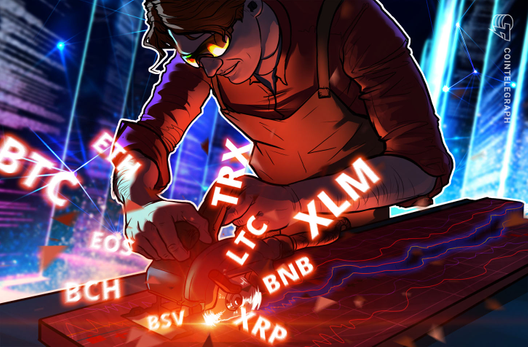 Bitcoin price looks weak but this fall below $8,500 might turn out to be a buying opportunity.

Fundstrat’s Tom Lee believes that cryptocurrencies “are network value assets” and as the number of people who hold the asset increases, the value of the cryptocurrencies would also move up. According to him, about half a million people use and own Bitcoin currently and if the number doubles, he expects Bitcoin (BTC) to easily reach his target of $25,000.

As more people learn about blockchain technology, they would understand cryptocurrencies better, boosting adoption. Zhao also expects other nations to follow China’s initiative but according to him, it would be very hard to overtake China.

The Dallas Mavericks chief technical officer David Herr said that only a handful of their fans use crypto for purchasing tickets and merchandise. According to their research and discussions, 99% of the population still find crypto to be complicated. This shows that various short-term hurdles need to be crossed before mass adoption happens.

While the fundamental picture is rosy for the long-term, the short-term looks uncertain. So, the big question on every trader’s mind is whether this is a good time to buy or can they buy later at a much lower price. Let’s analyze the charts.

Bitcoin has dipped below the 50-day SMA, which is a negative sign. It is currently close to the critical support at $8,467.54, which is 61.8% Fibonacci retracement level of the most recent up move. If this support cracks, a drop to $7,952.84 is likely.

The 20-day EMA has gradually started to slope down and the RSI has dipped into the negative territory, which suggests that bears have the upper hand. It is not a wise strategy to buy in a falling market.

Hence, we suggest traders wait for the decline to end and a reversal pattern to form before initiating long positions. The first sign of strength will be a move back above the moving averages. That will indicate that the current fall was only a scare to shake out the weaker hands. A breakout of the downtrend line will signal the resumption of the upward move.

There is no new development in Ether (ETH) as it extends its stay inside the $197.75 to $173.841 range. The flat moving averages and the RSI just below the midpoint indicate that the range-bound action will continue for a few more days. This tight consolidation shows a balance between demand and supply.

If the bears sink the price below $173.841, it will indicate that the sellers have overpowered the buyers and a drop to $151.829 is possible. A break below this level will resume the downtrend. Therefore, traders can protect their long positions with stops at $150.

XRP has been consistently losing ground in the past few days. The moving averages are on the verge of a bearish crossover and the RSI is in the negative territory. This shows that bears are in command. The price can now dip to the next support at $0.24508. If this support holds, the altcoin will remain range-bound between $0.24508 and $0.31491 for a few more days. But if the support cracks, a drop to $0.22 is likely.

As the decline has been gradual, it shows that the bulls are not panicking. Hence, we anticipate a recovery attempt within the next few days. If the XRP/USD pair rises above the moving averages, a retest of $0.31491 is possible. Therefore, we are not recommending to close the long positions yet. They can be held with the stop loss at $0.24.

Bitcoin Cash (BCH) has broken below the support of the $306.78 to $269.10 range. This triggered our recommended stop loss on the long positions. The price can now dip to the 50-day SMA where it is likely to find strong support.

If the BCH/USD pair quickly reverses direction from the current levels and climbs back above $269.10 once again, it will indicate that the current dip was a bear trap. The pair will pick up momentum after it breaks out of $306.78. We will wait for a new buy setup to form before proposing a trade for it once again.

Litecoin (LTC) is trying to find support close to the 50-day SMA. Both moving averages have flattened out and the RSI is just below the midpoint, which suggests a balance between demand and supply.

A break below the 50-day SMA will be a negative move as it will indicate a lack of buyers at higher levels. Conversely, if the bulls can carry the LTC/USD pair above $62.0764 to $66.1486 resistance zone, a move to $80.2731 will be on the cards. We suggest traders hold long their positions with a stop loss of $47.

The bears are attempting to sustain EOS below the support at $3.37. If successful, a drop to the 50-day SMA and below it to $2.9980 is likely. A break of this support will open the doors for a retest of $2.4001. Therefore, we suggest traders protect their long positions with a stop loss of  $2.95.

Conversely, if the price turns around from the current levels and rises above $3.37, it will indicate demand at lower levels. The EOS/USD pair will pick up momentum after it breaks out and sustains above $3.69.

The bulls failed to sustain Binance Coin (BNB) above the overhead resistance of $21.2378. This shows a lack of buyers at higher levels. The price has dipped back to the 20-day EMA, below which a drop to the 50-day SMA is possible.

If the BNB/USD pair bounces off the support at $18.30, it will remain range-bound for a few more days. The flat moving averages and the RSI close to the 50 level points to a consolidation.

The pair will pick up momentum on a break above $21.2378. For now, traders can maintain the stop loss on the long positions at $16.

After clinging on to the 20-day EMA for the past two days, Bitcoin SV (BSV) has resumed its journey to the support line of the descending channel. The 20-day EMA is flattening out and the RSI is just below the midpoint, which suggests range-bound action for a few days.

The BSV/US pair will show signs of strength if it breaks out and closes (UTC time) above the channel. Such a move will indicate that the minor pullback has ended and the bulls have asserted their supremacy.

On the downside, the pair will weaken if it breaks and sustains below the channel. We will wait for the price to sustain above the channel before suggesting a long position in it.

Stellar (XLM) is attempting to stay above the critical support at $0.072545. The uptrend line and the 20-day EMA are also located close to this support. Hence, we expect the bulls to defend it aggressively.

If the price rebounds off the current levels, it will face resistance at the downtrend line. A breakout and close (UTC time) above the downtrend line will be the first indication that the bulls are back in action.

Conversely, if the XLM/USD pair plummets and sustains below $0.072545, it can dip to the 50-day SMA. A break of this support can result in a retest of $0.056. We will wait for a buy setup to form before proposing a trade in it.

We will turn positive after the pair breaks out and closes (UTC time) above $0.0204880. Until then, we suggest traders remain on the sidelines.

BitMEX Ether Futures Trading Contracts Fall by Half in Wake of...