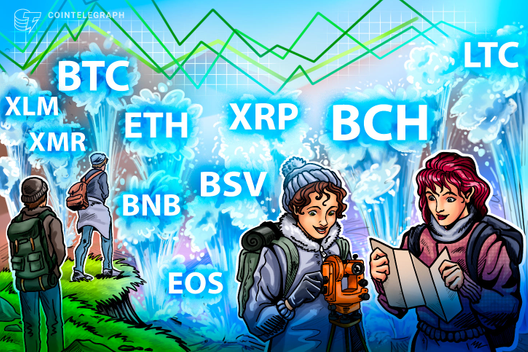 Which altcoins are turning up and setting up a short-term trading opportunity? Let’s analyze the charts.

Though institutional investors are professionals with years of experience under their belt, they have been slow to recognize and embrace cryptocurrencies, which is the new trend in the digital age. Conversely, retail traders who are considered amateurs have been quick to adopt cryptocurrencies and have benefitted immensely from it, according to Tyler Winklevoss. His twin brother, Cameron Winklevoss, said that Bitcoin resembles gold and it will act as a store of value in this digital age. Traders who do not invest now will miss out on this future.

However, Peter Schiff has a different opinion. During a recent debate, he stated that gold will eventually hit $5,000, but Bitcoin will never hit $50,000. This shows that many classical investors still do not realize the true value of the nascent asset class.

Should traders stay cautious or use the current dip to buy? While we have usually been conservative in our analysis, we will tweak our approach a little and will start suggesting even short-term trades, which can be considered by aggressive traders. These will have small target objectives and will be riskier than usual suggestions. Hence, long-term or medium-term investors with low risk appetite should stay away from these.

Bitcoin (BTC) has formed a series of higher lows in the past few weeks, which is a positive sign. It shows that bulls are not waiting for the price to fall to strong supports to buy, but are buying a little higher each time. As a result, we find a symmetrical triangle pattern developing on the chart.

The bulls will now attempt to push the price to the downtrend line of the triangle. A breakout of this level will indicate a resumption of the uptrend. Therefore, traders can buy on a breakout and close (UTC time) above the triangle with a stop loss of $9,000. The pattern target is $17,233.92, The rally might face resistance at $13,973.50, but we expect it to be crossed.

Our bullish view will be invalidated if the BTC/USD pair turns down either from the moving averages or from the downtrend line of the triangle and plunges below $9,080. Such a move will indicate selling at higher levels. The next level to watch on the downside is $7,451.63. Both moving averages are flattish and the RSI is just below 50, which shows a balance between buyers and sellers. Hence, we are not proposing a buy at current levels.

Ether (ETH) has broken out of the downtrend line. This shows that selling pressure has reduced in the short term. The bulls will now attempt a recovery, which will pick up momentum on a breakout and close (UTC time) above 20-day EMA.

Aggressive traders can buy on a breakout and close (UTC time) above 20-day EMA and keep a stop loss of $174. The target to watch on the upside is $235.70. There is a minor resistance at the 50-day SMA, but we expect it to be crossed. This is a counter-trend trade, hence, the position size should be kept at 50% of usual.

If the ETH/USD pair fails to ascend the 20-day EMA and turns down, it will retest the recent lows. A breakdown of $174.461 will resume the downtrend and a fall to $150 will be in the cards.

When a breakdown of a critical level fails to pick up momentum, it shows a lack of sellers at lower levels. This increases the probability of a pullback, catching many bears off guard. The failure of bears to capitalize on the breakdown of the $0.27795–$0.24508 support zone is a bullish sign. If buyers can propel XRP above the 20-day EMA and sustain the level, it will indicate strength.

Aggressive traders can buy on a close (UTC time frame) above the 20-day EMA and keep a stop loss of $0.24. If the price sustains above $0.27795, it will re-enter the range. We then expect it to gradually move up to $0.45 in the medium term. However, at current levels, this is a counter-trend trade, hence, we suggest traders keep the position size at about 50% of usual.

On the upside, there might be a minor resistance at the 50-day SMA, but we expect it to be crossed. The short-term target is $0.34229. Contrary to our assumption, if the XRP/USD pair reverses direction from the 20-day EMA and plunges below the yearly low, a drop to $0.19 is possible.

A breakout of the moving averages can carry the price to $360, above which we expect the BCH/USD pair to pick up momentum. Conversely, on the downside, if bears break below the neckline of the developing head and shoulders (H&S) pattern, the trend will turn negative. The next support on the downside is at $166.98 and below it, a fall to $105 is possible. We suggest traders wait for the price to break out of $360 before attempting long positions.

Buying when the price is below down-sloping moving averages might result in quick losses because it is difficult to predict the bottom in a downtrend. Though Litecoin (LTC) has held the support at $69.9227 for the past few days, a failure to rebound sharply shows a lack of conviction among buyers.

Unless the LTC/USD pair bounces above the 20-day EMA within the next three to four days, the likelihood of a breakdown below $69.9227 increases. If this support breaks down, the decline can extend to $58. Conversely, a breakout above the downtrend line will be the first sign that the trend is changing. Until then, we suggest traders stay on the sidelines.

Binance Coin (BNB) has held the support at $26.202 for the past two days. However, the lack of a strong bounce suggests that bulls are not aggressively buying at current levels. A breakdown of $26.202 can result in a fall to $24.1709, which is an important support. If this level gives way, the trend will turn negative.

Conversely, if the BNB/USD pair rebounds sharply from current levels, the important resistance to watch is the 50-day SMA, because bulls have not been able to scale this in the past few weeks. A breakout and close (UTC time frame) above the 50-day SMA will signal a probable resumption of the uptrend. The pair might face minor resistance at $32.50, above which a retest of lifetime highs will be in the cards. Traders can wait for the price to sustain above the 50-day SMA before initiating long positions with a stop loss of $26.

EOS again held the support at $3.30 on Aug. 21. This is the third time the support has held since July 16, which makes it a critical level to watch out for. If bulls can now scale above the 20-day EMA, it will increase the probability of a rally to $4.8719.

Nevertheless, if bears defend the 20-day EMA and the EOS/USD pair declines to $3.30 once again, the probability of a breakdown increases. Feeble rebounds from a strong support and repeated retests of the support level within a short span of time show a lack of demand. Below $3.30, the support levels to watch are $2.69 and below it $2.18. We are currently neutral on the pair.

Bitcoin SV (BSV) has been trading between the 20-day EMA and $130 for the past few days. This tight range is unlikely to sustain for long. Soon, we will see an expansion in volatility. If the price breaks out of the downtrend line and the 50-day SMA, a quick move to $188.69 is likely. We might suggest a short-term trade if the price sustains above the downtrend line.

However, if the price breaks down of $123.67, the BSV/USD pair can plunge to $107. This is a critical support to watch on the downside. If it breaks down, the pair will turn negative. As long as the price remains below the downtrend line, we do not find any buying opportunity because it indicates that bears have the upper hand. We will wait for the trend to change before recommending a long position.

Monero (XMR) continues to trade inside the $98.2939–$72 range. The price action inside the range is usually volatile and difficult to call, hence, it is best to either establish a long position on a breakout of the range or wait for the price to correct to the support to buy.

The XMR/USD pair has formed a symmetrical triangle and will make a decisive move after breaking out or breaking down of it. A breakout of the triangle can offer a buying opportunity with a target objective of $120, while a breakdown of the triangle can result in a fall to $60 and lower. Currently, we do not find any reliable buy setups, hence, we suggest traders remain on the sidelines.

Stellar (XLM) is stuck in a tight range of $0.072545–$0.065. While bulls are supporting the price at the lower boundary of the range, bears are defending the upper boundary. After a major breakdown, if the price does not follow through to the downside, it offers a buying opportunity because it indicates a lack of sellers at lower levels.

Therefore, aggressive traders can buy on a close (UTC time frame) above the 20-day EMA and keep the stop loss at $0.065. This is a counter-trend trade, hence, we recommend keeping the position size only about 50% of usual. The first target on the upside will be a move to the 50-day SMA and above it $0.097795.

Conversely, if the XLM/USD pair breaks below $0.065, it will resume the downtrend that can extend to $0.05.