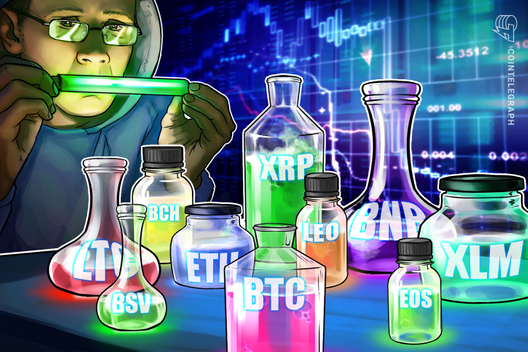 Keep a close eye on Bitcoin for the next few days as a strong bounce might offer a good buying opportunity for traders who missed the bus last time.

When Bitcoin (BTC) rallies sharply it does not leave a chance to buy. Traders then regret missing the bus. They promise themselves that they will buy on the next dip. However, when the prices correct, fear grips the traders and they again miss pulling the trigger. While there will be many reasons for a fall, unless the basic fundamental reason changes, traders should continue to look for buying opportunities.

CEO & chief investment officer of Morgan Creek Capital Management Mark Yusko believes that investors should use the fall in Bitcoin to buy because the fundamentals have been improving over the past few years. He said that similar to Amazon, there has never been a right time to sell Bitcoin.

The chief economist of ING Mark Cliffe said that Facebook’s Libra project has put pressure on the central banks to launch their own digital currencies within the next two to three years. The second-largest economy in the world has been working on its own digital currency but has shied away from giving a launch date. Upon completion, these projects can provide a big boost for the crypto markets. So, should investors buy now or can prices fall much lower? Let’s analyze the charts.

On Sept. 26, Bitcoin closed (UTC time) below the 200-day SMA for the first time since Apr. 02 of this year. This is a closely watched indicator in traditional markets. Usually, when price sustains below the 200-day SMA, institutional players avoid taking aggressive positions. However, if the price quickly reverses and climbs back above the 200-day SMA, it will indicate that the fall was a bear trap to scare off the weaker hands.

The next support on the downside is the $7,451.63-$7,337.78 zone. The RSI is in deeply oversold territory, which demonstrates that short-term selling has been overdone and a pullback is likely. However, we do not suggest buying in a falling market because it is difficult to predict where the decline will end and due to this, a logical stop loss cannot be maintained.

Nevertheless, if the BTC/USD pair bounces off strongly from the support zone, we might suggest a long position for aggressive traders. The first resistance on the upside will be the 200-day SMA and above it the breakdown point of the symmetrical triangle.

Our assumption of this being a good buying opportunity will be invalidated if the bears sink the pair below $7,337.78, which is 61.8% Fibonacci retracement of the entire rally.

The bulls have managed to close (UTC time) Ether (ETH) above the critical support of $163.755 for the past three days. This shows demand at lower levels. The RSI continues to form a positive divergence, which is a bullish sign.

If the bears fail to sink and sustain the ETH/USD pair below $163.755, aggressive buyers might start bottom fishing. The recovery from current levels is likely to face resistance at the 20-day EMA, which is sloping down. The next dip to $163.755 will give us a better idea on whether the bottom is in place or not. If the price drops below $150-$163.755 support zone, the decline can extend to $122.

XRP has been trading close to $0.24508 for the past two days. The bears’ attempts to sink the price to new yearly lows have failed, which shows demand at lower levels. However, unless the bulls achieve a strong bounce, we expect another round of selling.

Bitcoin Cash (BCH) has been gradually grinding lower, which shows a lack of buyers at these levels. The next support on the downside is at $166.98 and if that also breaks, the downtrend can extend to $105. However, as the RSI is deeply oversold, we anticipate a relief rally in the next few days.

The pullback from current levels can retest the neckline of the head and shoulders pattern. If the BCH/USD pair turns down from this resistance, the downtrend will resume. Nevertheless, if bulls can push the price above $300, a rally to $360 will be on the cards. We will wait for the decline to end and a new buy setup to form before proposing a trade in it.

Litecoin (LTC) bounced from close to the critical support of $49.3305 on Sept. 26. This is a positive sign as it shows demand at lower levels. However, if the bulls fail to push the price above $58 quickly, the bears will try to resume the downtrend once again.

A break below $49.3305 could drag the price to $30. With both moving averages sloping down and the RSI close to oversold territory, the advantage is clearly with the bears.

Any attempt to pull back will face resistance at $58 and above it at the moving averages. A breakout of $81 will indicate that the downtrend is over. We will wait for the LTC/USD pair to form a reversal pattern before proposing a trade in it.

After the large range day on Sept. 24, EOS has been relatively quiet in the past two days. The bulls are not buying aggressively because a bottom has not been confirmed yet. Similarly, the bears are taking it easy on selling because the cryptocurrency is oversold in the short-term, as suggested by the RSI.

If the bulls fail to push the EOS/USD pair above the overhead resistance at $3.1534, it is likely to resume its downtrend. The next support on the downside is at $2.20 and below that $1.55.

However, if the pullback finds acceptance above $3.1534, it can move up to the downtrend line. A breakout of the downtrend line will be the first sign that the downward move has ended. We do not find any reliable buy setups at current levels.

Binance Coin (BNB) continues to gradually slide lower. Though the RSI is deeply oversold, the bulls have not been able to start a pullback. This shows a lack of buyers even at these levels. The next support is at the bottom of the descending channel.

If the BNB/USD pair bounces off the support line of the descending channel, it might move up to $18.30, which is likely to act as stiff resistance. Above this, the next level to watch is the resistance line of the channel. The pair will show signs of a turnaround after the bulls push it above the channel. Until then, it remains in a downtrend. Therefore, we are not recommending a trade in it.

Bitcoin SV (BSV) continues to look weak as it has struggled to bounce even though the RSI is deeply oversold. This shows that the buyers anticipate a further fall. If the cryptocurrency fails to bounce soon, it can plunge to $48.640 in the next few days.

However, if the buyers step in and provide support at current levels, the BSV/USD pair might pull back to the breakdown level of $107. This is an important level to watch out for. If the price turns down from this resistance, it will resume its downtrend. However, if bulls push the price above $107 and sustain it, the pair might extend its recovery to $150. We will wait for a new buy setup to form before suggesting a trade in it.

Stellar (XLM) is attempting a pullback, which is facing resistance at the 20-day EMA. The positive divergence on the RSI is an encouraging sign. If the bulls can push the price above the moving averages and $0.072545, it will be the first indication that the downtrend might be over.

Conversely, if the bulls fail to scale the moving averages, the bears will attempt to resume the downtrend. A breakdown of $0.051014 will be a huge negative. We will wait for the XLM/USD pair to form a new buy setup before proposing a trade in it.

UNUS SED LEO (LEO) is in a downtrend but the bulls are attempting to form a bottom close to $1.0467. If the bears break below this minor support, the next stop is likely to be the lows at $1.0075. A breakdown to new lows will be a huge negative and can result in long liquidation that can drag prices to $0.80.

Conversely, if the bulls defend the support zone between $1.0467 and $1.0075, a pullback to $1.1217 is possible. A breakout of this resistance and the 50-day SMA will indicate that a bottom is in place. We will wait for the LEO/USD pair to rise above the 50-day SMA before turning positive.

Newest Crypto - December 2, 2022
0
Zipmex, the South Asian exchange that froze withdrawals due to a shortfall in liquidity earlier this year, has secured creditor protection for all...

We Have All Had A ‘Pizza Day Moment’ — What’s Yours?