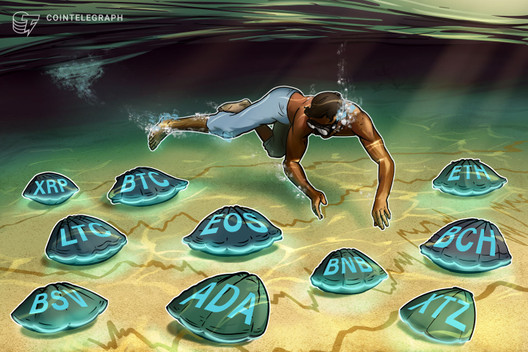 Bitcoin sold off as stocks corrected on June 11, but BTC and altcoins are failing to recover even as equities markets move higher.

The S&P 500 plunged 5.89% on June 11, its fourth-worst fall this year. This brought back memories of the sharp sell-off seen in March when investors dumped most asset classes as the coronavirus pandemic took hold.

Although gold managed to close in the green on June 11, Bitcoin (BTC) plunged 6.16%. This suggests that investors sought the safety of gold over BTC, the top-ranked cryptocurrency on CoinMarketCap.

The Organization for Economic Co-operation and Development said in a report that governments should prepare for a possible second wave of coronavirus cases. The OECD heavily emphasized the continuance of ultra-accommodative monetary policies and higher public debt until inflation and economic activity picks up and unemployment levels fall. 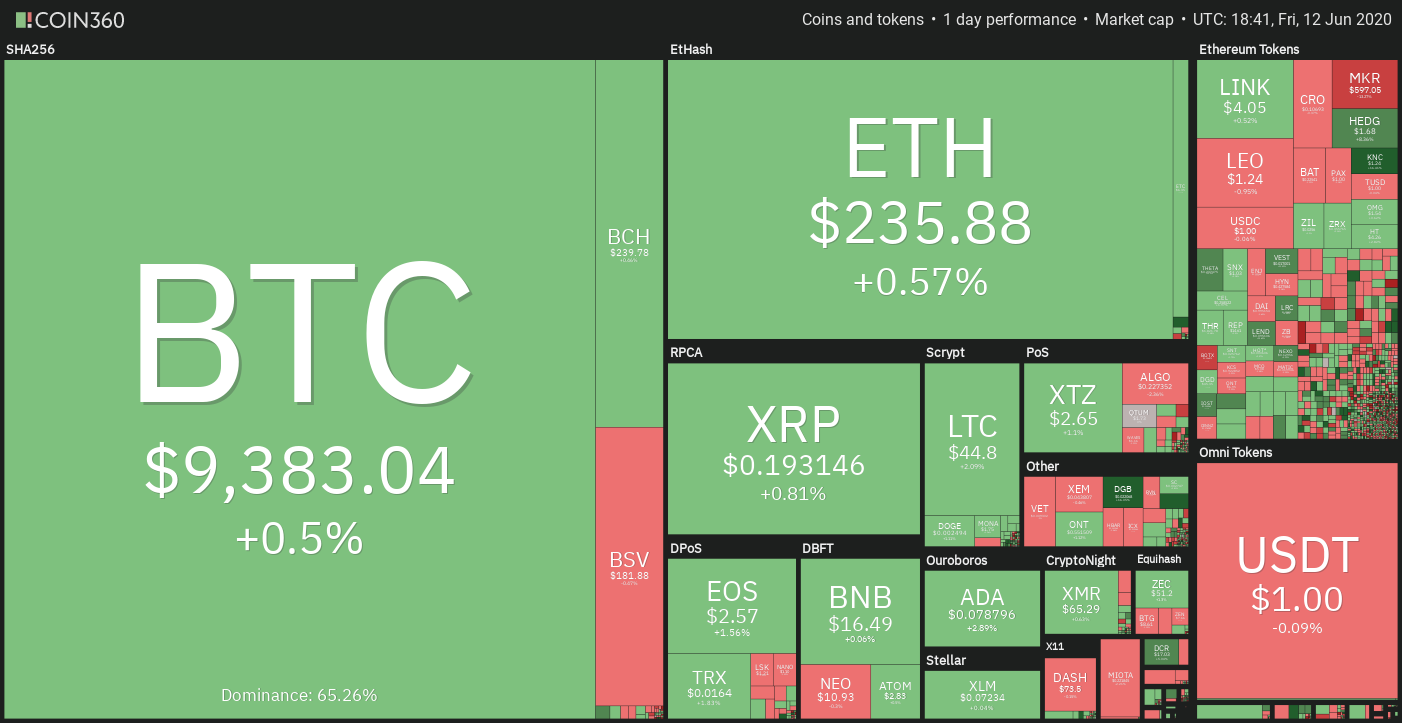 During the current crisis, the U.S. debt has crossed the $26 trillion mark. As the central banks balance sheets continue to balloon, several institutional investors may consider investing in higher risk assets like Bitcoin to hedge their portfolio against future currency crises.

If the second wave of coronavirus is as bad as medical experts predict, the short-term panic selling in cryptocurrencies cannot be ruled out but lower levels are likely to witness strong buying by long-term investors.

Bitcoin (BTC) broke above the resistance line of the symmetrical triangle and reached the five-figure mark on June 10. However, $10,000 again proved a stiff hurdle to cross as the price turned down sharply on June 11.

This suggests that the bears are aggressively defending the overhead resistance zone between $10,000 and $10,500.

On the other hand, if the bulls can scale the price above the 20-day EMA, another attempt to climb the $10,000–$10,500 zone is likely. If successful, the pair is likely to pick up momentum and start the next leg of the sustained uptrend.

Ether (ETH) broke above the $247.827 resistance on June 10 and 11 but failed to sustain it. This attracted profit booking that dragged the price back below the support line of the ascending channel on June 11.

The bulls again purchased the drop to the uptrend line, which makes this an important support to watch closely.

Currently, the bulls are attempting to push the second-ranked cryptocurrency on CoinMarketCap back into the ascending channel. If successful, a rally to $253.556 is possible.

Conversely, if the ETH/USD pair plunges below the uptrend line it will signal a possible change in trend.

The sharp drop in XRP was arrested at the support line of the symmetrical triangle on June 10. This is a positive sign as it shows that the bulls are defending this support aggressively. They will now attempt to push the price back to the downtrend line of the triangle.

A breakout of the downtrend line will be a positive sign and it could offer a buying opportunity to the traders.

Above the triangle, the third-ranked cryptocurrency on CoinMarketCap can rally to $0.235688 and then to the pattern target at $0.2707.

However, if the XRP/USD pair fails to sustain the rebound, the bears will try to sink the price below the triangle. If successful, a drop to $0.16 and then to $0.14 is likely.

Bitcoin Cash (BCH) broke above $255.46 on June 10 but could not scale above the $260 level. This resulted in profit booking by short-term traders and the price plunged back below the moving averages.

The bulls are currently attempting to push the fifth-ranked cryptocurrency on CoinMarketCap back above the moving averages. If successful, a rally to $255.46 is possible. The BCH/USD pair is likely to show strength above $260 and pick up momentum above $280.47.

Bitcoin SV (BSV) again failed to break above $200 on June 10. This attracted selling that resulted in a sharp fall on June 11. The bulls are currently attempting to defend the strong support at $170.

If successful, the sixth-ranked cryptocurrency on CoinMarketCap is likely to extend its stay inside the $170–$227 range. In a large range, the rebound off the support can offer a buying opportunity to the traders but if the BSV/USD pair breaks below the $170 support, a drop to $146.20 is possible.

If successful, the seventh-ranked cryptocurrency on CoinMarketCap will try to move up to $51. A breakout of this level will signal the start of a possible uptrend. Above this level, a rally to $64 is likely.

Conversely, if the LTC/USD pair turns down from $51, a few more days of consolidation can be expected. Both moving averages are flat and the relative strength index is just below the 50 level which points to a range-bound action for a few days.

The trend will turn in favor of the bears if the pair turns down from the current levels and plunges below the critical support at $39.

The moving average support finally gave way on June 11 and Binance Coin (BNB) dropped to $15.93. The bulls purchased the dip and are currently attempting to push the price back above the moving averages.

If successful, the eighth-ranked crypto-asset on CoinMarketCap will again try to rise above the overhead resistance of $18.1377. In doing so, the momentum is likely to pick up and a rally to $21.50 and $24 is possible.

Conversely, if the BNB/USD pair turns down from the moving averages and slips below $15.72 a drop to $13.65 is likely.

After failing to cross above the overhead resistance of $2.8319, EOS succumbed to selling pressure on June 11. This shows that the aggressive bulls who were expecting a breakout of $2.8319 dumped their positions.

The ninth-ranked cryptocurrency on CoinMarketCap is likely to show strength on a breakout and close (UTC time) above $2.8319. Conversely, a break below $2.3314 will tilt the advantage in favor of the bears.

Cardano (ADA) is currently attempting to resume the uptrend after bouncing off the 20-day EMA ($0.075) as suggested in the previous analysis. The 38.2% Fibonacci retracement level of the most recent leg of the up move is also close to the 20-day EMA and working as a strong support.

The first target objective on the upside is a retest of $0.0901373. If the 10th-ranked cryptocurrency on CoinMarketCap turns down from this level a few days of range-bound action is likely.

The pair will signal weakness if it turns down from the current levels and breaks below the 20-day EMA.

Tezos (XTZ) plunged below both moving averages on June 11 but the bulls aggressively purchased the dip to the support line of the descending channel. This is a positive sign as it shows that the bulls are still buying the dips.

However, the recovery is facing resistance at the moving averages. If the 11th-ranked cryptocurrency on CoinMarketCap turns down from the current levels, the bears will make another attempt to break below the channel.

If successful, a drop to the critical support at $2.24 is possible. A break below this level could start a new downtrend.

The first sign of strength would be a breakout of the resistance line of the channel. Above this level, a rally to $3.1384 and then to $3.60 is likely.