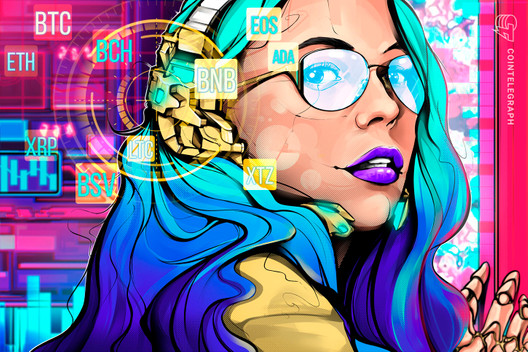 Bitcoin price remains range-bound, but as miners sell fewer coins and the BTC reserves on the exchanges drops, a possible up move could occur in the next few days.

The total crypto market capitalization was close to $270 billion on May 8 and currently, the metric stands at $275 billion. This suggests that the crypto markets have been largely stuck in a range for about a month.

As reported by Cointelegraph, Bitcoin (BTC) miners are holding on to their newly minted coins and this behavior usually occurs when Bitcoin holders expect higher price in the future. Data also shows that Bitcoin reserves on cryptocurrency exchanges have plunged to a 12-month low.

The fundamentals are pointing to a possible rally in Bitcoin, but do the technicals also project a bullish picture? Let’s find out.

The top-ranked cryptocurrency on CoinMarketCap is being squeezed between the 20-day exponential moving average ($9,499) and the resistance line of the symmetrical triangle. A tight consolidation near a critical resistance can be a sign of accumulation by the bulls.

The upsloping moving averages and the relative strength index in positive territory suggest that bulls have the upper hand. If the bulls can drive the price above the resistance line of the symmetrical triangle a retest of $10,500 is possible.

This is a critical level to watch out for. If the bulls can push the price above $10,500 a sustained up move is likely to begin as traders sitting on the sidelines will be forced to jump in.

Ether (ETH) is currently consolidating in an uptrend. It has been stuck inside a tight range of $247.827–$233.449 for the past few days. This suggests that both the bulls and the bears are waiting for the next trending move to begin.

A breakout of the $247.827– $253.556 resistance zone will signal that bulls have overpowered the bears. Above this zone, a rally to the resistance line of the ascending channel at $277 is likely.

The upsloping moving averages and the relative strength index above 60 suggests that bulls have the upper hand.

Conversely, if the bears sink the second-ranked cryptocurrency on CoinMarketCap below the $233.449–$227.097 support zone, a deeper correction to the 50-day simple moving average ($209.52) is possible.

After failing to rebound off the moving averages, XRP is currently under pressure from sellers. If the bears can sink the price below the immediate support of $0.19614, a drop to $0.19130 is likely.

On a break below $0.19130 a retest of the critical support at $0.17372 is possible. If this support gives way, the third-ranked cryptocurrency on CoinMarketCap will complete a bearish descending triangle pattern, which will be a huge negative.

This bearish view will be invalidated if the bulls drive the price above the downtrend line. Above this level, a rally to $0.23612 is possible. However, as the XRP/USD pair has been a huge underperformer for the past few months, traders should be careful before initiating fresh long positions.

Although Bitcoin Cash (BCH) rose above the overhead resistance of $255.46 on June 4, the bulls could not sustain the breakout. The price dipped back below $255.46 on June 6 and this suggests a lack of demand at higher levels.

If the fifth-ranked cryptocurrency on CoinMarketCap breaks below the moving averages, a drop to $217.55 is possible.

On the other hand, if the bulls can sustain the price above $255.46, a rally to $280.47 is likely. This is a critical resistance to watch out for because if this is taken out, the possibility of a new uptrend increases.

As the BCH/USD pair has spent a long time inside the range, the next trending move is likely to be a strong one.

The lack of a trending move has driven the traders away from Bitcoin SV (BSV). Both moving averages are flat and the RSI is just below the 50 levels, which suggests a balance between supply and demand.

If the bears can sink the sixth-ranked cryptocurrency on CoinMarketCap below $186, a drop to $170 is possible. A break below this support could start a new downtrend.

Conversely, a strong bounce off $170 will indicate that the bulls are buying on dips to the bottom of the range. That could keep the BSV/USD pair range-bound for a few more days.

On the upside, the next trending move is likely to start above $227. Until then, the price action is likely to be tepid and directionless.

On the other hand, if the seventh-ranked cryptocurrency on CoinMarketCap rebounds off the current levels, the bulls will make another attempt to climb above the $50.7864–$52.2803 resistance zone. If successful, a new uptrend to $64 is likely.

As the LTC/USD pair has been stuck in a range, the price action is likely to remain volatile with both the bulls and the bears attempting to assert their supremacy. The next trending move will start on a breakout of $52.2803 or on a break below $39.

As the pair has spent a long time inside the range, a breakout of it is likely to be a significant event that can offer an opportunity to the traders.

After defending the overhead resistance of $18.1377, the bears are now attempting to sink

Conversely, if the eighth-ranked crypto-asset on CoinMarketCap bounces off the moving averages, the bulls will make another attempt to clear the overhead resistance.

If successful, the trend followers and the momentum traders are likely to jump in. That can drive the BNB/USD pair to $21.50. The moving averages are gradually sloping up and the RSI is just above the midpoint, suggesting that bulls have a marginal advantage.

EOS has failed to break out and sustain above $2.8319 for the past three days. This suggests that the bears are aggressively defending this resistance. If the bears sink the altcoin below the moving averages, a drop to $2.3314 is possible.

Conversely, if the ninth-ranked cryptocurrency on CoinMarketCap rebounds off the moving averages, the bulls will make another attempt to push the price above $2.8319.

If successful, a rally to $3.1104 is possible. A breakout of this resistance will signal the start of a potential uptrend with a target objective of $3.8811.

However, if the EOS/USD pair turns down from $2.8319, it will extend its stay inside the range for a few more days. The pair will turn negative on a break below $2.3314.

Cardano (ADA) is currently correcting in a strong uptrend. If the bulls do not give up much ground, it increases the possibility of resumption of the uptrend. Both moving averages are sloping up and the RSI is in the overbought zone which suggests that bulls are in command.

A bounce off this zone will indicate that the bulls are not waiting for a deeper correction to get in. This increases the likelihood of a breakout of $0.0901373. Above this resistance, the 10th-ranked cryptocurrency on CoinMarketCap can rally to the $0.1–$0.10652 zone.

This bullish view will be invalidated if the ADA/USD pair dips below the 50% Fibonacci retracement level of $0.0705811.

Tezos (XTZ) has been trading inside the intraday range made on June 2. The bears attempted to drag the altcoin below the 20-day EMA ($2.84) on June 7 but could not hold on to the lower levels.

This suggests that the bulls are aggressively defending the 20-day EMA. If they can carry the 11th-ranked cryptocurrency on CoinMarketCap above the $3.073–$3.138 resistance zone, the momentum is likely to pick up and drive the price above the next resistance at $3.3367. Above this level, the rally can extend to $3.80.

This bullish view will be invalidated if the XTZ/USD pair turns down and slides below the moving averages. Such a move will indicate that the bears are aggressively defending the overhead resistance at $3.073.