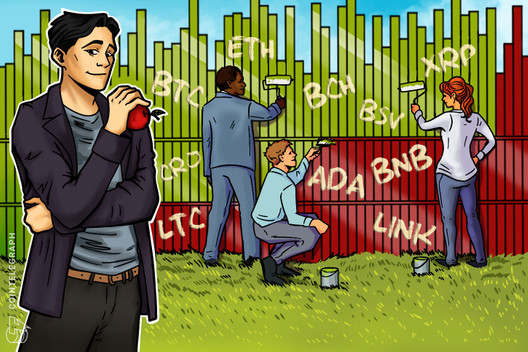 Bitcoin and a few altcoins are showing signs of weakness, which could result in a minor dip in the next few days.

Grayscale Investments recent Q2 report shows that the firm took in $905 million into Bitcoin (BTC) and other altcoins. In Q1 of this year, the inflow into various Grayscale products was $503.7 million. The sharp increase in investments indicates that the institutional investors are building positions when the price of the top-ranked asset on CoinMarketCap is stuck in a range as they expect it to rise in the future.

However, in the short-term, the U.S. Federal Reserve’s policy actions might dictate the next directional move. Although the economy is showing signs of recovery, several sectors are still struggling as coronavirus cases surge across the world. Therefore, investors are hopeful that the Fed will extend the current stimulus programs which are slated to end soon.

Any disappointment is likely to result in a sharp drop in the equity markets as investors rush to lock in their gains. As Bitcoin’s correlation with the S&P 500 is high, it could also follow suit and breakdown from its range. Such a move could also result in profit booking in the altcoins that have been outperforming Bitcoin for the past weeks.

Bitcoin (BTC) has been gradually giving up ground in the past few days and has now reached the trendline of the ascending triangle. If this support breaks down, it will invalidate the bullish pattern, which is a bearish sign.

The bulls are likely to aggressively defend the $8,130.58 support, which could keep the pair range-bound for a few more days.

However, if the pair bounces off the trendline and rises above the moving averages, a rally to the $10,000–$10,500 zone is likely. Without momentum, the likelihood of bulls scaling above this zone is bleak.

Although the price action is still dull, the pair has been falling gradually for the past few days, which suggests that the bears are attempting to make a comeback. With the price trading below both moving averages and the relative strength index below the 50 level, the advantage might be slightly shifting in favor of the bears.

Ether (ETH) broke below the moving averages on July 16, which is a negative sign. This increases the possibility of a fall to the support of the $216.006–$253.556 range. If the bulls defend the support at $216.006, the range-bound action is likely to continue.

The 20-day exponential moving average ($236) has flattened out and the RSI has dipped just below the 50 level, which suggests a balance between the bulls and the bears.

If the bears sink the price below the support at $216.006, the second-ranked cryptocurrency on CoinMarketCap can decline to $178.506.

On the other hand, if the ETH/USD pair turns up from the current levels and breaks out of $253.556, a rally to $288.599 is likely. As the price is currently in the middle of the range, it is difficult to predict the direction of the next breakout.

However, if the bears defend the resistance at $0.214616, the fourth-ranked cryptocurrency on CoinMarketCap could again drop to the moving averages and remain range-bound between these two levels for a few days.

Bitcoin Cash (BCH) dipped to the $217.55 support on July 16. The bulls are currently attempting to defend this support and if they succeed, the altcoin is likely to extend its stay inside the $217.55–$246 range for a few more days.

The 20-day EMA ($231) has started to slope down and the RSI has dipped into the negative territory, which suggests that bears have a slight advantage. If the fifth-ranked cryptocurrency on CoinMarketCap breaks below $217.55, a retest of $200 is likely.

Cardano (ADA) remains in a strong uptrend and has formed a pennant, which is a continuation pattern. Both moving averages are sloping up and the RSI is in the positive territory, suggesting that bulls have the upper hand.

This bullish view will be invalidated if the sixth-ranked cryptocurrency on CoinMarketCap breaks below the pennant and the 20-day EMA ($0.113). Such a move will signal weakening momentum that could pull the ADA/USD pair to $0.10.

Bitcoin SV (BSV) slipped below both moving averages on July 16 and is currently finding support at $170. However, the failure of the altcoin to bounce off this support increases the possibility of a break below it.

If the $170 support cracks, the seventh-ranked cryptocurrency on CoinMarketCap can drop to the critical support at $146.20. Such a move will be a huge negative as it will suggest a lack of demand at higher levels.

However, if BSV/USD bounces off $170 and rises above the downtrend line, the bulls will again try to carry the price to $200.

Chainlink (LINK) resumed its uptrend on July 15 as it broke above the resistance at $8.48, however, the up move stalled at $8.9080. The altcoin formed an inside day candlestick pattern on July 16 and has been trading in a smaller range today.

Usually, the inside day candlestick pattern is considered as a continuation pattern, with the breakout happening in the direction of the prevailing trend.

If the bulls can push the price above $8.9080, the eighth-ranked cryptocurrency on CoinMarketCap can rally to the $10–$11 zone, which is likely to act as a stiff resistance.

This bullish momentum could weaken if the bears sink the price below $7.8309. Such a move could signal a deeper correction to $6.8221, which is the 50% Fibonacci retracement level of the most recent leg of the rally.

Litecoin (LTC) has been trading inside the $39–$46 range for over a month. Currently, the price has dipped below both moving averages, which increases the possibility of a drop to the support of the range at $39.

The bulls are likely to defend the $39 levels aggressively as this support has not been broken down convincingly since April 2. A strong bounce off this level will indicate that the range-bound action is likely to extend for a few more days.

However, if the bears sink the ninth-ranked cryptocurrency on CoinMarketCap below $39, a new downtrend is likely. Trading opportunities could present either on a strong bounce of $39 or on a breakout and close above $46. A new uptrend can be expected if the LTC/USD pair sustains above $51.

Binance Coin (BNB) has been sustaining below the breakout level of $18.20 for the past few days, which suggests that the breakout on July 12 was a bull trap. The only solace is that the bulls have managed to defend the 20-day EMA ($17) on the way down.

The bulls will again attempt to propel the price above the $18.20–$19 resistance zone. If they succeed, the tenth-ranked crypto-asset on CoinMarketCap is likely to rally to $21.50 and if this resistance is scaled, the next target to watch out for is $22.93.

However, if the price slips below the moving averages, the BNB/USD pair can correct to the trendline of the ascending triangle. The flattish moving averages and the RSI just above the midpoint suggests a range-bound action between the 50-day simple moving average ($16.70) and $18.20 for a few days.

Crypto.com Coin (CRO) remains in an uptrend with both moving averages sloping higher and the RSI in the positive territory. However, the failure of the bulls to push the price above $0.146157 indicates profit booking at higher levels.

The bears are now likely to sink the 11th-ranked cryptocurrency on CoinMarketCap towards the 20-day EMA ($0.135), which has acted as a strong support during previous corrections.