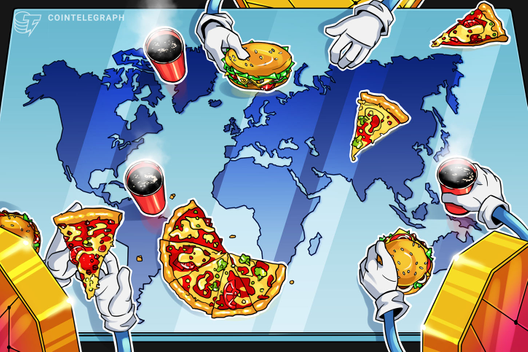 Earlier on, when Bitcoin (BTC) arrived on the scene, most cryptocurrency enthusiasts held on to their coins, as there were only so many places they could be spent. Nowadays, the list of marketplaces and retailers accepting Bitcoin and other cryptocurrencies is significantly larger, providing crypto enthusiasts with more options for making real-world purchases.

After all, with recognizable organizations like Microsoft and Wikipedia now accepting Bitcoin as payment, conversations about Bitcoin and the power of cryptocurrencies are becoming more prominent.

Granted, there are some jurisdictions that do not consider Bitcoin or any other cryptocurrency as legal tender. Despite this set back, even big tech companies like Facebook are coming up with payment systems that mimic cryptocurrencies.

Here are some of the leading retailers, merchants and companies that will let you book flights and hotels, buy coffee or pizza, or even go to space with crypto.

Pay for a burger in Germany with crypto

The German branch of fast-food restaurant chain Burger King now claims to accept Bitcoin as payment for its online orders and deliveries, but this is not the first time Burger King has warmed up to Bitcoin as a form of payment.

The company, headquartered in Florida in the United States, had its Russian branch announce in 2017 that it would start accepting Bitcoin payments, but it ultimately did not take off. The global fast-food retailer reports an annual revenue of about $20 billion and serves about 11 million customers around the world. If all its outlets move to accept Bitcoin as payment, cryptocurrency adoption would inevitably spread.

Spend crypto at Starbucks and other places

For crypto payments to gain traction, merchants need to implement systems that enable swift and easy cryptocurrency spending. Starbucks is one of the companies taking advantage of this concept through Flexa, a U.S.-based payment startup that is helping the cafe giant, as well as dozens of other companies, accept cryptocurrency payments.

The company developed an app called Spedn that enables crypto holders to make purchases with merchants like Starbucks. The company’s CEO believes that by making cryptocurrencies spendable in the mainstream, commerce will realize the full benefit of blockchain technology all over the world.

Crypto enthusiasts in Silicon Valley’s Palo Alto might already be familiar with Coupa Cafe for other reasons apart from its coffee and food. Through its partnership with a Facebook software developer, Coupa Cafe has been accepting Bitcoin as payment since 2013.

Reports show that the cafe received a steady stream of Bitcoin revenue as soon as they started implementing crypto payments — a clear sign of how eager its customers were to pay in Bitcoin. Coupa Cafe is among the few physical businesses in Palo Alto that accept Bitcoin at the moment. The cafe owners believe that their collaboration with the Facebook software engineer will create more traction in terms of Bitcoin adoption.

With over 50,000 takeaway restaurants listed on its United Kingdom-based site, OrderTakeaways is one of the surest ways to get a pizza paid for with crypto delivered to your doorstep. The company has been accepting Bitcoin payments for online takeout orders since 2018. And other similar services include the Korean platform Shuttledelivery as well as German-based service Lieferando and its subsidiaries in several other countries.

Related: Blockchain for Food, How the Industry Makes Use of the Technology

Apart from online orders, crypto can also be spent at a regular Subway restaurants. As early as 2013, several Subway branches started accepting Bitcoin as payment. Now, for a fraction of a Bitcoin, a Subway sandwich can be purchased at select restaurants.

Pay with Bitcoin to tour space

Besides buying food and inexpensive, day-to-day items with crypto, a trip to space can now be bought with Bitcoin. That’s right. Richard Branson’s space tourism company, Virgin Galactic, started accepting Bitcoin as payment as far back as 2013. Although Branson’s predicted date for the first commercial flight has been pushed back several times, the company achieved its first suborbital space flight last year. Perhaps soon, people will be able to tour the moon on crypto’s dime.

A brick-and-mortar American jewelry company called Reeds Jewelers accepts Bitcoin for both its physical and online stores. What’s more, if a purchase is worth more than $25,000, the company provides free armored delivery for safety. Other jewelry companies accepting Bitcoin include Blue Nile Jewelry, Stephen Silver Fine Jewelry and Coaex Jewelry, to name a few.

A big advantage of purchasing large ticket items — like a diamond — with crypto is that it makes moving around large amounts of money cheap and effortless. Reports show that more Silicon Valley investors are buying jewelry with Bitcoin. Last year, Stephen Silver Fine Jewelry reported a 20% growth in crypto transactions, leading to a boost in the company’s sales. The company has been accepting Bitcoin since 2014.

Gyft, a digital platform that allows users to buy, send and redeem gift cards, was one of the first merchants enabling cryptocurrency adoption to gain traction in the real world. The mobile gift card app allows Bitcoin to be used to purchase gift cards from several retailers, some of which include Burger King, Subway, Amazon and Starbucks. The company has also partnered with popular crypto exchange Coinbase to enable users to buy gift cards from their Coinbase wallets.

Travel and pay in Bitcoin

If a traveler only has Bitcoin at their disposal, the following merchants will gladly offer services in exchange for it. TravelbyBit, a flight and hotel booking service, accepts cryptocurrencies like Bitcoin, Binance Coin and Litecoin (LTC) as payment.

Related: From Malta to Prague: What Is the Most Crypto-Friendly Travel Destination?

With a network of over 300 crypto-friendly merchants, the platform is one of the biggest supporters of crypto adoption. TravelbyBit can also alert you to upcoming blockchain events in order to interact with other crypto enthusiasts from around the globe. Other platforms to book flights with crypto include Destinia, CheapBizClass, CheapAir, AirBaltic, Bitcoin.Travel and ABitSky, among others.

Use crypto to book a five-star hotel in Zurich

If ever one finds themselves traveling to Zurich Switzerland, either BTC or Ether (ETH) can be used to pay for a stay in a five-star hotel in Zurich. In May 2019, five-star hotel and spa Dodler Grand announced that it will start accepting Bitcoin and Ether as payment.

The hotel has partnered with a fintech firm Inacta as well as Bity (a Swiss-based crypto exchange) to facilitate the payment and conversion of crypto to fiat money. The hotel boasts an amazing view of the Swiss landscape among other enticing amenities that come with a five-star hotel.

Pay for electronics and more with crypto

For all the gadget lovers, there are a bunch of platforms that allow electronic purchases with cryptocurrency. Newegg, for instance, is an electronic retail giant that uses BitPay to process payments made with digital currencies. Even though one cannot get refunds for Bitcoin purchases, Newegg has a good reputation for quality items.

Plus, the company boasts its being among the first merchants to support cryptocurrency adoption. Other platforms for gadget junkies include Eyeboot (a platform that sells crypto mining rigs in exchange for crypto), Microsoft, FastTech and Alza (a U.K.-based online store that sells phones and beauty products).

It seems clear that more retailers are warming up to the idea of accepting cryptocurrencies. There is still a long way to go before full adoption can be achieved, but many companies have nevertheless benefited from being early adopters. Despite the volatile price movements of cryptocurrencies, all evidence points to a future cashless society that uses digital currencies, and crypto is leading the way.

The Cardano Foundation will preserve its independence, says new CEO