This marked the seventh consecutive weekly gain for BTC, which has posted stellar performances ever since the mid-March capitulation lows.

Although the seven consecutive weeks may mean nothing to readers, it is a strong technical occurrence that may signal that even more upside is on the table for the months ahead.

Bitcoin Could Be at Start of Next Macro Rally

This would suggest that should history repeat itself, the cryptocurrency is on the verge of yet another bull run. 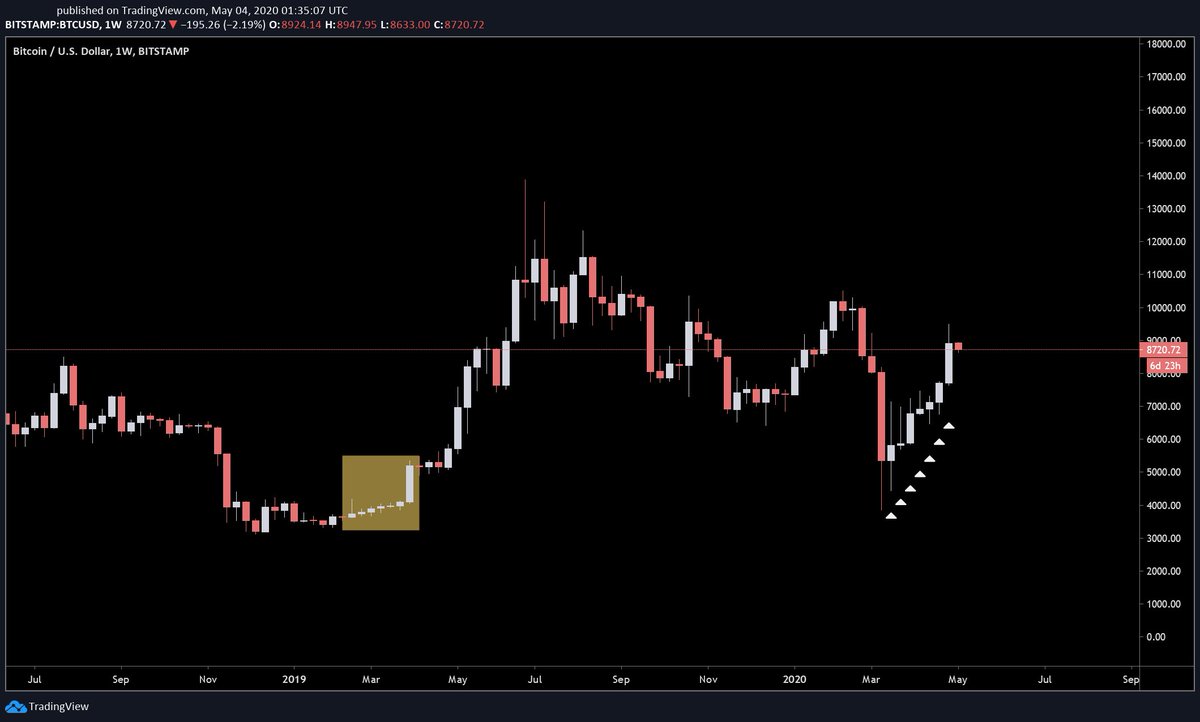 Adding credence to the idea that Bitcoin is on the verge of a bull run is the fact that eight days away is the block reward halving, estimates suggest.

Some are under the belief that the halving may actually cause a crypto sell-off, but there is growing evidence to think that this is not the case. Namely, there is a Google Trends and an anecdotal correlation between the Bitcoin halving and the public’s propensity to buy BTC.

Once the halving comes to pass, the number of coins issued per day will be cut in half, decreasing the amount of Bitcoin supply on the market. Couple this with a positive demand shock and prices should theoretically increase over time, but maybe not instantly.

This Trend Should Be Followed By More Gains

According to an in-depth analysis of Bitcoin’s consecutive weekly candles by a prominent cryptocurrency chartist and technician, last week’s rally suggests BTC should post gains this week too.

His study suggested that when the crypto has registered seven weeks of consecutive gains, there has always been a rally in the eighth week. The following message was shared to his Telegram channel on the matter:

“We are currently at 7 consecutive green weeks. We’ve never stopped at 7 before. We have stopped at 8 three times.”

This optimistic outlook can be corroborated by more traditional technical trends.

As reported by NewsBTC previously, one well-known trader remarked that there is a strong confluence of reasons to be short to medium-term bullish on Bitcoin at the moment.

The confluence of reasons, which some would dub a “perfect storm,” is as follows:

Related Reading: Every Time Bitcoin Flashed This Signal Since 2015, a Boom Followed. It’s Back

Polychain and a Chinese Bank Are Betting Millions on This Token...