Cryptocurrencies are constantly subject to exchange rate fluctuations and are characterized by high price volatility. For making crypto money more useful and more stable, a special type was created: stablecoins.

Stablecoin is a cryptocurrency whose value is tied to some valuable asset. This asset could be fiat money, precious metals like gold and silver, oil or almost anything that has tangible value. The price of a stable cryptocurrency is formed in direct proportion to the established asset.

Very early stablecoins like Tether were fiat-pegged, but as time went on, developers began to associate their stablecoins to other assets such as gold. Here are some of the most notable stablecoins backed by precious items. 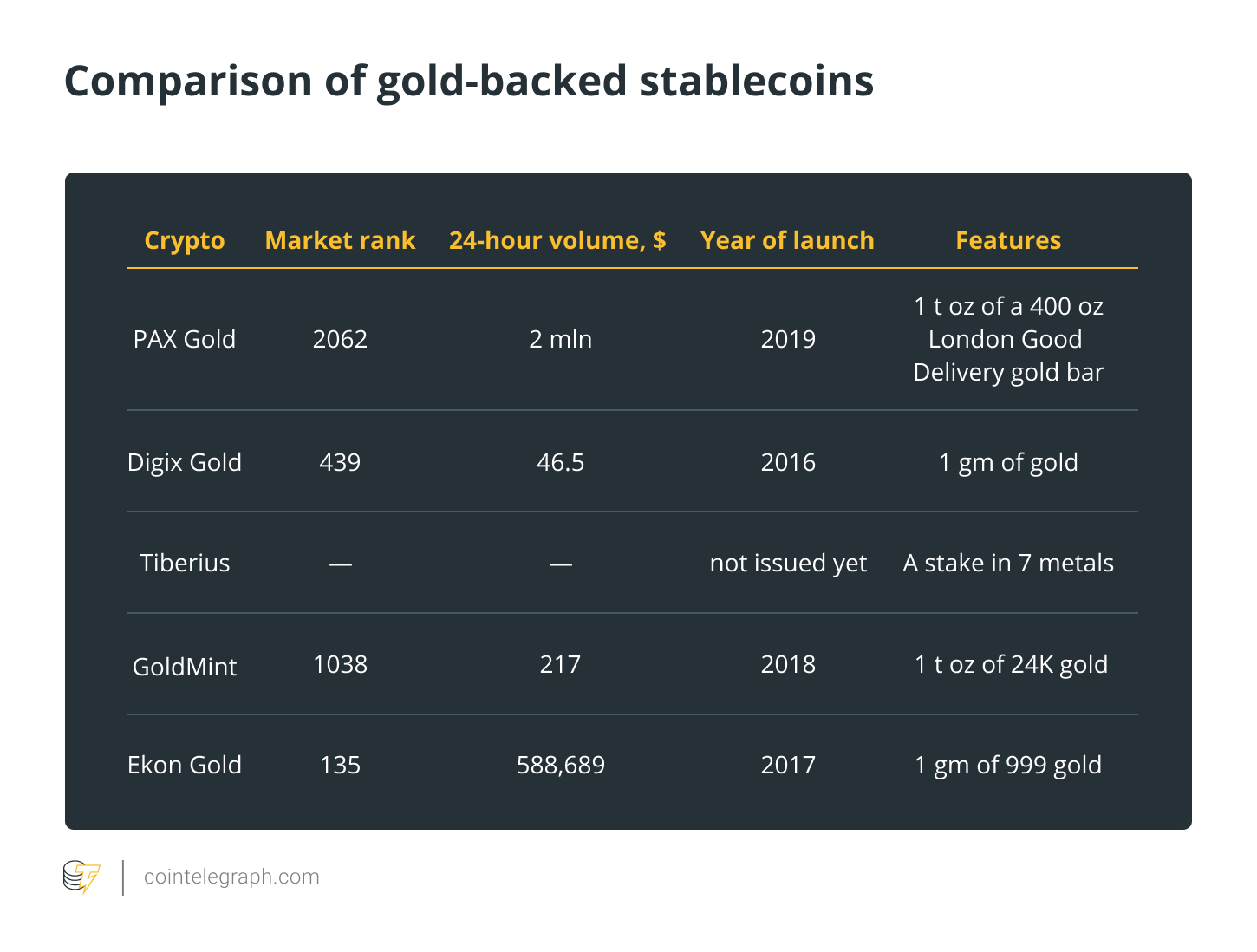 Paxos Standard Token (PAX) has been actively used by customers of popular crypto exchanges since 2018. It is tied to the United States dollar at 1:1 and stands out among other stablecoins in that it was approved by the New York State Department of Financial Services (NYDFS). The coin uses Ethereum smart contract.

In March 2019, the startup announced that it was preparing to issue a new digital token, backed by precious metals and stocks. Subsequently, in early September, Paxos announced the launch of a stablecoin, the price of which is secured by gold. PAX Gold (PAXG), it is based on the Ethereum blockchain and meets the ERC-20 standard.

The company claims to have received approval from the NYDFS for the issuance of PAX Gold tokens. Each PAXG token gives users ownership of one ounce of gold held at Brink’s London vault. The token can be redeemed in exchange for a physical gold bar at partner organizations, for example, New York Bullion Exchanges.

Furthermore, users can convert tokens into fiat currency or gold and vice versa. In addition, information on the specific gold bar to which a PAXG is attached is available to token holders. They can see the serial number, brand code, weight and thickness of the ingot.

Paxos charges a fee for transactions within the blockchain, as well as for the creation and redemption of a token. However, no commission is charged for the storage of gold to which PAXG is attached.

Digix DAO is a project that was developed with the goal of tokenizing real assets, particularly gold. It is based on Ethereum blockchain and provides users with the ability to conduct operations with a virtual version of gold. Two types of cryptocurrencies have been developed for the project: Digix Gold (DGX) and Digix DAO (DGD).

Digix Gold is a stablecoin tied directly to gold. The price of one coin is equivalent to 1 gram of gold. To ensure the exchange rate, gold bullion approved by the London Association of the Precious Metals Market has been placed in the bank account.

Digix was created in 2014 and is registered in Singapore. Its predecessor, Xcp, was unsuccessful. In May 2015, a meeting of Ethereum Foundation members was held in Singapore, to which developers proposed cooperation in promoting Ethereum together with Digix.

On Jan. 15, 2016, a fully functioning beta platform on Frontier was launched. A crowdsale took place at the end of March 2016 and $5.5 million was collected on the first day. The total issue is 2 million DGD, of which 15% is intended for developers.

The main idea behind ​​Digix DAO is to acquire a real asset (gold), store it (transfer to the blockchain), and evenly distribute the shares among all participants. At the same time, all owners of tokens are also entitled to influence the development of the platform.

The scheme is simple: developers offer investors various project development algorithms from a professional point of view. Investors need to participate in the vote in order to collectively find the most correct solution and come to a common consensus.

Digix Gold coins are liquid, they can be exchanged at any time for gold or other cryptocurrencies. Coins are available only on the Digix marketplace, where they can be purchased with Ether. Tokens are in the Ethereum EIP20 format, allowing them to be used for Ethereum contracts.

With the growth of prices for precious metals, the value of DGD will also go up, which can greatly strengthen the token’s position in the market. But even if the demand for a coin suddenly disappears completely, investors will still not be selling at a loss, as they can sell their gold at market price.

GoldMint is a blockchain-based platform using Gold digital assets that are 100% backed by physical gold or exchange-traded funds (ETFs).

GoldMint helps traders and investors manage volatility risks and receive competitive commissions for products sold through GoldMint to financial institutions, pawnshops and other business as well as individual stakeholders.

GoldMint depends on two native tokens — Gold and MNT. The first is an investment instrument fully backed by physical gold and/or ETFs. One Gold token is equivalent to one ounce of gold on the Global Authority for Precious Metals (LBMA).

According to GoldMint CEO Dmitry Pluschevskiy the platform works as so: Users receive a loan from any of the project partners around the world for their gold product, which then gets into the Custody Bot repository. At the same time, the product passes through an automatic diagnostic system built into Custody Bot while information about the weight and sample of the product is recorded in the MINT blockchain network.

The proceeds from the sale of Gold are invested by GoldMint into gold assets. GoldMint is aiming for tokens to be redeemed on its website to the investor’s personal account, where all Gold crypto assets at the current price of gold can be liquidated either instantly or within a certain period of time and without any additional fees.

Swiss blockchain startup Eidoo announced the creation of its stable coin in September 2017, tied to the price of gold. The stablecoin is called Ekon Gold and is an ERC-20-compliant token that will be available in the multi-currency wallet and on the hybrid decentralized exchange of the project. It is only possible to exchange Ekon for one gram of 999 gold in a special store in Switzerland in insured safe deposit boxes and audited by independent auditing company PluriAudit SA once every 90 days.

To purchase the token, it is necessary to download the Eidoo app and, in order to comply with AML regulations, complete the KYC procedure up to Tier 2.

In October 2017, Eidoo raised $27.9 million during the token sale and received a license from the Swiss Financial Services Standards Association (VQF) under the national financial regulator, FINMA.

The Swiss company, Tiberius Group AG, announced the issuing of the Tiberius token in September 2018. The coins are characterized by high stability, since they are backed by a basket of seven precious metals.

The group is preparing to issue a cryptocurrency supported by non-ferrous and precious metals such as copper, aluminum, gold, platinum, tin, nickel and cobalt, according to Bloomberg.

According to CEO Giuseppe Rapallo, the reason for this delay was the desire to achieve diversification, which should make the coin even more attractive and more stable. At the same time, buying a coin will be equivalent to investing in the metals and the technologies associated with them, such as electric vehicles, robots, solar energy, artificial intelligence and others.

A cryptocurrency-based monetary system seemed at first an unfeasible decision, given the fact that crypto is one of the most volatile asset classes, but stablecoins backed by tangible assets have become a viable option to anyone wanting to invest in precious metals without the headache of storing or transporting them.

Additionally, gold-backed stablecoins are similar to gold funds and are thus deemed as safe investments, as argued by Digix Gold’s co-founder and COO Shaun Djie:

“The crypto market has generally reacted well to using stablecoins as a mode of payment, store of value and a hedge against the volatility of most cryptocurrencies. It would not be so much of a district in cryptocurrencies but rather, an alternative to having something more stable and well-recognized store of value.”

Newest Crypto - July 2, 2022
0
Esteemed artist Miltos Manetas will tokenise 50% of his Julian Assange portraits, with the goal of raising awareness for the imprisoned activist. To...

Ripple (XRP) Retreats From Key Resistance But Bulls Are Comfortable