With the halving just a few hours away, investors and “hodlers” alike are growing overwhelmingly bullish about what the future holds for Bitcoin.

Venture capitalist Tim Draper, for instance, argues that the supply shock could see the flagship cryptocurrency surge towards $250,000. Meanwhile, former hedge fund manager Raoul Pal believes that BTC may skyrocket to $1,000,000 within the next three years.

The stakes around the upcoming block rewards reduction event are high and even billionaire Paul Tudor Jones affirmed to have 2% of his assets in BTC.

Regardless of the bullishness surrounding the pioneer cryptocurrency, data shows that the immediate outcome after the halving is not always optimal.

Bitcoin May Be Poised to Disappoint

IntoTheBlock revealed in a recent tweet that despite the popular belief that the halving is the catalyst for a full-blown bull market, that is not accurate most of the time. The machine learning and statistical modeling firm stated that following the 2016 halving Bitcoin entered a prolonged stagnation phase.

The bellwether cryptocurrency consolidated between $650 and $680 for over a month before its price took a 27% nosedive. This correction took a significant number of investors out of their long positions as they expected different price action.

“People often think that with the Halving comes a bull run, but when you take a closer look at the price behavior during the 2016 Halving we see that the Bitcoin price remained steady for over a month, followed by a strong correction. The real halving bull run came 2 months later,” said IntoTheBlock.

Now, a similar market behavior might be evolving, which coincides with OKEx’s outlook.

A Steeper Correction on the Horizon?

The Malta-based cryptocurrency exchange analyzed the price action of different altcoins before and after their respective halvings. These data sets helped it come up with the conclusion that interest rises in the run-up to the event and fades away over time.

OKEx said that Bitcoin Cash can serve as an example. This cryptocurrency experienced a bullish impulse that pushed its price up by more than 38% in anticipation of its most recent halving. Following the block rewards reduction event, the selling pressure behind BCH rose substantially triggering a 27% pullback.

Along the same lines, Bitcoin SV skyrocketed by 55% a few days before its halving to hit a high of $227. After the hype around BSV dropped as the event took place, it went through a corrective phase and plummeted by nearly 20%. 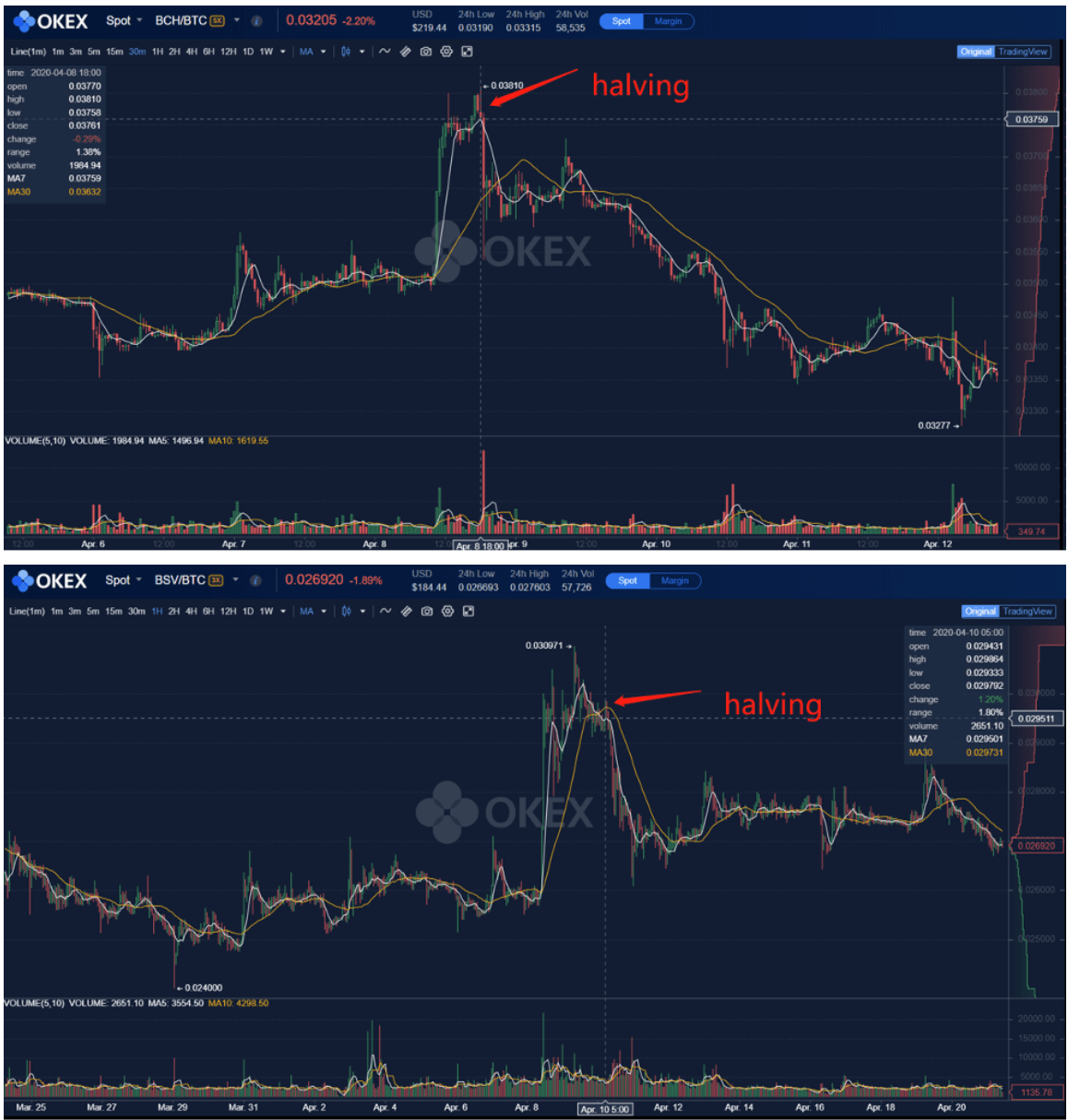 OKEx suggested that instead of upside opportunities, the halving may resemble a “buy the rumor, sell news” scheme. Smart investors usually “long before halving, short on the halving date, and unwind the final position three days after halving,” according to the firm.

Now that Bitcoin’s halving is here, only time will tell whether or not it will lead to a steep decline as it happened in 2016 and most recently with other cryptocurrencies.

For the crypto industry, supporting sanctions is an opportunity to rebrand

Pro traders turn into bears after Ethereum price dropped to $3,200