Earlier in September, Cointelegraph reported that Israeli cybersecurity startup GK8 had raised $4 million to finance its offline cryptocurrency transaction solution. The company developed a cold wallet with “hot wallet functionalities” that is completely shielded from online hackers because it does not require an internet connection.

Apart from creating additional security layers, offline transactions could, in theory, enable complete censorship resistance for cryptocurrencies. Being able to sign, send, validate, receive and record value transfers without the internet might also be the key to ensuring global cryptocurrency adoption.

To this end, there are some startups working on mesh networks (commonly called meshnets). The idea is to create parallel decentralized networks upon which blockchains can truly be censorship-resistant.

The term “censorship resistance” does not appear in Satoshi Nakamoto’s white paper for Bitcoin (BTC). However, it has become one of the sound bites often quoted by proponents of blockchain and cryptocurrency.

Crypto transactions are, by design, immune to payment blocking by third-party actors. Thus, peer-to-peer (P2P) value transfers can take place on blockchains without the need for a central intermediary like a bank or clearing house.

While cryptocurrencies enjoy transactional immutability, other forms of censorship are still available to authorities in different jurisdictions. Government agencies cannot control the actual blockchain protocols themselves, but they can institute policies like Know Your Customer (KYC), Anti-Money Laundering (AML) provisions, or simply block access to crypto-based services.

A government’s ability to censor crypto comes from the fact that blockchain technology still maintains interfaces with systems that are under centralized control. For example, centralized exchanges that accept and process fiat deposits and withdrawals need to have bank accounts.

Governments may not be able to stop people from sending and receiving Bitcoin, but they can mandate exchanges to comply with regulations like KYC and AML. Decentralized file-sharing protocols like BitTorrent provide an example of how centralized authorities can throttle or even block blockchain systems.

As long as crypto transactions require internet connectivity, there remains a single point of failure that can be exploited for censorship purposes. For this reason, crypto proponents have begun testing offline transaction protocols in the last few years using meshnets, satellites and long-range radio technology.

At the start of 2019, analysts at JPMorgan Chase described Bitcoin as only being useful in a dystopian setting. Aside from debating the validity of such a characterization, would Bitcoin or other crypto blockchains still be operable if the planet came under a series of sweeping catastrophic events?

Any damage or government censorship of the global internet architecture could mean that people would not be able to freely send and receive cryptocurrencies. During the March 2019 blackouts in Venezuela, Bitcoin transaction volumes took a significant hit. The absence of electricity meant that Bitcoin — arguably the saving grace for millions in the country — became difficult to transact.

Related: Venezuelan Petro Against US Sanctions: History and Use of the Crypto

Weeks and even months after a natural disaster like a hurricane, power grids in affected areas remain inoperative. More than 11 months after Hurricane Maria, some places in Puerto Rico were still without electricity.

With centralized network infrastructure prone to failure and vulnerable to censorship, the future of electronic value transfers appears tenuous at best. Crypto transfers would not be the only affected service in a global catastrophe, as payments via Mastercard and Visa would also become virtually impossible without access to the internet.

The ability to carry out offline crypto transactions also creates another avenue for broader digital currency adoption. Areas with little or no internet coverage can have access to decentralized payment channels.

“In many parts of the rural and developing world internet connectivity is both expensive and intermittent. More solutions tailored to these situations would certainly facilitate the use of cryptocurrencies in places where it is needed. Bitcoin transactions can be made over alternative low-bandwidth transport layers like mesh radios and SMS.”

Sending Bitcoin over satellites and meshnets

There are already a few projects focused on creating alternatives to centralized ISP networks. These projects are examining the deployment of mesh networks and long-range radios as replacements for internet connectivity.

Apart from creating a parallel P2P infrastructure for crypto transactions, these networks can also create channels for truly decentralized communication that is not under the control of any government. 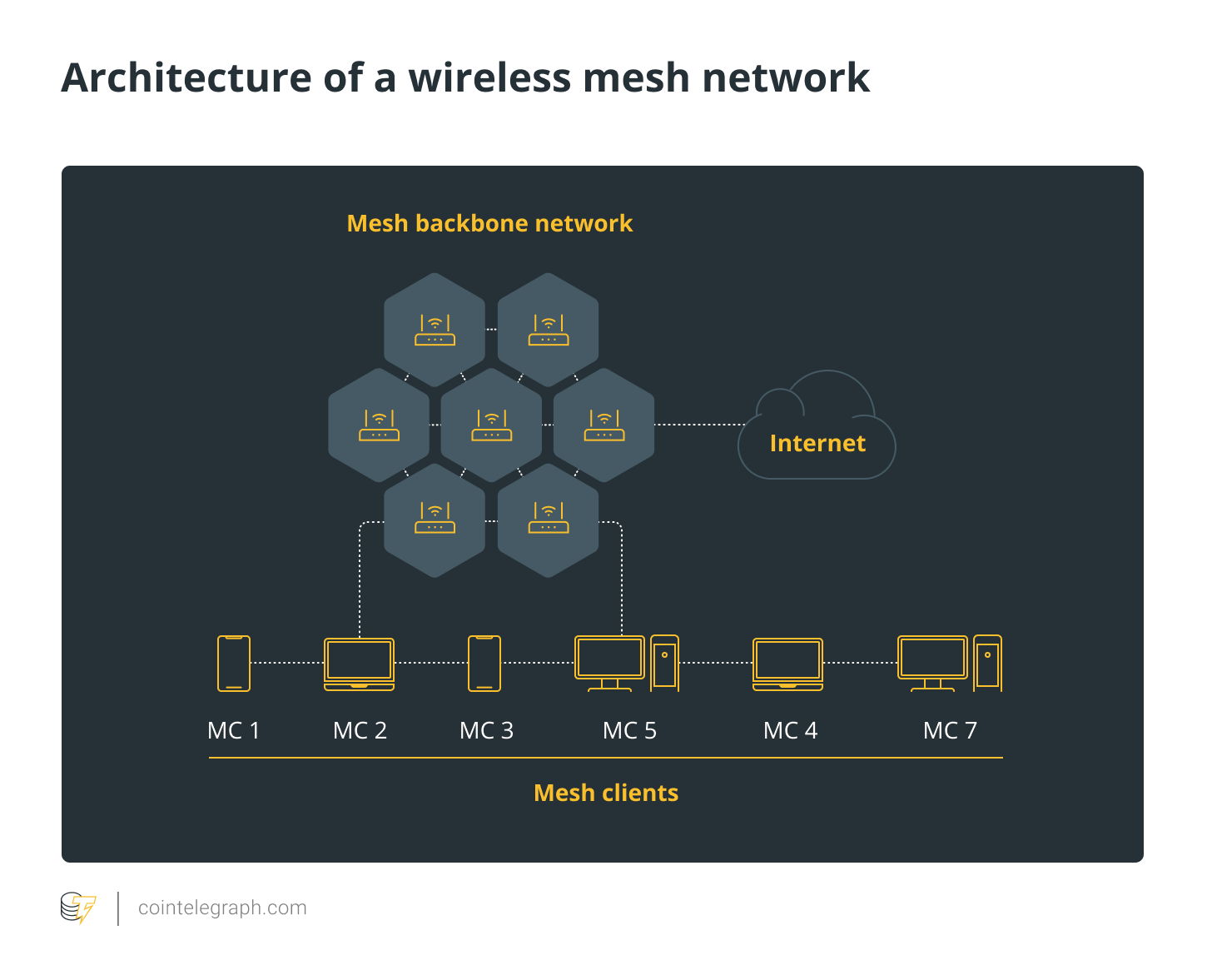 Mesh networks have a special topology that allows all necessary infrastructure nodes to be connected in a nonhierarchical manner. This arrangement differs from the centralized internet architecture, which sees servers being responsible for relaying information to and from connected nodes.

Since there is no central dependency within a mesh network, nodes can self-configure. Thus, if a few nodes within the network go out of commission, others can dynamically reroute and reorganize themselves to allow for uninterrupted information relay.

The nonhierarchical structure of a mesh network bears a distinct resemblance to early iterations of the internet. This type of arrangement is also similar to the Bitcoin blockchain with its flat network topology.

With the emerging advancements in wireless technology, mesh networks no longer need to be wired. Instead, network nodes communicate directly with one another if within range. For long-range information transfer, nodes act as relays to send data streams over the distance.

For example, blockchain company Blockstream already has satellite infrastructure that is providing internet-free access to the Bitcoin network across five continents. With a simple satellite dish, users can run a full node to facilitate Bitcoin payments.

Using SMS bridges or meshnets, users can broadcast these transactions throughout the network, all without needing internet connectivity. Startups like goTenna that enable SMS capability in the absence of cellular connectivity have integrated with crypto wallets to allow offline transactions using text messages.

Custody remains one of the major pain-points for the cryptocurrency industry. Solutions that attempt to limit the necessity for internet connectivity still require online access to broadcast the transaction over the network. Rotem Finkelman, a marketing communications manager at GK8, discussed the need for truly offline crypto transaction solutions in an email to Cointelegraph:

“The reason someone pursues ‘offline’ crypto transactions is to prevent potential hacks and stealing of private key, but the solution that is claiming to be ‘air-gapped,’ Bluetooth, radiofrequency — are all hackable by the fact that they need to be connected to the internet in some point (even for a millisecond) to create a valid transaction. In that case, they still have attack vectors and if the attack vectors still exist in the solution, then the purpose of ‘offline’ crypto transactions isn’t achieving its goal.”

With improvements in mesh networks and long-range radio technology, cryptocurrency exchange and access to decentralized blockchain consensus networks will be possible without any final uplink to an internet connection.

Newest Crypto - November 29, 2021
0
CoinDCX, India’s first crypto unicorn, plans to go for a listing, once regulations permit it do so, co-founder Neeraj Khandelwal said in an...

China Was Questioning Tesla About Quality Problems. Then Bitcoin Happened