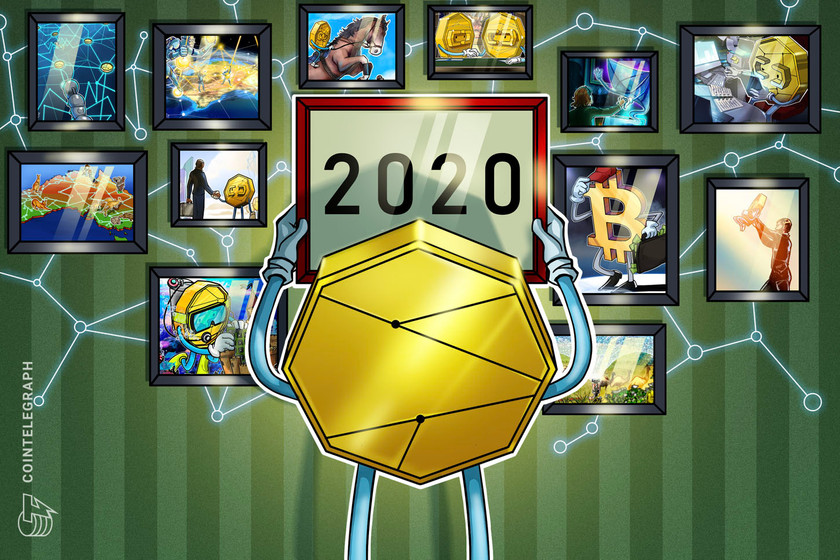 For a country of 25 million people, Australia punches well above its weight both economically and in the world of blockchain. Australians have long been enthusiastic adopters of new technology, from cell phones to smart homes, and it’s little surprise they’ve embraced crypto too.

“There’s just a huge percentage of people per-capita compared to most countries that are interested in crypto and blockchain,” he explained.

The past year has seen the crypto ecosystem flourish despite the pandemic. The Federal Government released a five-year plan called the National Blockchain Roadmap, banks and the finance sector have warmed to the technology, and local projects were instrumental in driving the mid-year DeFi boom.

A raft of Australian DeFi projects came to global prominence in 2020, including Synthetix — which began life as stablecoin project Havven in the country’s largest ICO in 2018, before morphing into a decentralized version of BitMEX using synthetic assets.

Synthetix founder Kain Warwick is also known as the “father of modern agriculture” for popularizing the concept of yield farming that sparked the 2020 DeFi boom.

“I think Synthetix is probably the most notable one just because they’re doing some pretty amazing work. All this stuff is very cutting edge tech.”

Based in Brisbane, Queensland, Rocket Pool is a decentralized Eth2 staking service that will enable users without the minimum 32 ETH, or the desire to run their own validator, the ability to stake. Ren is a decentralized way to create tokenized Bitcoin and other coins that can be used in DeFi, while mSTABLE allows users to swap USD stablecoins with zero slippage and earn high yields. Thorchain (RUNE) meanwhile is a forthcoming, cross chain version of Uniswap. Henrik Andersson, the Chief Investment Officer from Melbourne based fund Apollo Capital said:

“Many of these projects are among the top in the world.”

Rudgendyke said that mostly favorable regulations are one reason local projects are able to thrive as it enables them to, “build in a way which is going to satisfy regulatory requirements but also not stifle what they’re trying to do,” he said.

“I think we’re kind of heading in the right direction by fostering that innovation rather than taking the heavy handed approach like the (U.S.) SEC is.”

To take a couple of examples, crypto friendly capital raising platform Stax launched the first IPO in Australia with permission to accept crypto in the form of USDT for its client West Coast Aquaculture Group in October. On completion in November, around 89% of the $5M raised had been contributed in Tether.

And at the start of the year a judge in New South Wales allowed a plaintiff to put up cryptocurrency as a security against costs being awarded against them, with the judge calling crypto a “recognised form of investment” — albeit a highly volatile one.

Not a soft touch

But it’s not all good news — Australian exchanges, including Coinspot and Coinjar, were forced by regulators to delist privacy coins in August, including Monero, Bytecoin and ZCash. Regulators also don’t seem keen on ICOs, with many falling foul of current laws that consider them Managed Investment Schemes requiring licensing.

In February, West Australian-based Power Ledger CEO Dr Jemma Green told the Federal Parliament’s Select Committee on Financial Technology and Regulatory Technology hearing that the tax treatment of ICOs was not “fit for purpose” and was part of the reason that of the $26 billion raised through ICOs to date, only 0.79% was in Australia.

“In Australia, the proceeds are being taxed as income and as a result of this, Australia is not an attractive proposition to undertake one of these ICOs.”

One area in which Australia lags is in the use of crypto for day-to-day payments. A Reserve Bank of Australia study in March found that while 80% of Australians were aware of cryptocurrencies,less than 1% of consumers have used crypto to make a consumer payment.

“India and Vietnam already have higher grassroots-level adoption than Australia, as they rank higher on our index at 11th and 10th respectively.”

The adoption of crypto for payments has been a little hamstrung in Australia because the country has one of the most-advanced electronic payments systems in the world. The New Payments Platform, also known as Pay ID, enables Australians to send or receive money instantly 24/7 using only an email address or phone number.

Funnily enough, Ripple launched a very similar crypto-based service this year, called ‘PayID’ and promptly got sued by the New Payments Platform in Federal Court for copyright violation. In November, Ripple changed the name to ‘PayString’.

Pay ID has also been cited by the RBA as a key reason the country doesn’t require a central bank digital currency, or CBDC — despite the bank actively researching one. In October, the RBA’s head of payments policy Tony Richards said not to expect a CBDC any time soon:

“Australian households and businesses are well served by a modern, efficient and resilient payments system that has undergone significant innovation in recent years, including the introduction of the New Payments Platform, which is a real-time, 24/7 and data-rich electronic payments system.”

Saunders said it was a short-sighted decision. “It’s kind of disappointing to hear the RBA say that they don’t see a use case for central bank digital currencies, when every other central bank on the planet is talking about how they’re the future and trying to roll them out,” he said.

Despite its reticence, the RBA has since partnered with the two of the country’s four major banks (Commonwealth and National), along with Ethereum developer Consensys and the financial services company Perpetual to explore a wholesale central bank digital currency using an Ethereum-based digital ledger.

In another welcome sign banks are looking more favorably at the industry, three of the ‘Big Four’ banks formed a company in September called Lygon to digitize bank guarantees using blockchain technology. The aim is to cut the processing time from weeks down to a single day — mainly for commercial lease guarantees — using IBM’s Hyperledger technology.

Government on board with blockchain

The Government announced $4.95 million in this year’s budget in support for “two blockchain pilots directed at reducing business compliance costs”.

But probably of more significance was the release of the National Blockchain Roadmap at the start of the year, which was developed by the Federal Government’s Department of Industry and Science in consultation with industry group Blockchain Australia. It sets out 12 key recommendations over the next five years and identified the three most promising use cases for the technology:

Recording credentials and qualifications for the education sector

Know You Customer identity verification for the finance industry

These three areas are also the focus of Blockchain Australia’s proposed $60 million Cooperative Research Centre. The CRC requires a $30 million contribution from industry which would be matched by the government, but so far only a handful of organizations are on board.

While the three use cases are being addressed by various initiatives, supply chain tracking could offer the most immediate benefits with an estimated $1.7 billion of lower quality food and produce passed off as “Australian” overseas (mostly in China). A new public body called the APAC Provenance Council, was set up mid year by local blockchain businesses in concert with VeChain, Mastercard and Alipay.

The aim is to offer guidance to exporters about supply chain tracking and to offer them trade financing. The organization has an innovative “milestone” based payments system that can provide partial payments when certain conditions are met along the journey — such as when a shipment leaves customs — as verified using blockchain.

ASX DLT is not OK

One thing that certainly didn’t happen in 2020, and won’t be happening any time soon, is the much hyped transformation of the Australian Securities Exchange’s CHESS share registration system — which was expected to be overhauled using DLT technology. Saunders explained:

“The ASX has just pushed back rolling out blockchain for stock trading until 2023, which is the third time they’ve pushed it back,” explained Saunders.

The ASX blamed the latest delays on surging volumes amid the March market crash requiring it to triple the system’s capacity — although part of the reason for the delay is likely the concerns expressed by some key stakeholders.

Australia was already well served by crypto exchanges, but the majors have been looking to expand market share here in 2020. Binance, Gemini and Crypto.com all extended fiat services to Australians this year, with Crypto.com recently announcing it had bought an Australian company in order to use its Australian Financial Service License and issue a Visa credit card.

Kraken Australia opened mid-year, after taking over local exchange Bit Trade. The UK based money app Revolut — which is one of the largest brokerage firms in Europe with a million customers — also extended crypto trading services to tens of thousands of Aussies.

After a year of being confined to quarters during the pandemic — all of the state borders slammed shut and Victorians endured a severe four month lockdown — the crypto community is looking forward to a return to normality in 2021. Saunders said he’d been confined to Tasmania for most of the year and was eager to return to in-person events to see how the landscape had changed:

“Now we’re in a bull market I can’t wait to actually get out there and amongst the community.”