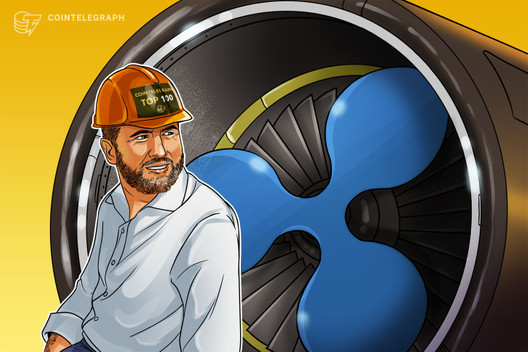 Regarding Ripple’s relationship with XRP, he said, “In the XRP community, Ripple is the largest owner, and the point I have made is we’re the most interested party in the success of the XRP ecosystem.” He added that Ripple would never dump its XRP holdings into the market, as doing so is not in the firm’s best interests.

Since taking the helm of the payments-focused fintech company in 2015, Garlinghouse has overseen its rapid expansion into new markets, the launch of new subsidiaries and affiliates, and defended Ripple in public controversies.

Yahoo and a loathing for peanut butter

Before joining Ripple in 2015, Garlinghouse held a number of prominent positions in the tech and fintech space. After receiving his bachelor’s degree from the University of Kansas and a master’s in business administration from Harvard Business School, Garlinghouse held positions at Yahoo, AOL and file-sharing site Hightail.

At Yahoo, Garlinghouse occupied several senior management positions, including the role of senior vice president, and in 2006, he authored the “Peanut Butter Manifesto,” which was subsequently published in the Wall Street Journal.

In the manifesto, Garlinghouse called for a radical reorganization of Yahoo’s structure, likening small investments across myriad projects and departments to a layer of peanut butter spread thinly across a piece of bread. Garglinghouse wrote, “I hate peanut butter. We all should.”

After criticizing the lack of clarity and decisiveness at Yahoo, he called for a shakeup that would streamline and decentralize various aspects of the firm.

In 2012, Yahoo CEO Marissa Mayer gave a nod to the manifesto with the “PB&J program,” which sought to eliminate needless bureaucracy within the firm, such as mandatory staff orientation at the gym.

Garlinghouse then moved to AOL, which he reportedly left because — like Yahoo — the firm spread its resources too thin across multiple projects. At Hightail, he served as CEO but stepped down in 2014, reportedly due to differences in opinion with the board of directors regarding several buyout offers that the company had received.

His distaste for organizational cruft and preference for laser-focused mission would transfer and serve him well at Ripple.

In November 2016, Chris Larsen, then CEO of Ripple, stepped down from the role to be replaced by Garlinghouse. At the time, the new CEO stated that Ripple could stake its place in the world by making financial services more accessible worldwide:

“I think there are a lot of interesting companies, but there aren’t that many companies that can take their little dent in the universe. […] I think what Ripple is doing is not just, hey, how do we enable banks — it’s a broader effort in how can you enable an Internet of Things and connected devices that are economic actors to pass a couple pennies. Today we fundamentally can’t do that in an efficient way unless I’m handing you 2 pennies. Whether you talk about Africa, or underbanked communities, these are all examples where Ripple can change the way society works.”

Ripple entered into a number of important partnerships with major financial service firms in 2019 alone. In June, Ripple announced that it signed a strategic partnership with money transmission network MoneyGram, wherein MoneyGram would be able to draw up to $50 million dollars from Ripple in exchange for equity.

MoneyGram then said that it would use Ripple’s xRapid product, which allows money to be sent in one currency and instantly settled in another, using XRP tokens as a vehicle for quicker cross-border transfers.

In October, the third-largest financial services technology firm in the world, Finastra, partnered with Ripple in order to give its customers — which include 48 of the top 50 banks worldwide — access to the RippleNet blockchain network.

While Ripple has expanded rapidly under Garlinghouse’s leadership, the firm has also become a target for some in the cryptocurrency community, who claim that it is not sufficiently decentralized and misrepresents its relationship with the XRP token.

In October 2019, some commentators in the cryptocurrency space pointed out an apparent contradiction regarding some of Garlinghouse’s comments on Ripple’s relationship to the XRP token. The CEO had said:

“One really important distinction is, the XRP ledger existed before Ripple the company. Certainly we are an interested party in the success of the XRP ledger, for sure — we own a lot of XRP. But it’s a little bit like saying, Exxon owns a lot of oil. That doesn’t make oil a security.”

However, Coinmetrics.io co-founder and Castle Island Ventures partner Nic Carter said that this view contradicted claims from a fall 2018 article by attorney Preston Byrne, which Carter considers the authoritative source regarding the nature of XRP.

Byrne argued that XRP was created after Ripple formed in 2012, stating that:

“No ‘Official Ledger’ containing XRP or any transactions on the ledger which is today used as ‘XRP’ existed before Ripple Labs, Inc. (initially named Newcoin Inc.) was incorporated on 19 September 2012.”

Garlinghouse, for his part, said that the firm’s transparency had “opened us up for attack.” In an October interview with Morgan Creek Digital Assets co-founder Anthony Pompliano, the CEO dismissed allegations that Ripple would dump its XRP holdings onto the market in order to drop the price.

Garlinghouse repeated the refrain that Ripple is the most interested party in the success of the token, stating that XRP is the “only example of crypto and blockchain being used at scale, period.”

Despite criticisms that Ripple controls and could manipulate the XRP price, Garlinghouse has positioned the firm as the major token holder going forward. Indeed, he noted that Ripple would not respond well to other large investors owning significant proportions of the XRP supply. In an interview on CNN last week, the CEO said:

“There are times when we work with institutional investors or might say, ‘Hey, we want to buy $10 million of XRP,’ and we would have lock-ups to prevent them from dumping on the market.”

Garlinghouse did note that the proposed mechanism was strictly hypothetical and would be based on existing volumes on the market.

Bullish on Bitcoin and XRP, bearish on bullshit

In the summer of 2019, Garlinghouse — like many in the cryptocurrency space — likened Bitcoin to a digital version of gold insofar as it can be used as a store of value in uncertain economic climates.

He further stated that Bitcoin and XRP are not competing digital currencies, but that XRP was a “bridge currency” that allows efficient fiat-to-fiat transfers. While noting that it was cheaper and faster to transact with XRP, Garlinghouse said that he did not think that meant Bitcoin would fail, adding:

“I own Bitcoin, I’m long on Bitcoin. I think Bitcoin is a store of value and people hold it.”

While the exec remains positive regarding Bitcoin and XRP, he has derided other projects within the space in 2019, stating that there is “a lot of bullshit in blockchain and crypto market” that makes it difficult to discern truly good projects.

In November of last year, Garlinghouse predicted that the value of 99% of digital assets would eventually sink to zero. During an interview with Bloomberg, he said that there are currently too many cryptocurrency projects and added that only 1% will likely remain in the market.

Indeed, according to data from Coin360, there are currently thousands of different digital assets in the world, the number of which — per Garlinghouse — is growing because of the hype surrounding the cryptocurrency space. He further argued that very few of these tokens can actually meet real customer needs, adding:

“Anytime there is a new market, there are a lot of people that run into that market and try to show that they can solve a problem, they can deliver a customer need.”

Regarding Facebook’s proposed Libra stablecoin, Garlinghouse said that he does not think regulators will give the project the green light anytime in the near future, stating in October, “I would bet that Libra… let’s say, by the end of 2022, I think Libra will not have launched.”

Garlinghouse further hinted that Facebook’s reputation with regulators may have given lawmakers a poor impression of the project, saying, “I think maybe it would have been better received if Facebook had not been the point of the arrow.”

As Ripple moves into the future, Garlinghouse appears to remain confident that blockchain technology and firms like Ripple will change the payments landscape to make finance more accessible, faster and cheaper for users.

He also noted that these groundbreaking technologies will be considered a threat by many in the traditional finance space, especially by firms that rely on the trust-building intermediary elements of the payment infrastructure to make profits.

At the World Economic Forum in Davos, Garlinghouse said that Citibank makes $8 billion a year in profits from various gatekeeping activities within financial transactions, adding:

Brad Garlinghouse is ranked #9 in the first-ever Cointelegraph Top 100 in crypto and blockchain.

DeFiance Capital’s Arthur Cheong Is Raising Money for a New Fund After Getting Burned by 3AC: Sources

Newest Crypto - September 30, 2022
0
According to a complaint filed in the Southern District of Florida on Friday, Todd is accused of using various corporate entities – including...