Bitcoin’s correction over the past few days has made investors fear the worst is yet to come for the market. Indeed, after a multi-week surge that brought the asset from $6,400 to $10,500, a 10% sell-off in a single day was shocking, leaving many wondering if a bear trend is on the verge of forming.

While there is some validity to these fears — Bitcoin recently broke below an ascending channel it was trading in for weeks on end — three technical factors suggest that bulls remain in control, despite the correction we saw in the middle of last week.

The first factor is the Relative Strength Index (RSI), which measures momentum through the magnitude of price action. The indicator’s one-day reading for Bitcoin just bounced off the 50 baseline for the first time in this bull trend, suggesting buyers still have control.

$BTC – Bulls still have control with the daily RSI above 50… #bitcoin pic.twitter.com/5VLwYUQiwL

Chonis isn’t the only one who has drawn importance to Bitcoin’s RSI reading of 50. Previously, trader Financial Survivalism said that the metric flipping 50 into support and then holding it was a positive sign for this market.

This has been underscored by the fact that interest in Bitcoin and related topics is rapidly rising. With retail interest being the catalyst that sent the cryptocurrency market so much higher in 2017, the growth in mom & pop investors entering the industry once again has been seen by many as a positive sign.

According to Google Trends the search term “halving” or “halvening” climbed dramatically from April to June 2019 up to the 14k price peak.

It started to climb again since Dec 2019 when there was a higher low.

My conclusion: #Bitcoin price will be higher in May 2020. pic.twitter.com/y2Q5o1mxbS

The existence of swelling levels of interest in Bitcoin has been underscored by the Chaikin Money Flow indicator, which is still holding above the zero baseline, suggesting money is flowing into the market.

$BTC – CMF remains above zero line in a falling channel… there is still money flowing into #bitcoin , although notably less than a few weeks ago… pic.twitter.com/7Lr0i97Ws5

Trader CryptoDude just the other day posted the below chart, showing a silver lining with Bitcoin’s recent price action: BTC has printed three long daily wicks into the $9,300 to $9,500 region, though failed to close a daily candle under $9,500.

This suggests that there remains a large amount of buying demand, adding to the potential for a greater recovery (potentially above $10,000) in the coming days. 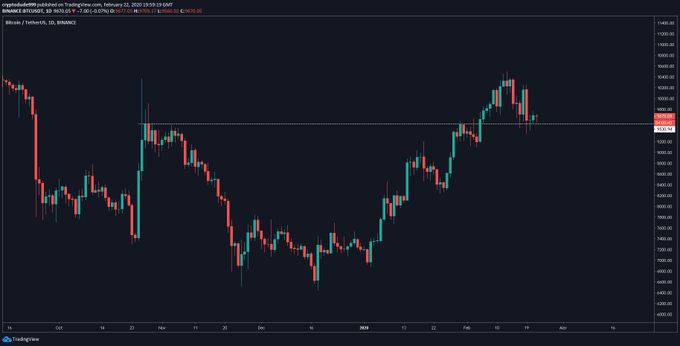 Indeed, a number of analysts have said that $9,500 is “major support” for Bitcoin that must hold into the future. Crypto Bullet, for instance, laid out the following reasons as to why $9,500 is crucial for bulls: