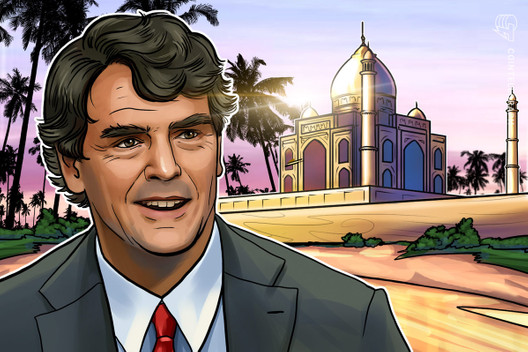 Billionaire investor and the winner of thousands of Bitcoins (BTC) in the Federal Bureau of Investigation’s 2014 Silk Road auctions, Tim Draper, has set his sights on India’s nascent cryptocurrency industry.

On March 22, the venture capitalist tweeted that the Supreme Court’s recent reversal of the Reserve Bank of India’s (RBI) ban on banks providing financial services to crypto companies will drive a “renaissance” for the country’s cryptocurrency sector.

In a March 21 interview with Inc42, Draper stated that he “met several Bitcoin and crypto startups” during a recent trip to India, adding that he “hope[s] to be able to fund a number of them.”

The VC emphasized the crucial timing of the Supreme Court’s decision, predicting that the benefits of cryptocurrencies will be highlighted by the deterioration of the global financial system.

“The Supreme Court of India and the Indian government have shown that the best ideas ultimately prevail, and just in time, because the benefits of Bitcoin and crypto over current systems will become apparent during this crisis.”

Long term, Draper expects that the current crisis “will allow people to recognize that bitcoin is simply a better way to hold value and spend money than through our current banking system.”

Draper is not the only one looking to invest in India’s crypto sector, with Binance and Wazirx announcing their $50 million “Blockchain for India” fund on March 16. Coindcx also pledged $1.3 million in funding towards initiatives to raise awareness and adoption of crypto in India on March 12.

Crypto exchanges, Kraken and KuCoin, have both issued statements announcing a desire to enter the Indian market.

Within one day of the Supreme Court’s ruling, both Binance and Okex had resumed Indian operations through their respective local partners, Wazirx and Coindcx.

India’s crypto industry is not out of the woods yet

Despite the widespread excitement for crypto in India, the sector still faces pending regulatory challenges.

In addition to a probable appeal from RBI regarding the Supreme Court’s decision, India’s parliament is yet to rule on the “Banning of Cryptocurrency and Regulation of Official Digital Currency Bill” from 2019.