Sunday, Sept. 22 — crypto markets are seeing a wave of red amid the approaching launch of Bakkt’s physically delivered Bitcoin (BTC) futures on Monday.

Bitcoin is the only cryptocurrency out of the top 20 that is attempting to gain momentum today, while the rest are seeing major losses, with some dropping over 7% in the 24 hours prior to press time.

Bitcoin has continued to hover around the $10,000 threshold throughout the day. At press time, Bitcoin is up around 0.6% and is trading at $10,014. Still down nearly 3% over the past 7 days, Bitcoin has seen its dominance on the market edging up almost 1% on the day to account for 68.3% at press time.

Ether (ETH), the second cryptocurrency by market cap, is down 4.1% to trade at $207 at press time. Over the past 7 days, the top altcoin is still up 9.5%, following a major bullish move earlier this week.

XRP, the third-largest cryptocurrency by market cap, dropped nearly 6% over the past 24 hours and is trading at $0.272 at press time. However, the coin is still up more than 5% over the past 7 days.

Tron (TRX), the 13th biggest cryptocurrency by market cap, is seeing the largest losses on, down more than 9%. Earlier today, Tron’s founder Justin Sun announced a new plan for Tron’s proof-of-stake mechanism that will focus on the ways of distributing staking revenues and greater engagement of the community.

Total market capitalization saw another drop today, down from $266 billion to $263 billion at press time.

Meanwhile, the current state of the market could be the start of a new bull market, according to Bitcoin investor and entrepreneur Willy Woo. In a tweet on Sept. 21, the trader cited on-chain metrics as potential evidence for “closing up the opening act of the bull market.” 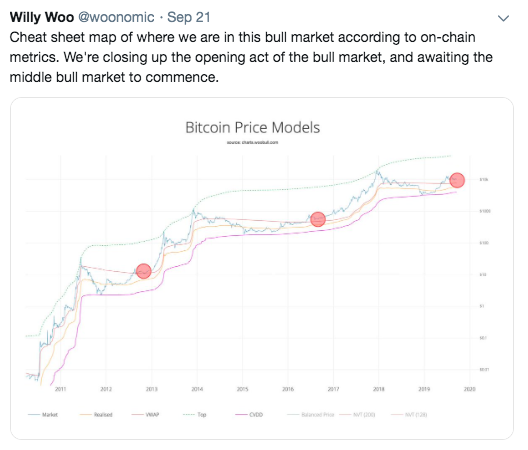 As reported by Fortune, the new wave of red on the market comes just some hours before the launch of Bakkt’s physically delivered Bitcoin futures, one of the most anticipated events in the industry so far.

Meanwhile, the crypto community’s views on whether Bakkt’s physical BTC futures launch will be successful are divided, with 50% of people expecting the platform to flop, according to a public Twitter poll launched by crypto enthusiast Alex Krüger on Sept. 21. At press time, the poll has amassed 2,355 votes.

In a tweet on Sunday, major crypto believer John McAfee supported the bullish trend over Bakkt, claiming that the launch of physical futures on the exchange will increase the level of trust by institutional investors. McAfee added that the event could jump-start crypto adoption.

South Korea Aims to Put Trade Finance on the Blockchain by...