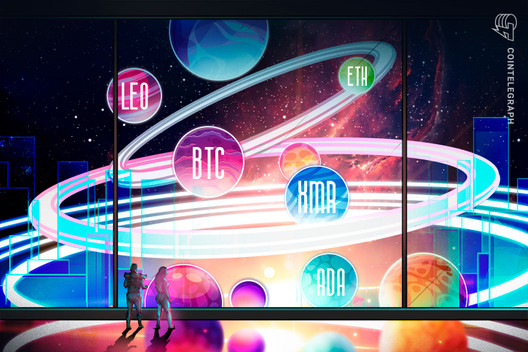 A few major cryptocurrencies are attracting buyers on dips, which suggests that investor sentiment remains bullish.

Only about 3.5 million Bitcoin (BTC) are available for trading, according to new data from blockchain analytics firm Chainalysis. The remaining 11.4 million are held as long-term investment and 3.7 million are believed to be lost.

This suggests that if institutional investors enter the crypto space and invest for the long-term, the tradeable supply of the top-ranked cryptocurrency on CoinMarketCap is likely to shrink further and possibly boost the price of BTC.

In a recent interview with Cointelegraph Markets, Max Keiser, host of the Keiser Report, said that Paul Tudor Jones is likely to become “the biggest HODL’er of Bitcoin within 2 years.”

In other news, Ray Dalio’s Bridgewater Associates, the largest hedge fund in the world, said that equity investors might be staring at a possible “lost decade” as globalization “has already peaked.”

If this happens, institutional investors are likely to gradually enter the crypto space in search of higher returns. All these fundamentals point to higher prices in the future but how does the short-term picture look? Let’s analyze the charts.

Bitcoin (BTC) dipped below $9,078.96 on June 15 but the bears could not capitalize on this weakness as bulls provided support at $8,910.04. This suggests strong demand at lower levels. However, the rebound has not been able to sustain above the 10-day exponential moving average ($9,425), suggesting selling at higher levels. 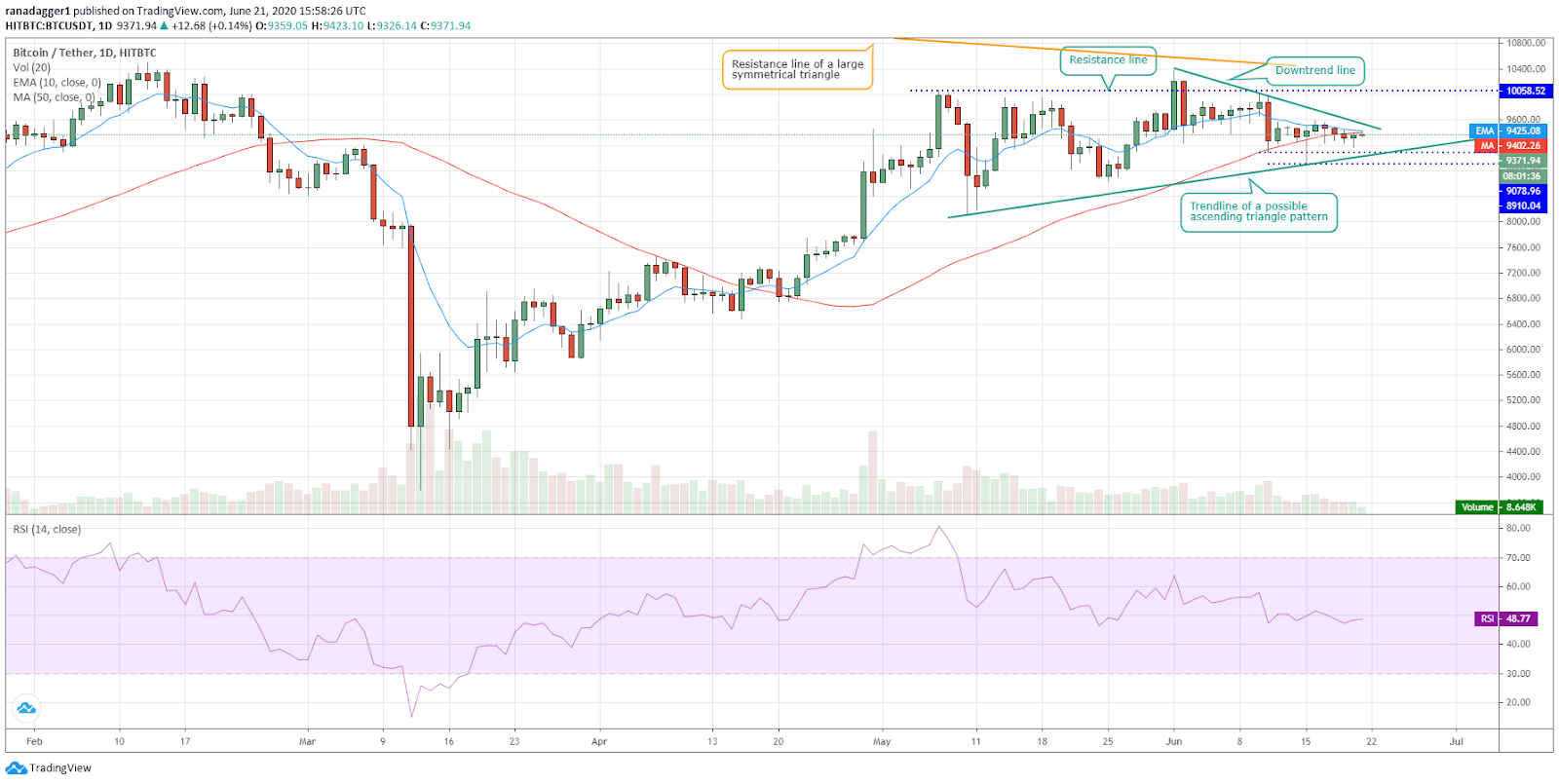 The 50-day simple moving average ($9,402) is gradually flattening out and the relative strength index has been trading close to the midpoint. This suggests a balance between supply and demand, which could result in a range-bound action for a few more days.

This view will be invalidated if the BTC/USD pair turns down from the current levels and breaks below the $9,078.86–$8,910.04 support zone. If that happens, a short-term down move is possible. 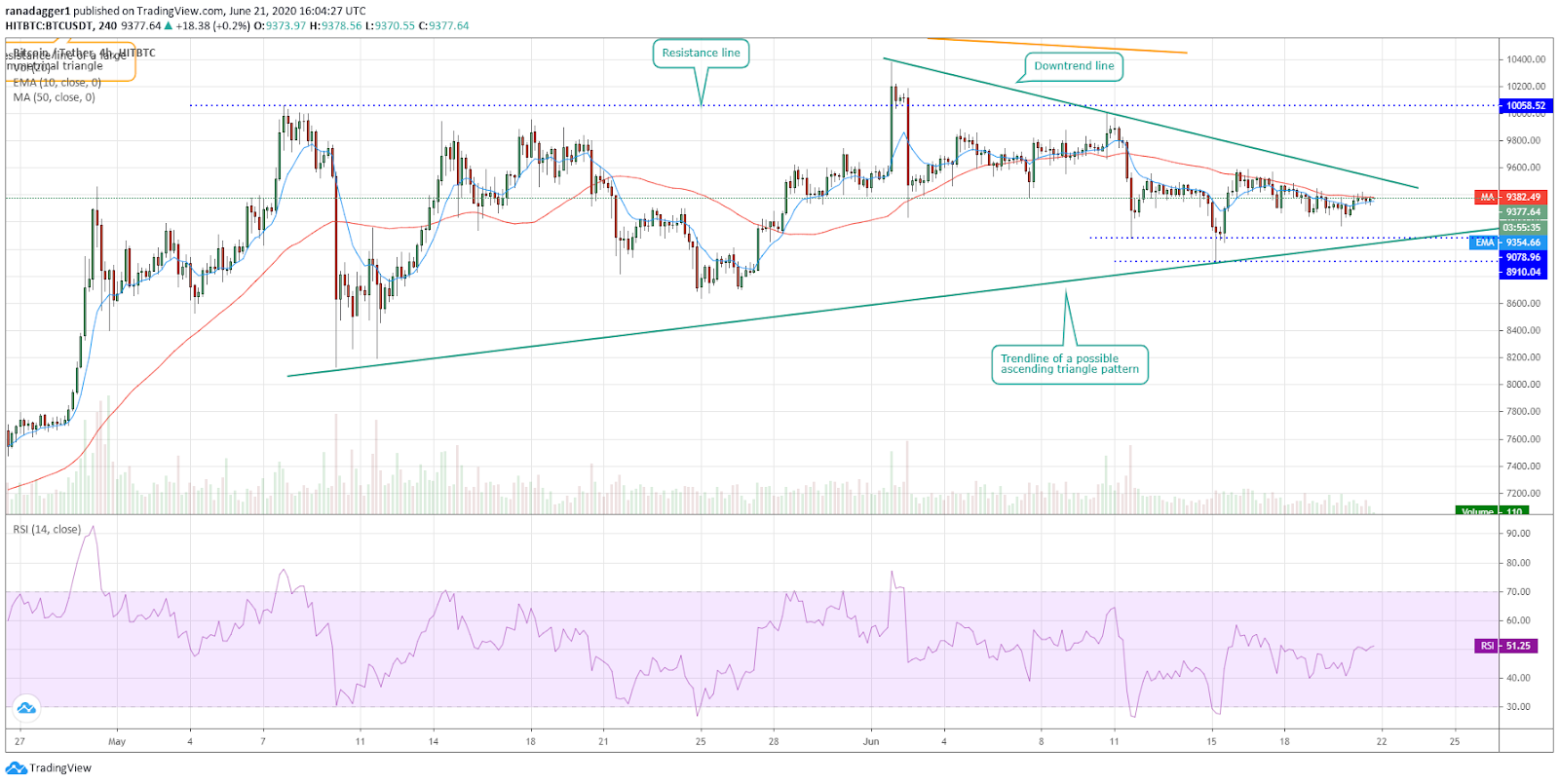 The first sign of strength will be a breakout of the downtrend line. If the price sustains above $9,600, the bulls who have been waiting on the sidelines are likely to jump in. Therefore, a quick rally to $10,000 is possible.

The bears are unlikely to allow the bulls to have it easy at the $10,000 levels. Hence, a minor correction or consolidation can be expected at those levels.

This view will be invalidated if the pair slides below the trendline of the triangle. This could retest the recent low of $8,910.04. If this support also cracks, the bulls who have been holding on for the past few weeks are likely to liquidate their positions.

Volatility is likely to remain high for the next few days as both bulls and bears attempt to assert their supremacy. Hence, trading with a smaller position size can help reduce the risk. 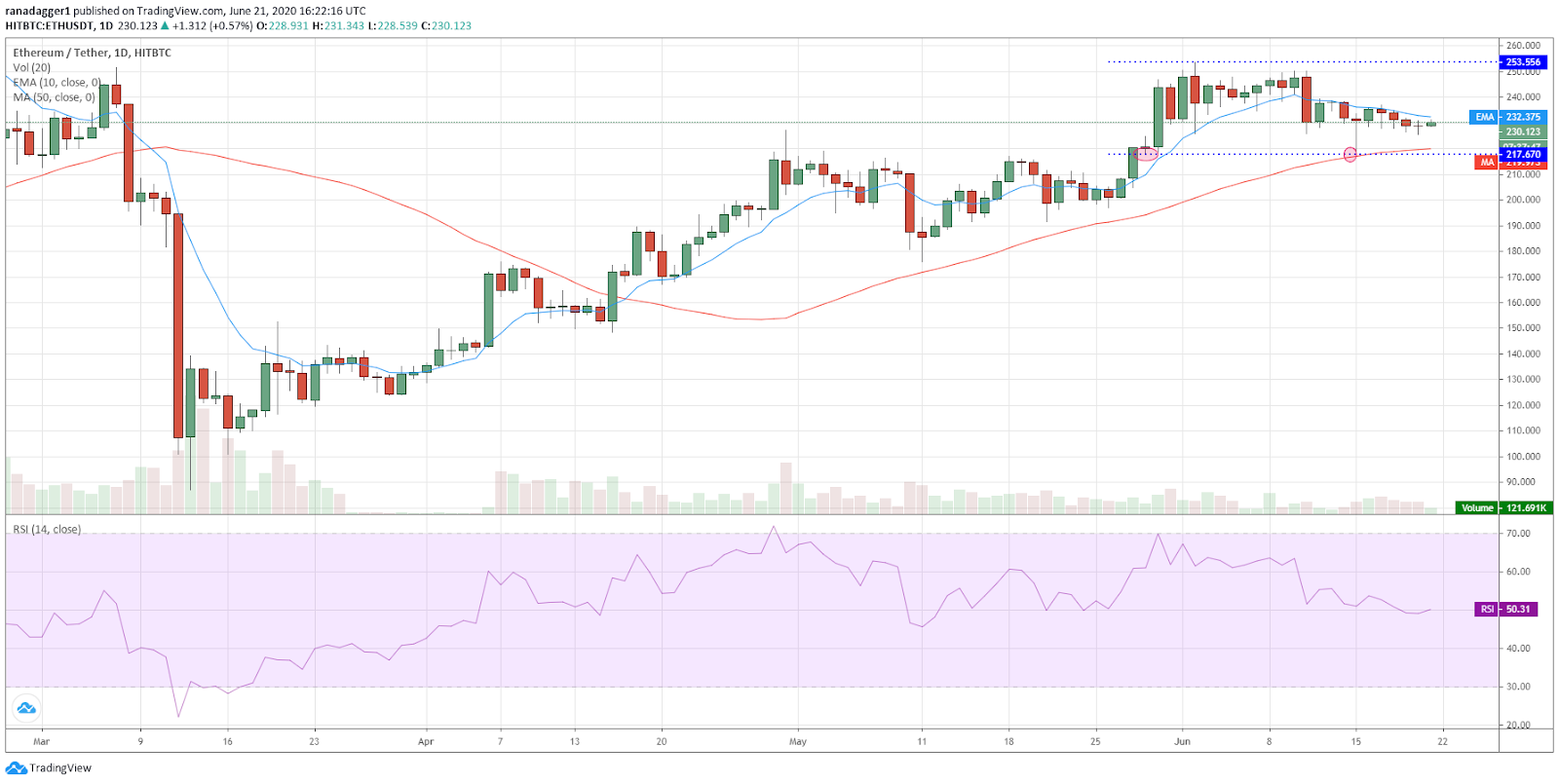 This balance will shift in favor of the bulls if the second-ranked cryptocurrency on CoinMarketCap rises above the 10-day EMA ($232). Above this resistance, a rally to $253.556 is likely.

If the bulls can scale the price above $253.556, the uptrend is likely to resume. However, if the price turns down from this resistance, the range-bound action is likely to extend for a few more days.

Conversely, if the biggest altcoin continues lower from the current levels, it can drop to $217.67. The bulls are likely to defend this level aggressively. A strong bounce off this level will indicate that the bulls are keen to accumulate at lower levels. A break below $217.67 will tilt the advantage in favor of the bears. 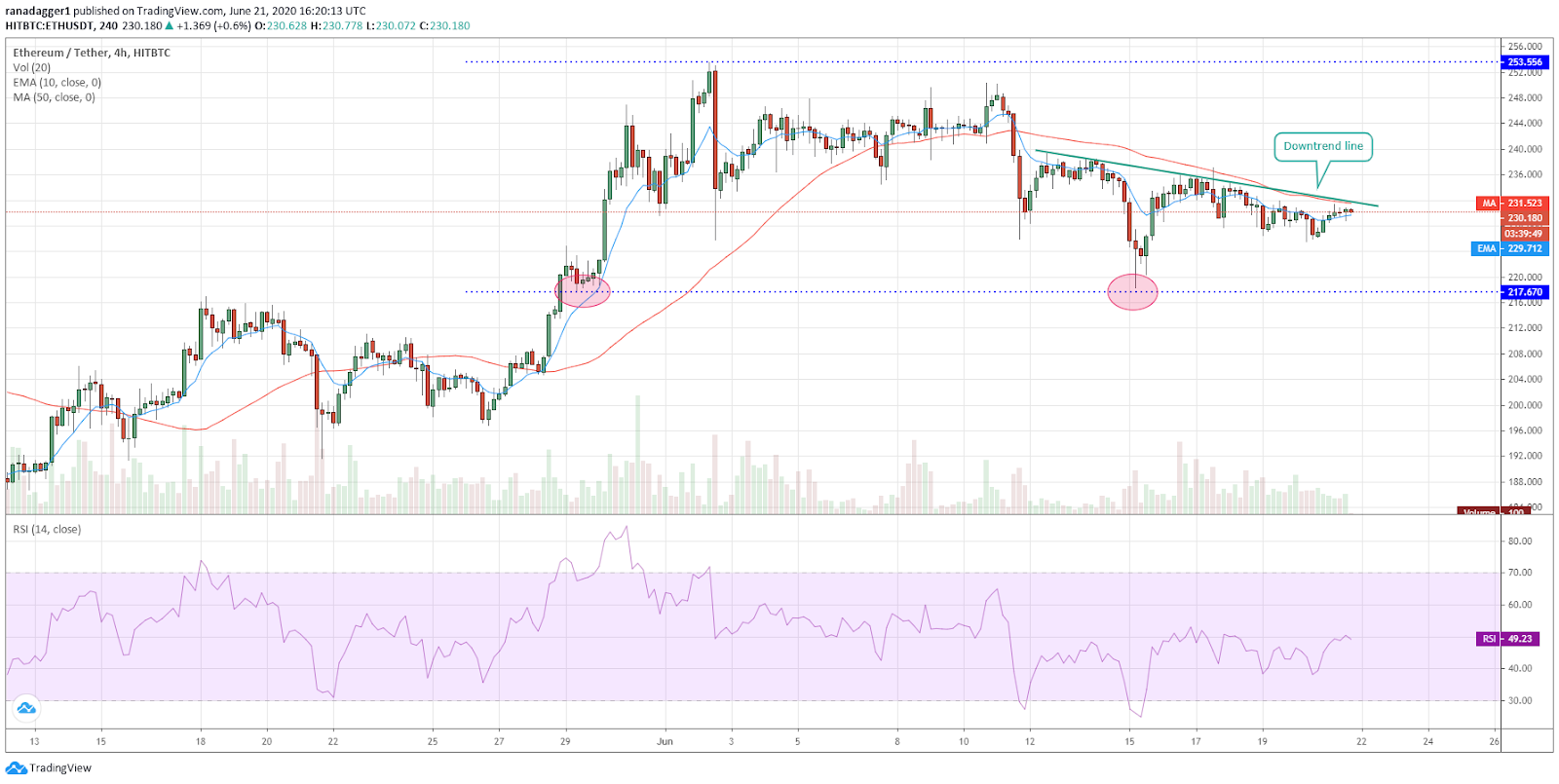 The four-hour chart shows that the ETH/USD pair has rebounded sharply from $217.67 at twice before (marked as ellipse on the chart). This suggests that the bulls are accumulating on dips.

Therefore, if the price again dips to $217.67, the bulls are likely to buy again. A strong bounce off this support might offer an opportunity to the traders.

On the upside, a breakout of the downtrend line will be the first sign of strength. Above this resistance, a rally to $240 and then to $253.556 is likely. This bullish view will be invalidated if the bears sink the pair below $217.67.

The dip in Cardano (ADA) to $0.069488 was purchased aggressively on June 15. This is a positive sign as it shows that several traders expect the trend to continue, hence, they are buying the dips. 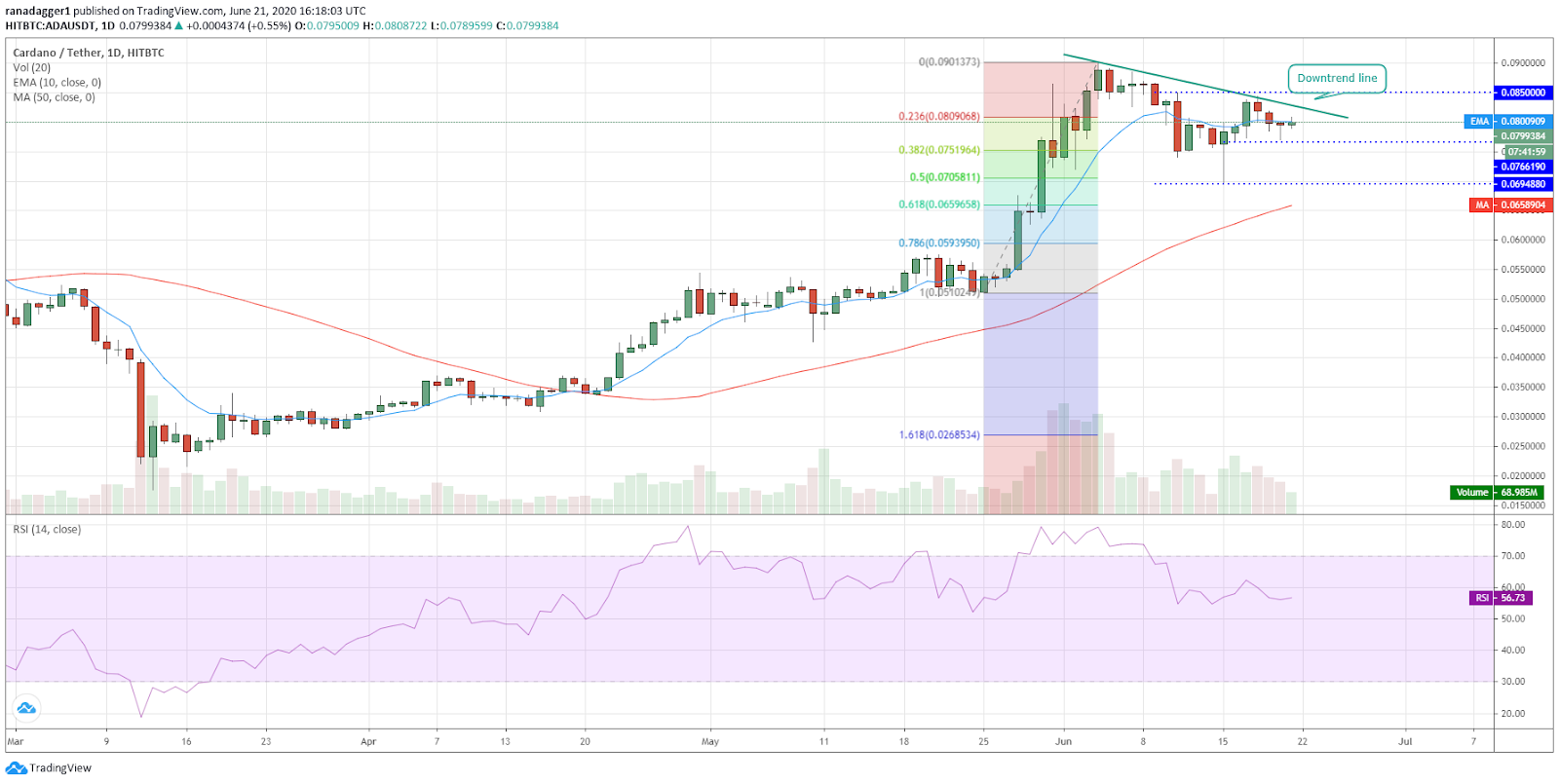 However, the bears are unwilling to give up easily and currently they are defending the horizontal resistance at $0.085.

The 10-day EMA ($0.080) has flattened out and the RSI is just above the 50 level, which suggests that the bulls might be tiring out in the short-term. However, as the 50-day SMA ($0.065) is still sloping higher, the medium-trend remains bullish.

Alternatively, if the 11th-ranked cryptocurrency on CoinMarketCap turns down from the downtrend line and breaks below $0.075, it will signal weakness. If that happens, the decline is likely to extend to $0.0694880 and then to the 50-day SMA. 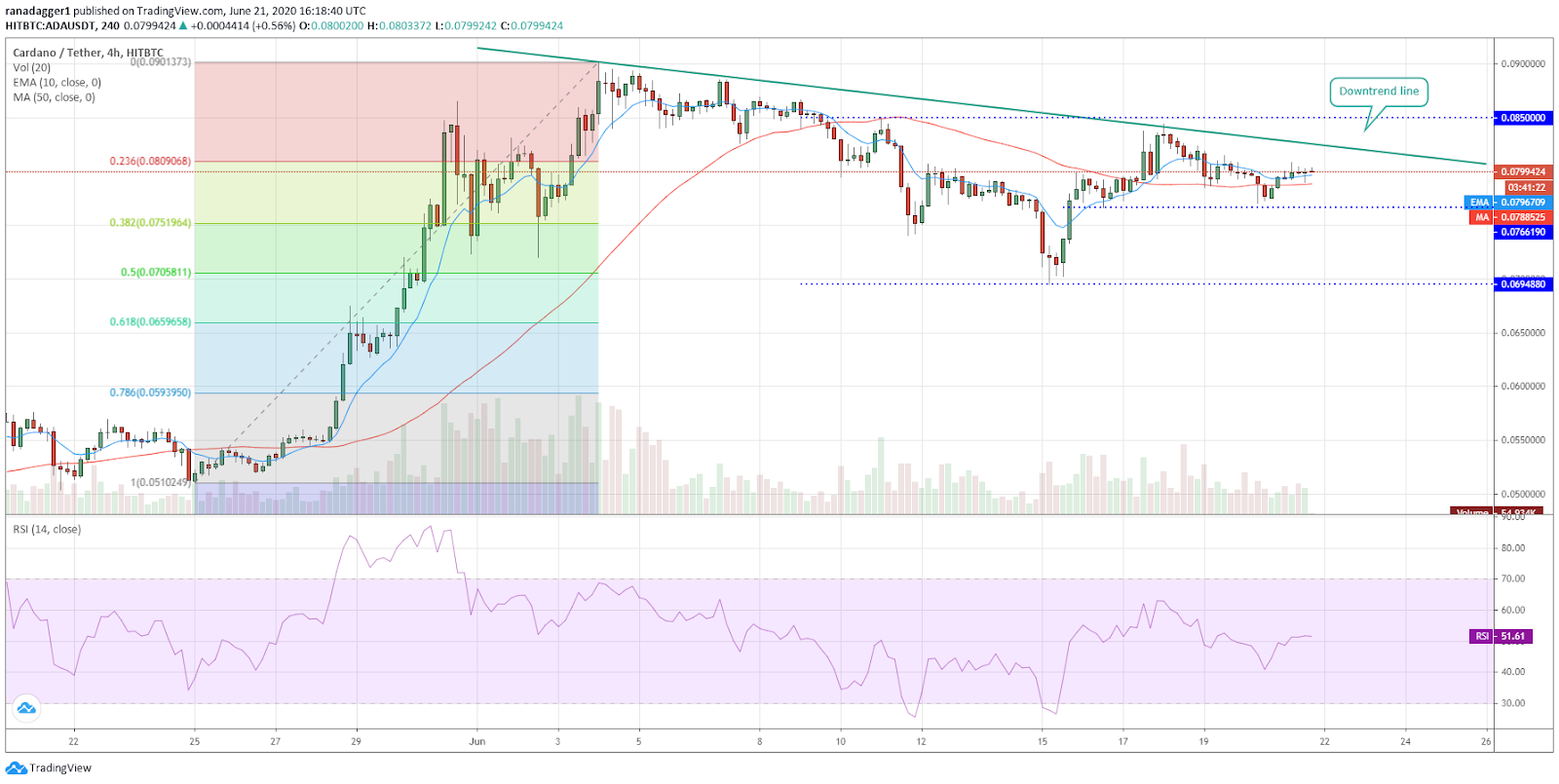 If successful, the traders waiting on the sidelines are likely to enter, which can carry the pair to $0.0901373. There is a minor resistance at $0.085 but it is likely to be crossed.

On the other hand, if the bears sink the pair below $0.0766190, a drop to $0.069488 is likely. The bulls are likely to aggressively defend this support, which might present an opportunity to the traders.

Unus Sed Leo (LEO) had been in a strong uptrend for the past few months. The strong rally had pushed the RSI deep into the overbought territory a few days ago, which suggested that traders were piling on due to fear of missing out on the rally. 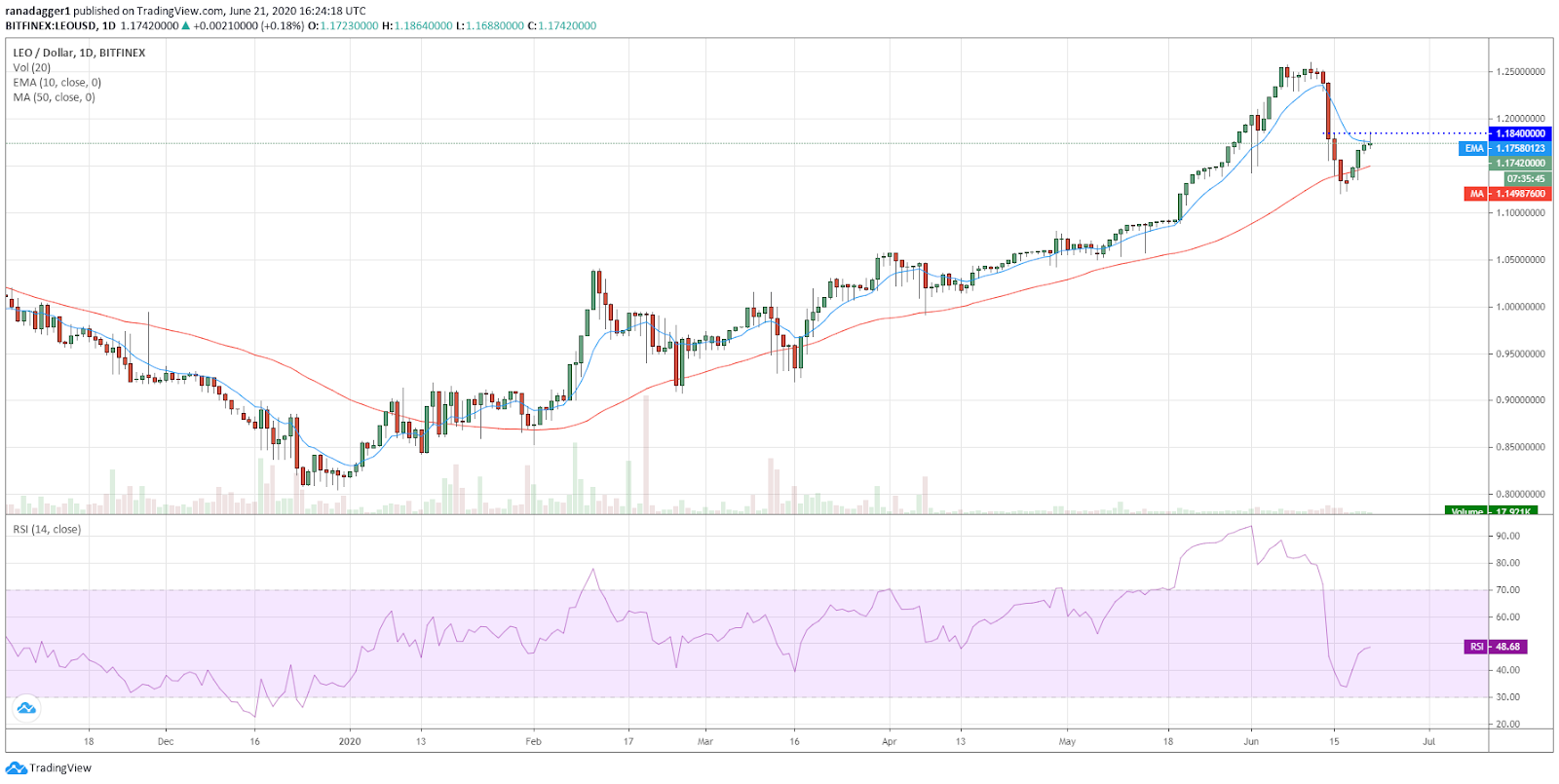 The 15th-ranked cryptocurrency on CoinMarketCap turned down and succumbed to profit booking between June 13–16. However, a positive is that the bulls purchased the dip below the 50-day SMA ($1.149).

This suggests that the sentiment is to buy the dips but the bears are not willing to give up without a fight. They are aggressively defending the 10-day EMA ($1.175).

If the price turns down from the 10-day EMA, the bears will attempt to sink the price below $1.12. If successful, a deeper correction to $1.05 is possible.

Conversely, if the bulls can push the price above the 10-day EMA, a retest of the recent highs at $1.26 is possible. 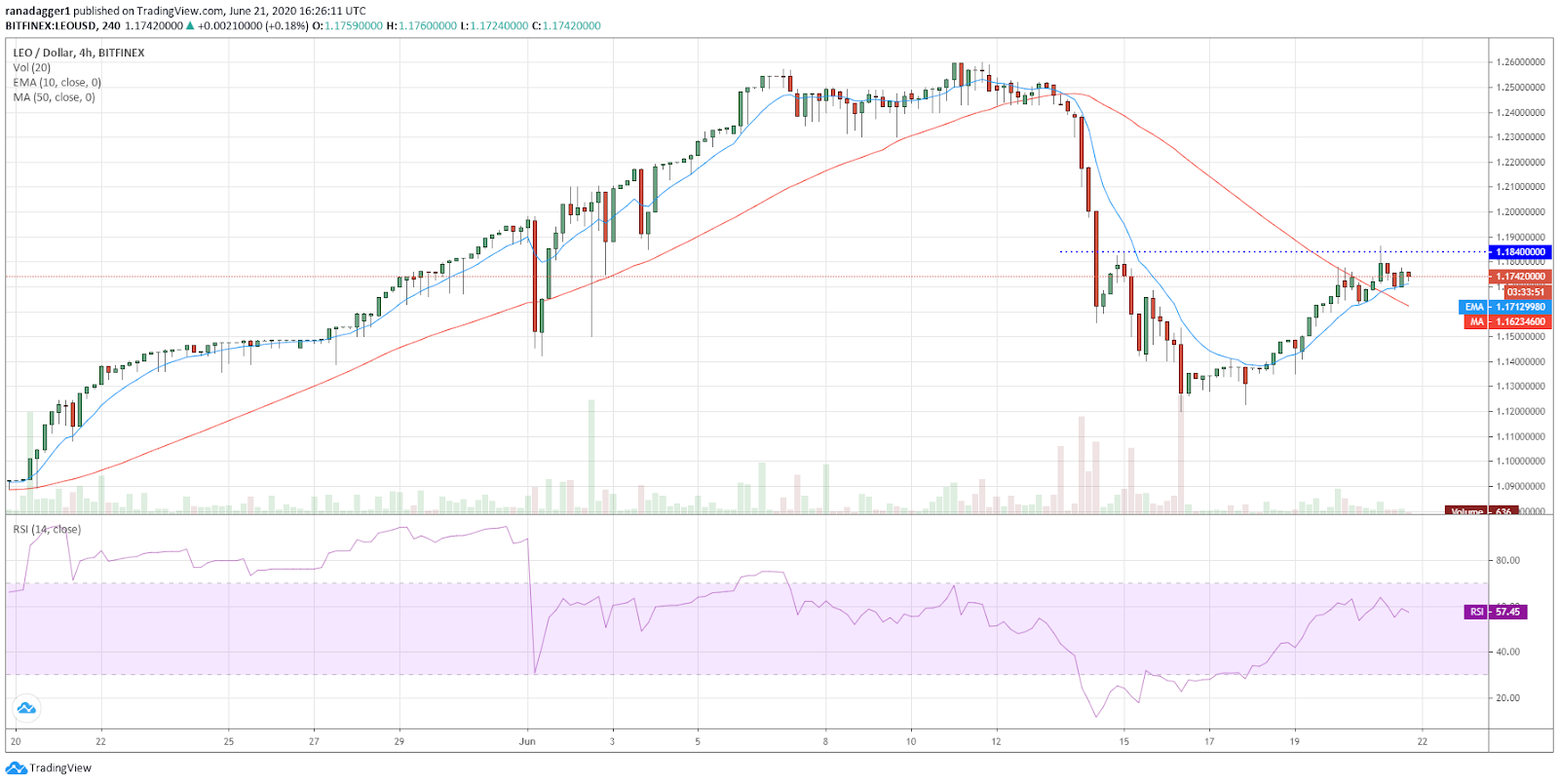 The four-hour chart suggests that the bears are attempting to defend the overhead resistance at $1.184. However, the buyers are not allowing the price to dip below the 10-EMA, which is a bullish sign.

The 10-EMA has turned up and the RSI is in the positive territory, which suggests that the short-term trend is favoring the bulls.

A breakout and close (UTC time) above $1.184 is likely to attract further buying by the bulls. Above this level, a rally to $1.24 is possible.

This bullish view will be invalidated if the LEO/USD pair turns down from the current levels and breaks below $1.16. The first support on the downside is $1.14 and below that $1.12.

Monero (XMR) has been forming an ascending triangle pattern for the past few weeks that will complete on a breakout and close (UTC time) above the $68.4175– $70.0979 resistance zone. The pattern target of a breakout of the triangle is $82.7887. 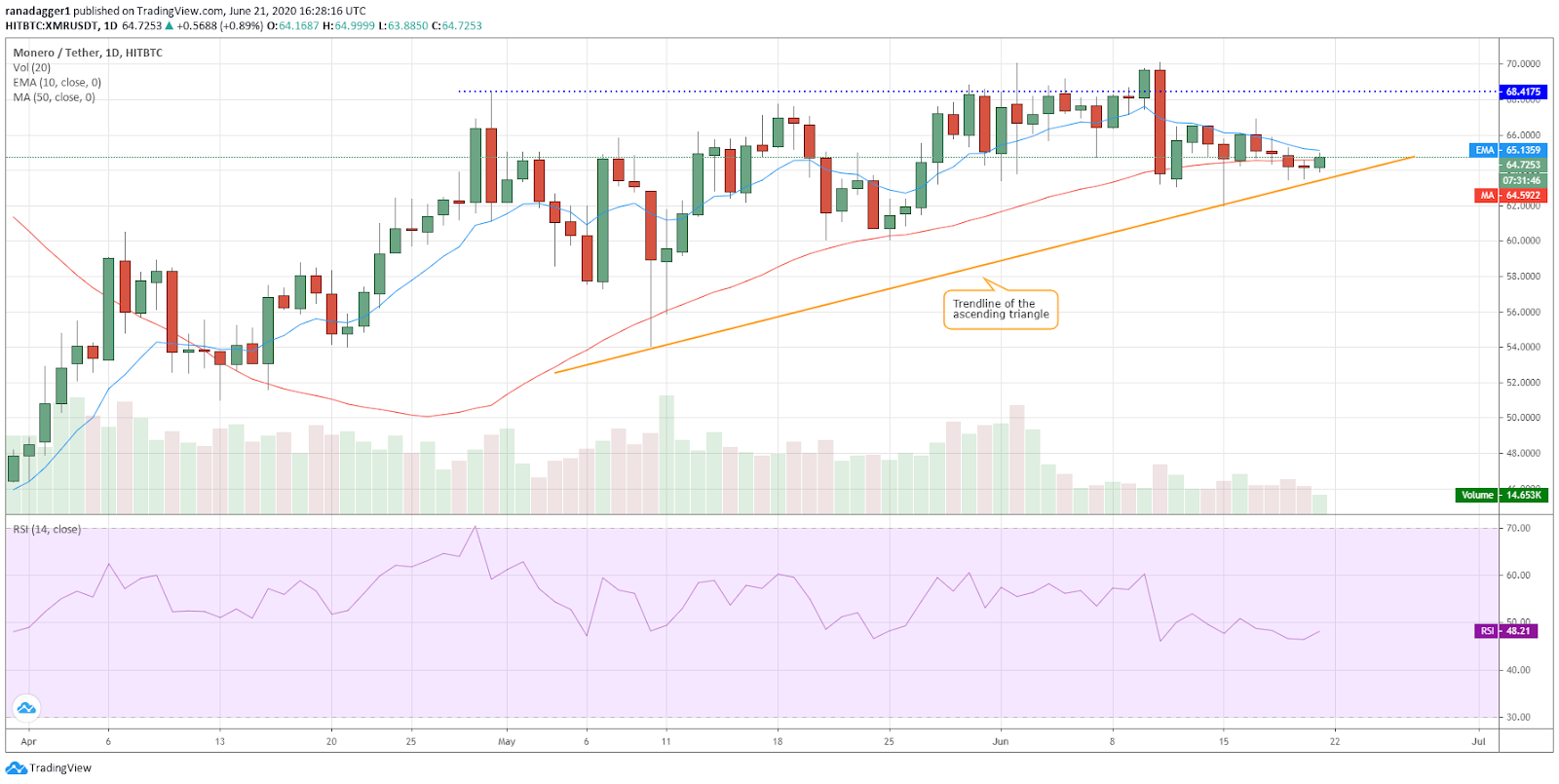 Currently, the bulls are attempting to defend the trendline support of the triangle, which is a positive sign. If the 16th-ranked cryptocurrency on CoinMarketCap rises above the 10-day EMA ($65), the bulls will make another attempt to carry the price to the overhead resistance zone.

This bullish view will be invalidated if the altcoin turns down from the 10-day EMA and breaks below the trendline. A break below the $62–$60 support is likely to intensify selling resulting in a possible drop to $54.0463. 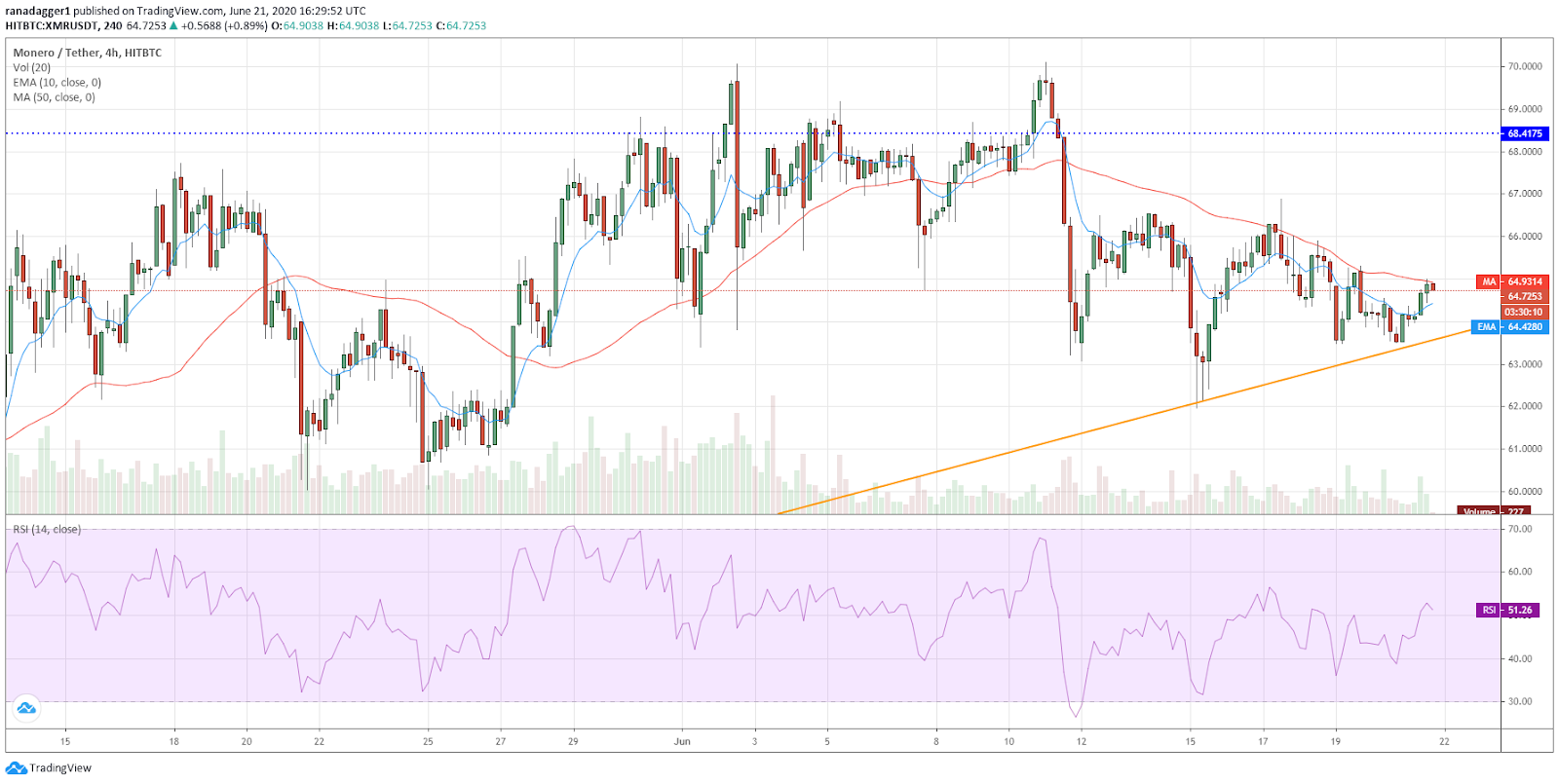 The rebound off the trendline is facing resistance at the 50-SMA. If the XMR/USD pair turns down from the current levels and breaks below the trendline, a drop to $62 is possible.

Although this level is likely to attract selling, the bulls have scaled this level on two previous occasions. Therefore, if they can drive the price above this resistance once again, a retest of $70.0979 will be on the cards.

What the COVID-19 pandemic has taught crypto community about curbing our...