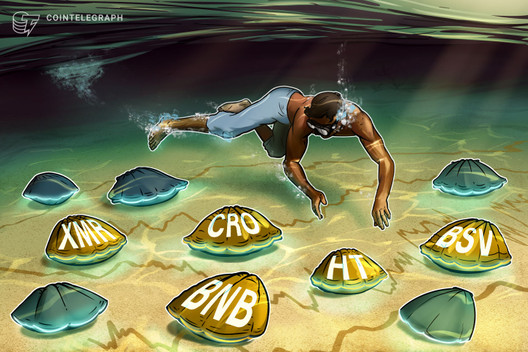 Most top performers have reached their resistance levels and may consolidate or correct over the next week.

Consumer attitudes are changing towards banknotes and credit cards as reports suggest that the deadly coronavirus can spread by their use. The Bank of International Settlements (BIS) has, therefore, urged the central banks to consider developing central bank digital currencies (CBDCs). BIS believes that under the current circumstance, CBDCs will quickly gain prominence. However, it has warned that this move could have a “severe impact on unbanked and older consumers.”

Chamath Palihapitiya, the billionaire CEO of venture capital firm Social Capital, believes that the setting is right for Bitcoin (BTC) to shine. However, he does not find Bitcoin as the right candidate to replace the U.S. dollar or other global currencies due to its volatility. Over the next ten years, Palihapitiya said that Bitcoin could be seen as a hedge against the failure of the traditional framework.

A recent report by Acuiti management intelligence platform showed a low level of adoption among the traditional trading firms (17%) compared to the sell-side service providers (26%). The report also found that security vulnerabilities of exchanges and fears of hacking were the biggest concerns that were holding back the trading institutions.

Nevertheless, there is hope for the future as 97% of the traditional trading firms that took part in the survey said that they are considering trading in digital assets within the next two years.

For now, the retail traders seem to be holding the fort for cryptocurrencies. This early entry into a nascent asset class can turn out to be a massive wealth generator for the retail traders after institutions eventually jump in.

This is the second week that Monero (XMR) has been among the top performers. The privacy coin rallied about 18% in the past seven days and leads among altcoins but will XMR continue to rally into next week?

History suggests that the XMR/USD pair tends to find support or faces resistance at the 20-week exponential moving average (EMA), marked as ellipses on the chart. We anticipate the current relief rally to again face selling at the 20-week EMA, which is close to $61.6219, the 50% Fibonacci retracement level of the most recent downturn.

Both moving averages are flattening out and the relative strength index (RSI) is just below the midpoint. This suggests that the selling pressure has reduced. Therefore, we expect the pair to either consolidate close to the 20-week EMA or dip to $44.50, which can be a good buying opportunity

After a minor dip or consolidation, we anticipate the pair to resume its relief rally and scale above the 50-week simple moving average (SMA), which is close to the 61.8% Fibonacci retracement level. Above this level, a move to the downtrend line is possible.

Our bullish view will be invalidated if the pair turns down from the 20-week EMA and plummets below the $44.50-$38.30 support zone. However, we give this a low probability of occurring.

This week media outlets reported that Binance, the world’s biggest cryptocurrency exchange, acquired CoinMarketCap in an undisclosed deal. In a separate announcement, Binance said that it plans to hire more than 100 new employees.

This shows that the crypto industry is growing in strength while the traditional industries are struggling during the economic downturn caused by the coronavirus pandemic.

Binance also announced its entry into the Korean market for the first time and has also hinted at launching Bitcoin options trading. While the fundamentals are strong for Binance Coin (BNB), does its technicals also indicate strength?

The BNB/USD pair is in a downtrend as it has been trading inside a descending channel for the past few months. The 20-week EMA is sloping down and the RSI is in the negative zone, which suggests that the path of least resistance is to the downside.

If the price turns down from the 20-week EMA, a retest of the long-term trendline support, just above $8 is likely. If this support holds, it might offer a buying opportunity for more aggressive traders.

On a break above the 20-week EMA and a move to the resistance line of the channel is likely. A breakout of the channel will indicate an end of the downtrend.

Major cryptocurrency exchange Huobi has partnered with crypto lending platform Cred to offer its clients monthly interest payments on their pledged crypto assets. This could be an attraction as the central banks have been reducing interest rates across the world. After supporting China via its donation, Huobi’s charity arm has announced an aid package of $50,000 in Huobi Token (HT) to Indonesia to fight against the coronavirus.

The HT/USD pair is trading inside an ascending triangle. After sustaining the price above $3 for the past two weeks, the bulls have made a decisive move higher this week. Hence, in our earlier analysis, we had suggested that traders turn bullish after the price sustains above $3.

This week, the bulls have pushed the price above both the 20-week EMA and the 50-week SMA, which is a positive sign. The pair can now move up to $5.3506, which is likely to act as a stiff resistance.

Our bullish view will be invalidated if the pair turns down from the current levels and breaks below the support line of the ascending triangle. Such a move will invalidate the pattern, which will be a negative sign. Therefore, traders can close their positions if the price sustains below the triangle.

Crypto.com Coin (CRO) has been among the top performers for the third consecutive week. The payments and cryptocurrency platform has waived off the 3.5% credit/debit card fees charged for cryptocurrency purchases for the next three months. Additionally, for the same time period, the company has increased rewards on the purchase of groceries.

The bulls are struggling to sustain the CRO/USD pair above the 50-week SMA at $0.0485. This shows that the bears are aggressively defending this level.

The 20-week EMA and the 50-week SMA have flattened out and the RSI is just above the midpoint, which suggests a balance between buyers and sellers.

Bitcoin SV (BSV) rounded up the list of the top five performers of the past seven days. The altcoin will undergo a block reward halving in less than five days. Coin Metrics believes that this will drive the miners to direct more hash power to Bitcoin as its halving is still more than a month away.

Currently, the bears are aggressively defending the overhead resistance at $185.87. The 20-week EMA and the 50-week SMA have flattened out and the RSI is at the midpoint. This points to a consolidation in the short-term.