Bitcoin (BTC) price has been sideways for several weeks with now over a month since the halving. This is very much reminiscent of early 2017 when Bitcoin hit $1,180 for the second time, triggering a catastrophic sell-off causing the top-ranked cryptocurrency to fall by nearly 40% in a single day.

It was over, Bitcoin was declared dead, and what happened after is the first sign that we were in for a bull market. 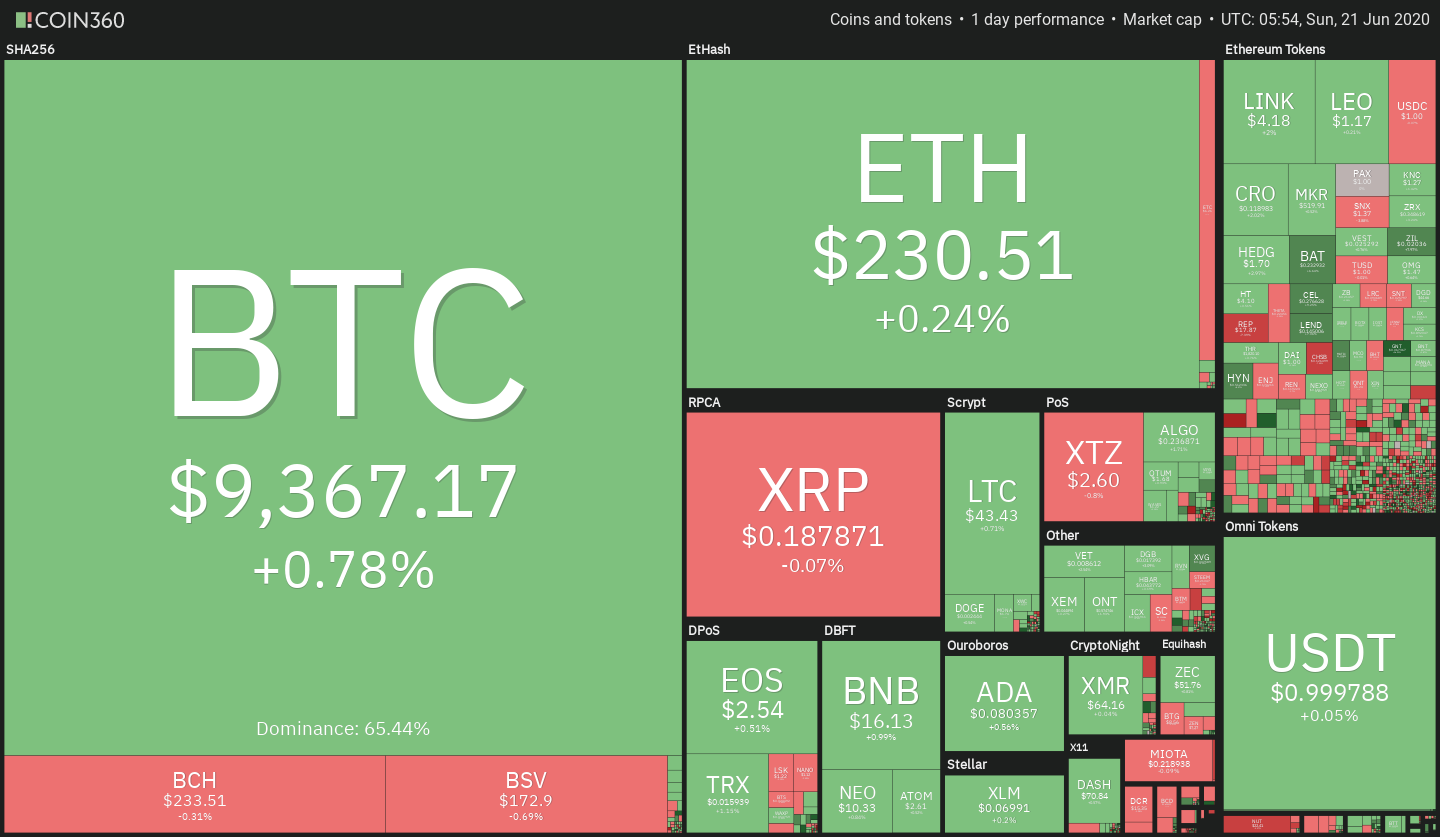 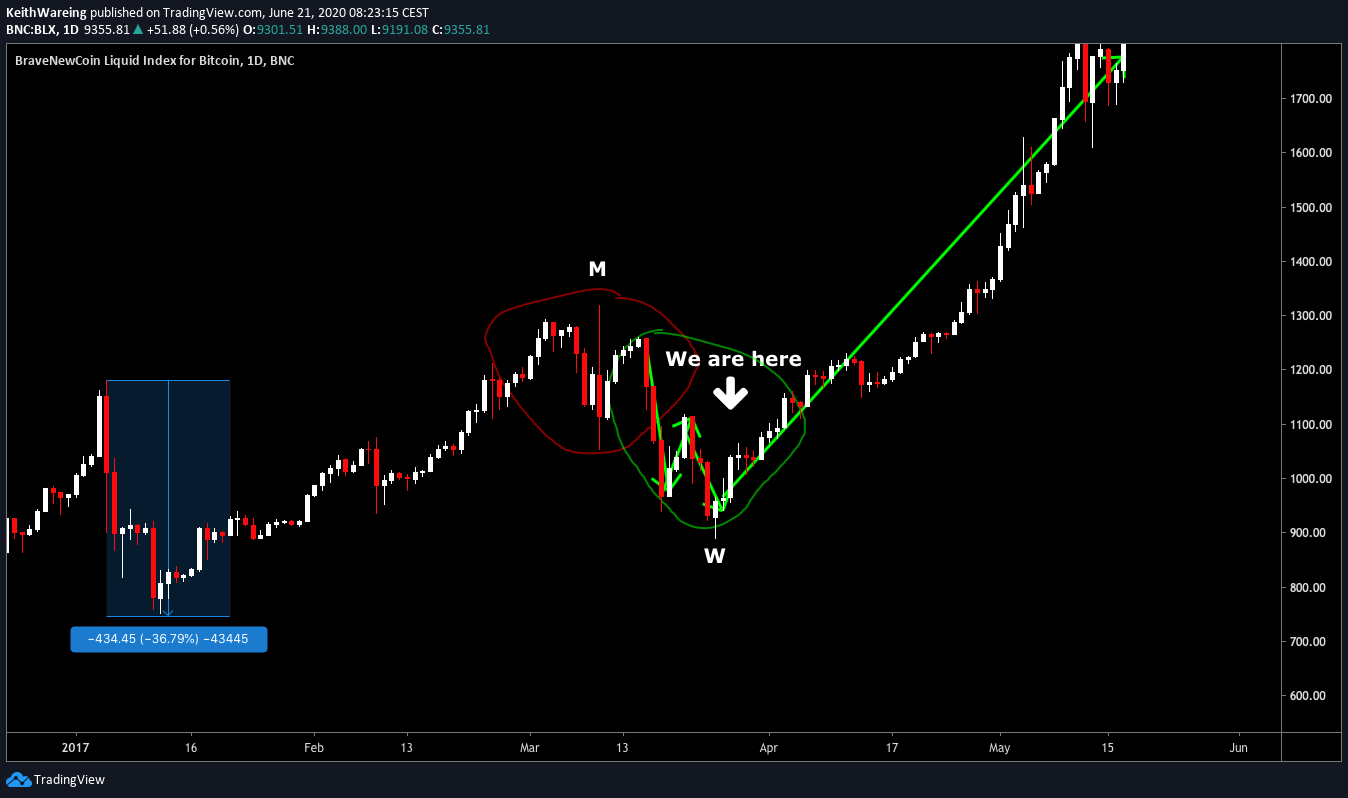 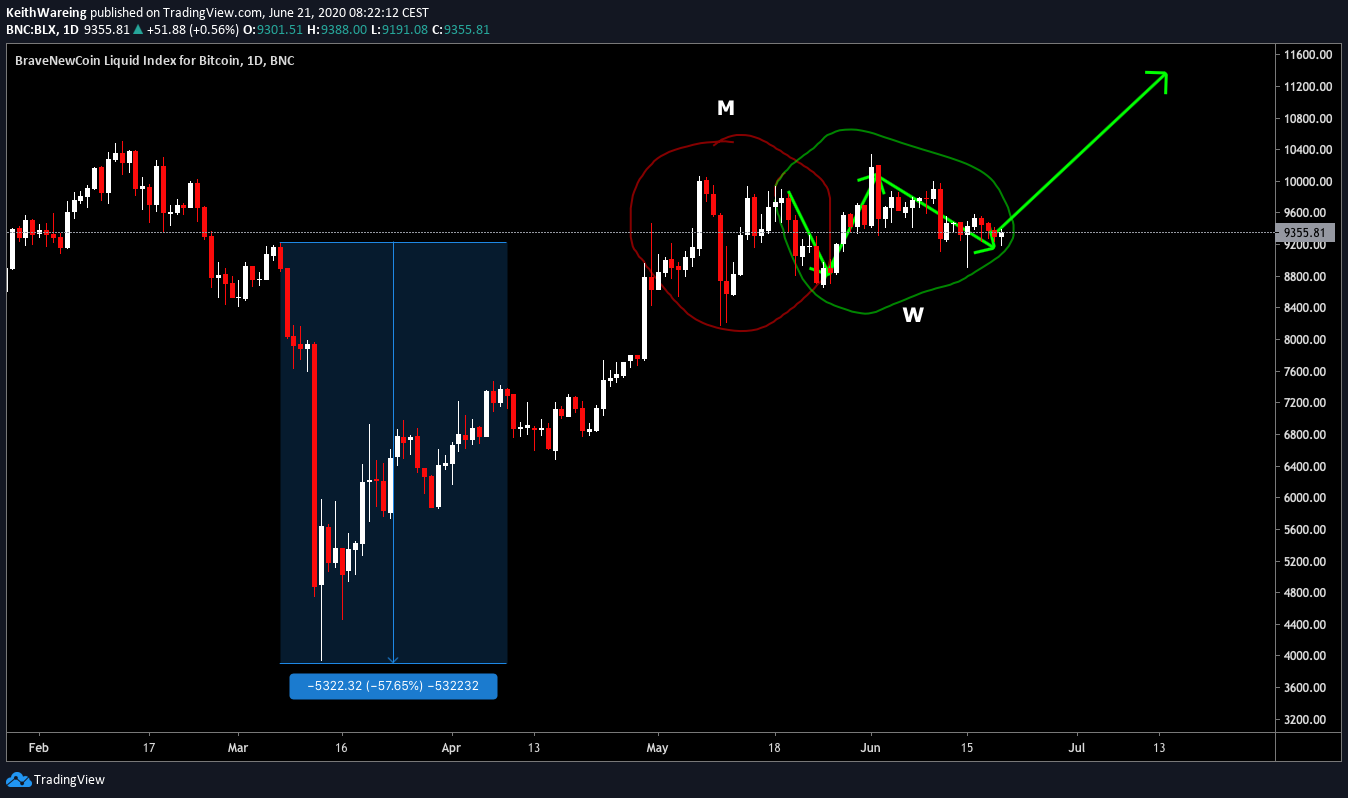 Having studied the charts for repeating patterns, you can see that the pattern that played out after the 40% dump from $1,180 in January 2017 is almost identical to that of the 57% dump that occurred on March 12, otherwise known as Black Thursday.

On both occasions, the price recovered to the pre-dump levels and shortly after an M pattern, typically signaling a bearish double-top.

However, what is different about the M pattern in 2017 is that the end of the M was actually the beginning of a W. Not quite a double bottom, but what came next was a 2000% rise in the value of Bitcoin.

Right now in 2020, we are seeing the same pattern play out. The only question is where is the bottom of the W? Is the bottom in? Or are we expecting another small pullback? 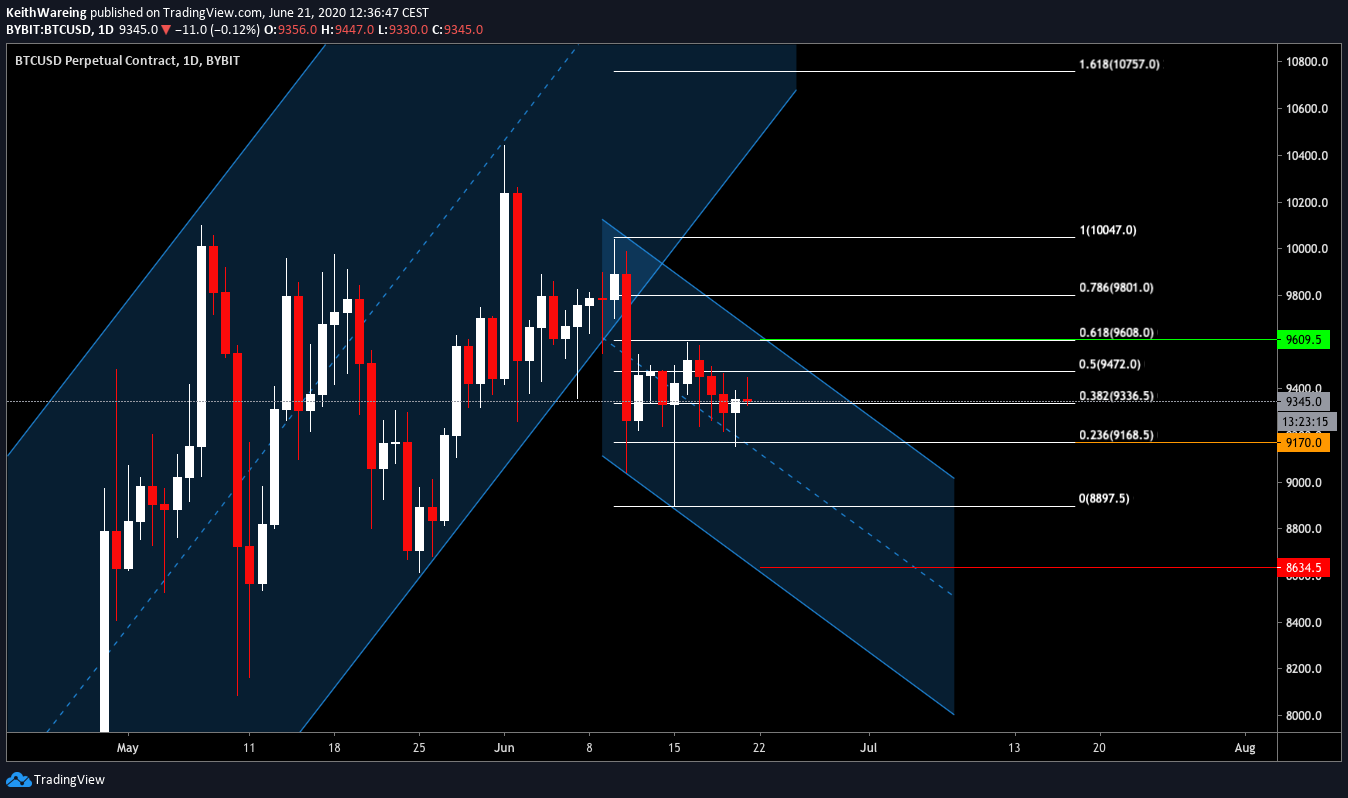 June 11 saw a breakdown from the ascending channel that was forming since the black Thursday dump. It was inevitable that a pullback was due after such a huge recovery.

10 days on and we’re seeing a new descending channel opening up that has perfect Fibonacci levels lining up.

However, while this isn’t something that may seem like the sign of a bull market on face value as far as the charts are concerned, what is interesting is the relevance of the 50% fib which sits around $9,470, and the support of the channel at around $8,635, as these levels become something of a highlight when you look at the orderbook heat map. 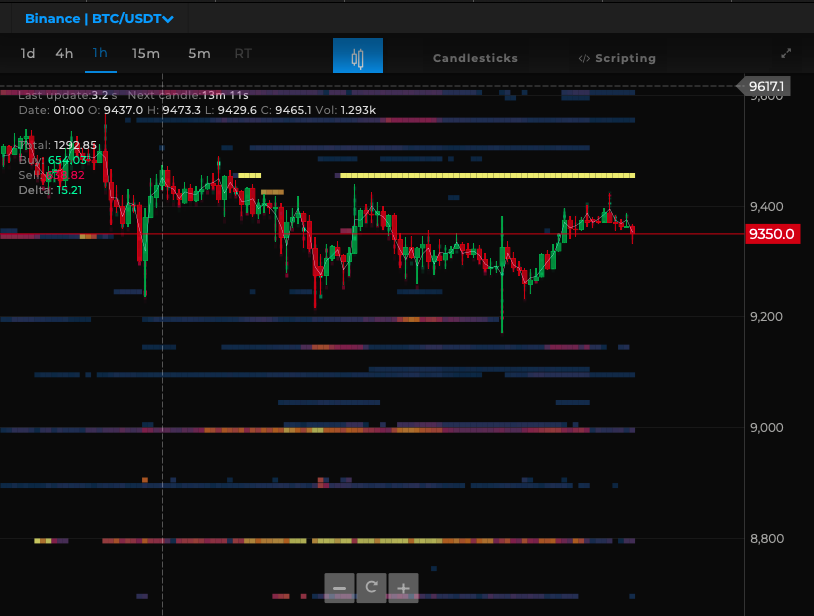 Taking a look at the Binance order book on Tensorcharts and you can see that there are significant sell-orders as denoted by the yellow line around the 50% fib at $9,450 and interestingly a lot of buy orders around $8,800, and another batch at the bottom of the descending channel at $8,696.

There are two things that this tells us: resistance is at $9,450 and support is at $8,700. However, with the current sidewards chop, and the equally matched buyers and sellers, it doesn’t take much for whales to spoof the orderbook to force the market in their favor.

As such, placing large sell orders at $9,450 in order to scoop up some more sats at $8,700 almost looks like too much of an obvious play. But if you spend enough time watching the charts and the orderbook, you will notice that by doing this, it’s easy for whales to accumulate on leverage exchanges.

As the shorts pile in targeting $8,700, the spoofers can take a large long position, remove their $9,450 sell-wall and scoop up all those liquidations — something that is particularly easy to do on the weekends when the volume is thinner on spot exchanges. 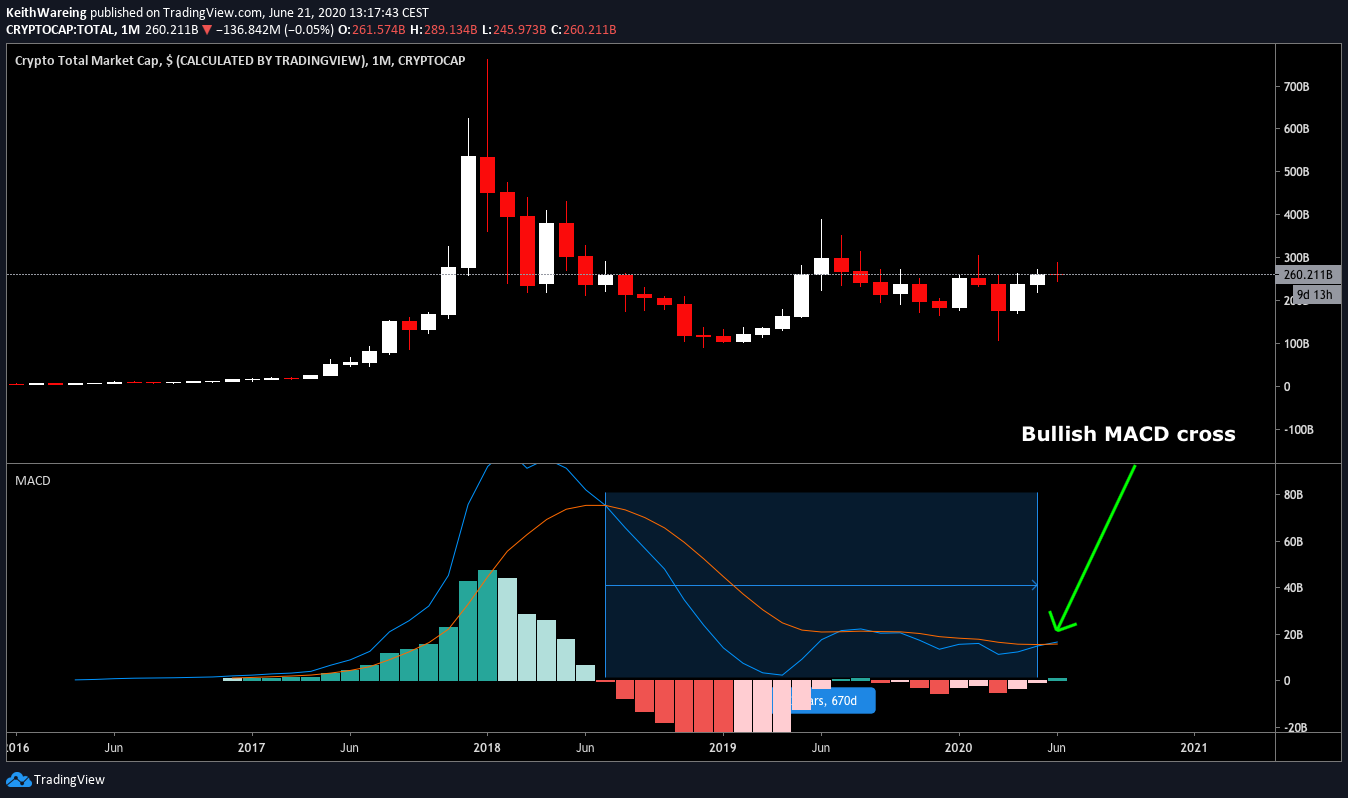 In case you missed it, the long-awaited “altseason” is seemingly upon us. Taking a look at the total crypto market cap chart, we can see that after a 22-month downtrend, the Moving Average Divergence Convergence (MACD) Indicator has flipped bullish.

The first green candle on the histogram combined with the bullish MACD cross is a clear sign that momentum has returned to the overall crypto market. Since doing so, several top-100 coins have experienced massive gains such as ZIL, for example, which recently surged by 300%.

History tells us that when altcoins run, smart money sells back into Bitcoin — rinse and repeat this process a few times and the super cycle occurs. But what drives this madness? Well, that would be thanks to the crypto influencer space, and that brings us to the fifth sign.

Fifth sign: crypto influencer IQ is at an all-time low

Some of you may or may not know this, but I personally thrust myself in the crypto scene in 2016 on YouTube, and in the process picked up close to 50,000 subscribers talking about Bitcoin and altcoins.

Being my first halving cycle, I was in fairness very naive and I personally believed that many altcoins would outperform Bitcoin. While this is true of a handful of projects, it is not something that the majority of crypto influencers have a clue about and I was no exception.

Either you get lucky with a pick or you have a big enough following to push a low cap coin up 400% by talking about it for a few minutes making you look like a crypto investment guru.

The sheer number of crypto videos and crypto tweets I am seeing lately of people attempting this, as well as the rise or even the return of so-called “crypto experts,” is simply staggering.

All this combined with the fact that my email inbox is filled with offers to promote various coins and ICOs again reminds me of the beginning of the 2017 bull market, the bull run that changed the public perception of Bitcoin forever.

Fortunately, I will not be participating in the circus of clowns doing it this time around. However, one has to admit, it does help to get people into the crypto space, and one can argue that it can help fuel the altcoin to Bitcoin super cycle.

So with all these signs, what does the week ahead have in store from a bullish perspective?

The first level of resistance will be getting through that $9,450 sell wall. From here, closing above $9,600 (as discussed in a recent analysis here) is needed to invalidate the descending channel, which will put Bitcoin on a path to attack the dreaded $10,500 multi-year resistance level. This is the definitive level that needs to be broken to enter a true bull market.

On the flip side, $9,150 is the first level of support, followed by the bottom of the channel around $8,700 as the final level for buyers to step in. Losing $8,700 could put Bitcoin in a massive death spiral, which personally I consider being wishful thinking from bitter bears that didn’t buy the dip at $4,000 in March.

Crucial Factors to Consider Before Bitcoin Closes Its Monthly Candle