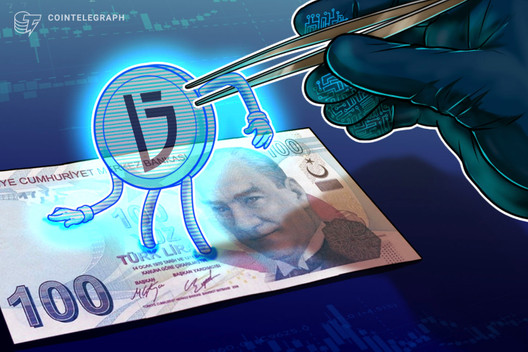 Cointelegraph spoke to BiLira and BTSE to find out more about what the listing means for Turkey’s burgeoning cryptocurrency sector.

Leong told Cointelegraph that BTSE entered the Turkish market earlier this year, stating that the exchange has garnered “a strong and growing community in Turkey.”

He also noted “an increase in demand for onboarding options through the Turkish Lira,” prompting the decision to list the TRYB stablecoin.

BiLira is the 19th crypto asset for which BTSE has introduced pairings.

Turkey is ripe for crypto adoption

Speaking to Cointelegraph, Vidal Artditi, BiLira’s COO, predicted that Turkey will emerge as a leading jurisdiction within the global blockchain industry, emphasizing high levels of crypto literacy and adoption among the general population.

Anecdotally, he reports that Turkey’s citizens predominantly use crypto assets for trading and to hedge risk. Arditi asserts that trading is a fundamental part of Turkish culture, stating that “the cultural nuances of [Turkey] really resonate with blockchain and cryptocurrency.”

“Mobile penetration in this country is north of 90% […] You can use QR codes and you can use your mobile banking app for pretty much anything,” he adds.

“We’re not here to create a bubble”

Despite emphasizing the strong Turkish trading traditions, Artditi emphasized that BiLira “is not here to create speculation”

“We’re not here to create a bubble. We’re here to create real use cases, which is why we’ve set up our system and our platform in a way that people can buy up to 100,000 euro per month without paying even a lira on commissions,” he said.

“It’s to be able to make it as easily accessible, even if it’s going to be damaging financially to our company in the short term. Just to make sure we highlight the value proposition of this product and how it can really change the lives of these people.”

“There are a lot of immigrants who live in this country who send paychecks every week to their families in different countries. There are people who don’t necessarily have a bank account who would like and can transfer [this] cryptocurrency with a few clicks of a button,” Artditi added.

ArbiSmart Wallet: Earning Bitcoin Safely, up to 45% Returns at Close...