According to the official USMS website, the authority is planning to sell “approximately” 4,040 Bitcoins (4,040.54069820), requiring a $200,000 deposit in order to take part in the auction. The USMS said it will return the deposits to non-winning bidders, promising to initiate the return of losing bid deposits within five business days after transferring bitcoins to the winning bidder.

At press time, the total amount of the auctioned Bitcoin is worth around $37.4 million, according to data from Coin360. The Bitcoin for the bid was seized in various federal criminal, civil and administrative proceedings, the agency noted.

Bidder registration is open from Feb. 3 until Feb. 12. The online auction will take place on Feb. 18. As the authority is planning to conduct the auction from 8:00 AM EST until 2:00 PM EST on Feb. 18, the announcement of the winners is scheduled to come at 5:00 PM EST. However, the USMS may spend more time to announce winners based on the number of received bids as well as the complexity of the review process, which may require additional time, the announcement reads.

Similarly to previous auctions held by the USMS, the upcoming auction will be divided in parts. Specifically, the Bitcoin auction will be separated into series, with 2,500, 1,000, 500 and 40.54069820 Bitcoin each. 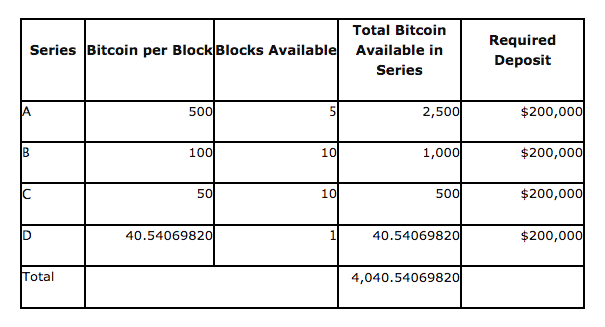 The recently announced Bitcoin auction follows a number of similar bids in recent years. As such, in January 2018, the USMS sold over 3,800 confiscated bitcoins before announcing a 600 BTC bid in October.

Auctions for confiscated bitcoins have been practiced by multiple governments to date. In February 2018, the United Kingdom and Ireland-based auction house Wilsons Auctions hosted their first Bitcoin auction, as reported by Cointelegraph. Previously, the South Korean government announced it plans to auction 216 bitcoins in 2017.

The infrastructure bill is hanging in the balance. What would its...