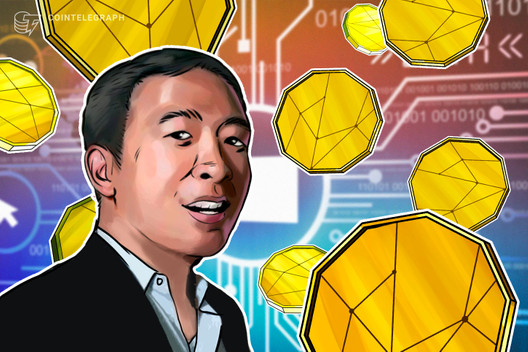 United States Democratic presidential candidate Andrew Yang talked about cryptocurrency regulations ahead of the upcoming caucuses in the state of Iowa.

During an interview with Bloomberg Politics on Jan. 29, Yang said that there needs to be a uniform set of rules and guidelines when it comes to the use of crypto assets:

“Right now we’re stuck with this hodgepodge of state-by-state treatments and it’s bad for everybody: it’s bad for innovators who want to invest in this space. So that would be my priority is clear and transparent rules so that everyone knows where they can head in the future and that we can maintain competitiveness.”

The presidential candidate further added that crypto’s underlying blockchain technology is “very high potential and we should and we should be investing in it.” He added that people who want to invest in crypto assets could not be prevented even if regulators tried.

Yang’s statements come as no surprise, given that he has previously written about his plan to regulate the industry in a way that will help foster development and deliver certainty to investors.

On Feb. 1, voters in the Iowa state caucuses will go to the polls to decide who they want to support among a field of candidates seeking the nomination of the Democratic party. The caucuses are significant in that they are the first major electoral event during the presidential election cycle, and many candidates who win the caucuses go on to receive the eventual nomination from the national party to run in the general election.

However, as the date draws nearer, Yang’s support is hardly notable in many major polls. American election tracking project FiveThirtyEight released recent polling data, in which Yang’s name did not appear at all.

Indeed, in the same interview in which he mentioned cryptocurrencies, Yang said he would be unsurprised if his supporters opted to vote for Vermont Senator Bernie Sanders, who has recently surged in the polls against former Vice President Joe Biden.

Yang’s interactions with the crypto community

While Andrew Yang’s ideas appear to be in line with the desires of the cryptocurrency community at first glance, in the past he has raised criticism from major personalities in this industry.

As Cointelegraph reported in November 2019, Bitcoiners did not appreciate it when he said he was “literally trying to give everybody money,” referring to his plan to tackle poverty by offering a universal basic income.

In the face of record-high U.S. and global debt, the idea of expanding access to fiat currency as a benefit appeared to generate anger among crypto commentators.