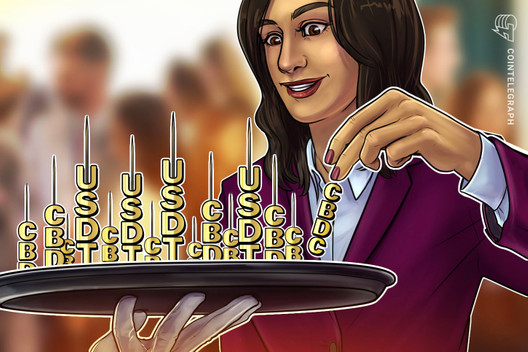 “In the long term, we believe that Tether will continue to exist alongside CBDCs,” the Tether CTO said to Cointelegraph, citing the token’s performance on several different blockchains including Algorand, Ethereum, EOS, Liquid Network, Omni and Tron. “Tether will remain in demand as it continues serving and unifying a variety of ecosystems.”

Cointelegraph reported on July 15 that the Japanese government was planning to include consideration of a central bank digital currency (CBDC) in its official economic plan, shortly after the Bank of Japan announced it would start experimenting with a digital yen. Across the world, Bank of England governor Andrew Bailey said the institution was also considering the issuance of a digital pound.

Ardoino said it was unlikely for CBDCs in any country to replace Tether (USDT) as the token has dwarfed rival stablecoins like USD Coin (USDC) and Binance USD (BUSD) in terms of market cap, trading volume, and number of users.

Some digital yuan experts agree. Cointelegraph reported Charles Yang of Genesis Block said China could not easily stop the circulation of USDT, despite any threat it may pose to capital controls and oversight. Hundreds of millions of dollars in Tether are traded every day in the Asian nation.

Following Tether overtaking XRP to become the third-largest token by market cap in May, a recent Bloomberg report predicted that USDT could eventually pass Ethereum (ETH) to fill the number two slot. According to crypto analytics firm Messari, USDT currently has a market capitalization of roughly $10.3 billion.