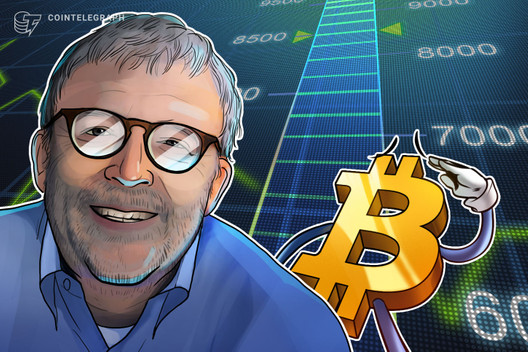 Bitcoin (BTC) investors who are waiting for a price dip to even $6,000 have “missed” their opportunity already, veteran trader Peter Brandt says.

In a market discussion with Cointelegraph on Jan. 17, the 40-year market stalwart said that contrary to what some believe, BTC/USD has already hit its floor.

Brandt: “The weak hands are out”

“They all now want to sit and buy a break back to $6,000 or $5,000 and they’ve missed the bottom — and during that bottom, I think you had a lot of people accumulate with strong hands,” he summarized.

“The weak hands are out; the strong hands own it.”

As a long-time Bitcoin advocate, Brandt was continuing a bullish streak he began on social media earlier this month.

As Cointelegraph reported, his personal sentiment has undergone a change since late 2019 — as recently as December, he had warned there remained a chance for Bitcoin to put in lower lows in 2020 thanks to novice investors he described as “cryptocultists.”

Now, however, the danger has subsided, Brandt suggested, in comments echoed in the discussion by fellow trader Alessio Rastani.

“I think anybody who is interested in what Bitcoin has to offer has to have at least 10-20% of an ownership position relative to the capital that they could commit to Bitcoin in a bigger perspective,” he advised.

Bitcoin has sealed monthly gains of around 35%, with 2020 progress alone at 25%. Markets reached local highs of $9,000 on Friday, before encountering resistance, which coincides with the 200-day moving average price, something which has historically stifled bullish progress.