Minutes ago as of the time of this article’s writing, Bitcoin breached a daily high, rallying past $7,000 to near $7,050.This meant that from Sunday’s lows, BTC is up 5%, echoing gains seen in the stock market, despite a worsening coronavirus outbreak.

With the recent strength in mind, what are analysts expecting to come next?

What’s Next For Bitcoin?

Right now, all analysts have their eyes on notable candle closes, like the six-hour, daily, or weekly. The rally aforementioned is Bitcoin’s fifth attempt at retaking $7,000 on a four-hour candle basis, with all four attempts previously failing, suggesting that $7,000 is a key psychological and technical resistance.

It failing to retake this level, which some analysts have since dubbed a “decision point” due to its importance, could indicate impending bearish pressure for the crypto market.

As reported by NewsBTC on Sunday, Nik Patel — a markets analyst and the author of the crypto trading bible, “An Altcoin Trader’s Handbook” — suggested that BTC failing to surmount $7,000 on a medium-term time frame will likely lead to a retracement to $5,680, which would be a 20% drop from $7,000.

The chart accompanying his sentiment indicates that $7,000 was the weekly high seen last week, making it important from a technical analysis perspective.

The call for a retracement has been echoed by another popular crypto trader, who shared the below image on April 4th, predicting the ongoing “sweep” of the local highs around $7,000. What comes next, they explained, will be a 7% retracement back to $6,500, which would kill the bullish momentum that has been forming over the past three weeks once and for all. 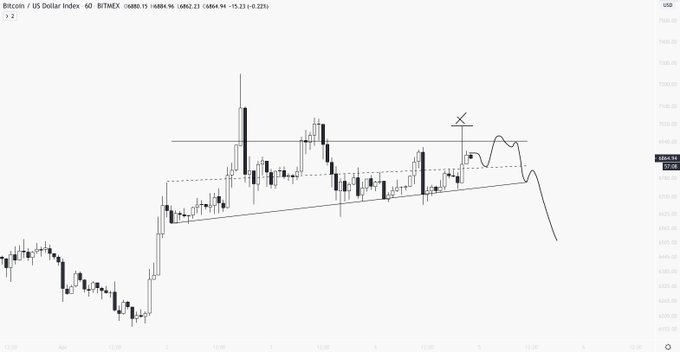 However, if Bitcoin manages to decisively reclaim $7,000, further upside is likely. A chart from trader Filb Filb indicated that Bitcoin retaking $7,000 would likely support a rally towards $8,000, at which point it is likely to be rejected due to the “resistance cluster” in that region.

At Least The Bottom Is In

While there seems to be an opportunity for traders to catch some short-term downside, a consensus is building that the long-term bottom for the Bitcoin price was established in March.

Utilizing two indicators, on-chain analyst Willy Woo observed that the way in which Bitcoin’s mining ecosystem is developing gives credence to the sentiment that BTC won’t fall any lower than $3,800, March’s lows:

‘Great Artists Steal’ – What Enterprise Blockchain Can Learn From the...

Ethereum Down 5%, But Market Sentiment Is Still Positive