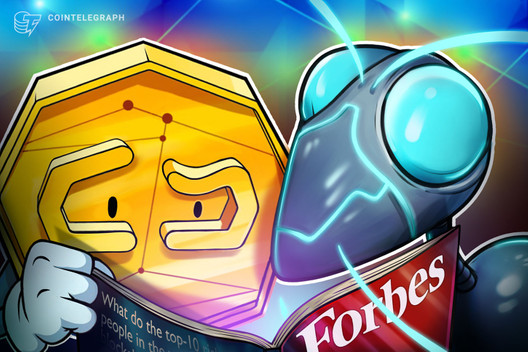 For the past decade, blockchain, Bitcoin (BTC) and other cryptocurrencies have disrupted everything they have touched — including banking, hedge funds, law enforcement, health care and real estate to name a few. Blockchain technology and cryptocurrencies are set to revolutionize many industries, yet this is only the beginning.

However, despite the overall enthusiasm and excitement around cryptocurrencies and blockchain technology’s capacity to revolutionize the world as we know it, many of the world’s richest men have expressed mixed opinions.

For instance, some billionaires, like Warren Buffett, are known to be staunch Bitcoin critics while others, like Tim Draper, are avid supporters. In 2018, for instance, Buffett predicted that Bitcoin, in particular, will have a “bad ending.”

Jeff Bezos is the world’s richest man with a net worth of $130 billion according to the 2019 Forbes list. The founder of Amazon, the e-commerce colossus, has been rumored countless times to have invested in Bitcoin. Plus, Binance CEO Changpeng Zhao has been quoted saying that he expects Bezos’s online retail giant to be the catalyst for the next Bitcoin bull run.

However, none of the rumors have been confirmed, and Amazon has denied any plans to accept Bitcoin or any other crypto on its platform. The only blockchain-positive development associated with Jeff Bezos is amazon’s cloud computing arm 2018 partnership with a blockchain startup called Kaleido.

With a net worth that exceeds $100 billion, Bill Gates has featured among the world’s richest for quite some time. Although Gates had earlier shown enthusiasm for Bitcoin in 2014, where he told Bloomberg in an interview that Bitcoin was better than any currency, he has since retracted his remarks, noting that the anonymity of digital currencies is not good for transactions.

Furthermore, during a 2018 interview with CNBC, Gates said: “Bitcoin and ICOs are completely speculative.” However, like most critics, he added that blockchain, the underlying technology behind most cryptocurrencies, has its merits.

Buffett is a longtime critic of Bitcoin and cryptocurrencies. Before the 2018 Berkshire Hathaway annual shareholders meeting, the longtime investor called Bitcoin a “mirage” that is “probably rat poison squared” and “not a currency.”

However, in a recent interview, Tron CEO Justin Sun outlines that Buffett was very open to new technologies. This came after Sun had a charity lunch with the Oracle of Omaha just a month ago, during which the young CEO tried to explain crypto’s potential to Buffett.

Even though Buffett went as far as accepting Ton (TRX) from Sun, Buffett maintained that he does not own any crypto and reiterated that he will never own crypto since it has “zero value.”

With a business empire that spans over 70 brands including Sephora and Louis Vuitton, Bernard Arnault has featured among the world’s richest since 1985 when he bought Christian Dior. Since then, his luxury brands have grown, posting record sales — especially in 2018 — according to Forbes.

Although there are no official comments of Arnault about Bitcoin or blockchain technology, reports show that the billionaire teamed up with Microsoft Azure and ConsenSys last year to develop a blockchain platform that will track products produced by LVMH.

Other blockchain and crypto-related reports about Arnault include one, in which he rejected involvement in setting up a Belgian crypto trading company called Abesix Belgique.

Larry Ellison, the co-founder of Oracle, is worth over $50 billion and is listed as the world’s seventh-richest richest man. He is one of the few billionaires who have been vocal about Bitcoin and issued positive remarks about the merits of blockchain technology.

In a 2017 article by Business Insider, Ellison is quoted saying that blockchains are often thought of in the context of Bitcoin and other cryptocurrencies: “But increasingly, companies outside of finance are using blockchain technology to replace long-held authentication practices in law, real estate and shipping.”

After Facebook’s debacle with the launch of its stablecoin cryptocurrency called Libra, a lot of people have expressed concern that if all of Facebook’s users adopted Libra as a currency, most of the world’s fiat currencies would be compromised.

However, while onlookers are concerned about the threat Libra would bring to local currencies including Bitcoin, Zuckerberg maintains that “when we do things that are going to be very sensitive for society, we want to have a period where we can go out and talk about them and consult with people and get feedback and work through the issues before rolling them out.”

Since 2018, Zuckerberg has held a positive stance particularly toward blockchain technology, saying: “The technology powering Bitcoin could help improve Facebook in the future.”

Apart from being listed among the top ten richest people in the world, Michael Bloomberg is currently running for as a presidential candidate for the Democratic Party in the 2020 United States presidential elections. Unlike other high ranking politicians, such as the U.S. President Donald Trump, who expressed negative opinions about Bitcoin and Facebook’s Libra last year, Bloomberg has shown a somewhat positive view on crypto and blockchain technology.

Bloomberg is quoted saying: “Cryptocurrencies have become an asset class worth hundreds of billions of dollars, yet regulatory oversight remains fragmented and undeveloped.” He also added: “For all the promise of the blockchain, Bitcoin and initial coin offerings, there’s also plenty of hype, fraud and criminal activity.”

With reports of surging popularity in the polls, Bloomberg’s policies on financial reforms are in the spotlight. The former New York mayor recognized cryptocurrencies as an asset class and has included policies in his campaign that will protect consumers from crypto-related fraud and clarify the responsibilities of crypto regulators with a framework to define initial coin offerings.

And a few other billionaires with strong thoughts on crypto

Ray Dalio, the founder of Bridgewater Associates, has recently spoken in an interview with CNBC where he echoed concerns about the state of the global economy as have many Bitcoin investors and supporters, saying: “We’re in a spot in monetary policy where you can no longer stimulate the same way you did before.”

However, instead of advising those who are concerned about a coming global economic downturn to turn to Bitcoin, Dalio believes that gold is a much better safe haven than Bitcoin. In Dalio’s opinion: “There are two purposes of money: a medium of exchange and a store-hold of wealth. And Bitcoin is not effective in either of those cases now.”

In the interview, Dalio pointed out that Bitcoin is still too volatile to sufficiently act as a proper store of value.

Recently, Elon musk has been in the spotlight for his cryptic tweets about Bitcoin. However, the CEO and founder of Tesla finally revealed that he is “neither here nor there on Bitcoin.” Although Musk sees the value of Bitcoin, he believes that it is mostly used to perform illegal transactions:

“This sort of gets the crypto people angry, but there are transactions that are not within the balance of the law.”

He further added that although he sees “crypto as an effective replacement for cash,” he did not see it as a primary replacement. Granted, Musk does not fully endorse cryptocurrencies, however, he admits that there is a change coming to the financial industry and that banks need to watch out.

According to a 2018 article by Bloomberg, Jack Ma issued a warning over cryptocurrencies, declaring Bitcoin to be a potential bubble. The founder of the giant e-commerce Company Alibaba and chairman of Ant Financial, a Chinese-based financial conglomerate, has revealed in the past that he pays special attention to Bitcoin and blockchain technology especially toward their capacity to establish a cashless society.

Even recently, during the 20th annual China Association of Science and Technology, Ma maintained his stance on Bitcoin being a possible bubble and pointed out blockchain as the “key that opens a treasure of chest of effective new technological tools.”

Mike Novogratz, CEO and founder of crypto merchant bank Galaxy Digital Holdings and the former manager of the Fortress Investment Group, correctly predicted that Bitcoin would hit the $10,000 mark by the end of 2017.

Popularly known as Novo, the unlikely crypto hero has maintained that: “Bitcoin is going to be the digital gold.” According to Novogratz, Bitcoin is “the only one of the coins out there that gets to be a legal pyramid scheme. Just like gold is.”

To put his money where his mouth is, it is reported that Novogratz has invested about 30% of his fortune in cryptocurrencies. Despite making a huge loss on Bitcoin’s historic plunge in 2018 where his Galaxy digital Holdings reportedly lost $136 million, Novogratz remains undeterred.

He is quoted by Bloomberg saying that despite the frustration of investors losing money, the company has a “business that can break even” and that they have “plenty of cash to run the business for a long time.” Recently, the billionaire reiterated that he is even “more bullish on BTC” despite Bitcoin’s price struggle with volatility.

In September 2019, venture capitalist Tim Draper doubled down on his previous prediction of Bitcoin hitting $250,000 by 2022 when he added that those predictions were “conservative.”

Draper has maintained a bullish stance on Bitcoin since June 2014 when he bought Bitcoin that had been seized and auctioned off by the U.S. Marshals service. The total amount of the Bitcoin he owned at the time was estimated to be worth $19 million.

Recently, Draper spoke to CNBC where he revealed that six months ago, he pulled his wealth out of public stock markets to hold more of it in his Bitcoin portfolio. In regards to the worldwide stock market plummeting due to coronavirus concerns, Draper revealed that his exposure was limited.

After Bitcoin’s price surge in 2017, Tyler and Cameron became the first Bitcoin billionaires. The two brothers and founders of Gemini, a crypto exchange, claim to own about 1% of the total Bitcoin in circulation.

Despite the seeming bad blood between the twins and Facebook’s founder, Mark Zuckerberg, the Winklevoss twins have revealed in interviews that they believe Facebook’s Libra is positive news for the crypto space. Furthermore, according to a CNBC report, last year, the twins talked with Mark Zuckerberg before Facebook’s announcement of its Libra stablecoin. Currently, the Winklevoss brothers are counted among the world’s top Bitcoin millionaires.

Bill Harris, the former CEO and co-founder of PayPal, is known for being one of the harshest Bitcoin critics. In an article he wrote in 2018, the former CEO of PayPal called Bitcoin a scam, adding that “it’s a colossal pump-and-dump scheme, the likes of which the world has never seen.”

During an interview with CNBC, Harris explained his position by pointing out that there is “no relation between value and usefulness” in the Bitcoin and crypto space. However, like most critics, Harris agrees that blockchain technology has “terrific applications.”