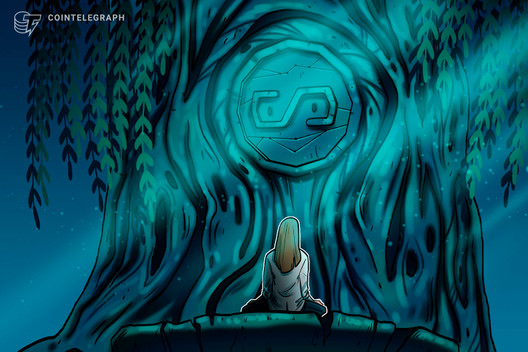 The news that WisdomTree, a major asset manager with $63.8 billion in assets under its belt, plans to launch a regulated stablecoin — pending approval from the United States Securities and Exchange Commission — could be a significant development.

It would bring a unique combination of being an enterprise level and having financial regulatory experience to the stablecoin arena — and if talks with the SEC go well, perhaps even the first U.S.-regulated crypto exchange-traded fund.

The stablecoin will be pegged to a basket of assets such as gold, fiat currencies and government debt, Cointelegraph reported on Jan. 12. However, no formal application or proposals appear to have been filed with U.S. regulators yet.

This development may signal a nascent competition among leading U.S. asset managers for dominance in the crypto sector. WisdomTree told Financial News, which first reported the story, that it “is rushing to launch a regulated cryptocurrency in the U.S. to get ahead of industry giants BlackRock and Fidelity Investments in the digital currency space.”

Fidelity itself wrote in a Jan. 9 report that “while there are yet unanswered questions, its [Bitcoin’s] position is cemented, and its potential cannot be ignored.” In December, State Street Corp., a top-five asset manager, announced a digital asset pilot project with crypto exchange and custodian Gemini Trust. Jonathan Steinberg, founder and chief executive of WisdomTree, said during the announcement:

“You want to be early. We came to ETFs 13 years after State Street. This gives us an opportunity to be ahead of the State Streets, Fidelitys, on regulated stablecoins.”

An exchange-traded fund is a basket of securities that are bought or sold through a brokerage firm on a stock exchange. WisdomTree specializes in ETFs and is the seventh-largest ETF provider in the U.S. It has been a leader in bringing ETF products to market, according to Sykes, who covers the firm as well as other asset managers — particularly its innovative Japan Hedged Equity Fund ETF (DXJ) and Europe Hedged Equity Fund (HEDJ). So, will a crypto ETF follow?

The firm itself has said a stablecoin is just a natural extension of its ETF business. In early December 2019, WisdomTree launched a physically backed Bitcoin exchange-traded product on Switzerland’s principal stock exchange.

A stablecoin is usually tethered to a relatively stable underlying asset, like the U.S. dollar or gold, and its creation-redemption mechanism is similar to an ETF, which helps keep values close to the underlying asset. This could help, at least in theory, with solving a persistent crypto problem: price volatility.

Stablecoins like Gemini Dollar and Tether that are pegged one-to-one with the U.S. dollar generally trade at about $1.00. Luciano Somoza and Tammaro Terracciano also compared Facebook’s Libra proposed stablecoin to the financial instrument:

“[Libra] feels like dejà vu for anyone familiar with ETFs. The creation-redemption mechanism is the same and ARs (authorized resellers), as defined by Libra, operate like authorised participants in the ETF market.”

WisdomTree has acknowledged that the structure of stablecoins and ETFs are similar, but product users would differ. The firm’s stablecoin is expected to be used mostly by cryptocurrency traders. ETFs, by comparison, are often marketed to mainstream investors.

Getting regulatory approval for a stablecoin or a crypto ETF is no easy matter. In the U.S., the SEC continues to place obstacles before the Libra stablecoin, and it hasn’t warmly welcomed crypto ETF applicants, either. More than a dozen ETF proposals have failed. Cameron and Tyler Winklevoss, the founders of Gemini, have been rejected twice.

Only this past week, Bitwise Asset Management requested the withdrawal of its SEC application for a Bitcoin ETF, “the second major ETF withdrawal in recent months following similar actions by VanEck,” as Cointelegraph reported.

However, recent misfortunes do not mean that it’s impossible to get a crypto ETF approved. SEC Commissioner Robert J. Jackson Jr. told Roll Call last year that “eventually, do I think someone will satisfy the standards that we’ve laid out there? I hope so, yes, and I think so,”

On Jan. 13, ETF Trends CEO Lydon told CNBC’s ETF Edge that the chances of a Bitcoin ETF happening within the next year stood at 60%. Worth mentioning is that another participant on the program, DataTrek Research’s Nick Colas, gauged the probability at only 10%.

Related: The SEC Does Not Want Crypto ETFs — What Will It Take to Get Approval?

One positive sign, according to Lydon, is that the SEC recently approved its first 1940 Investment Act-approved Bitcoin fund through the NYDIG Bitcoin Strategy Fund, a newly formed investment company that offers its shares for sale, though it has a limit of only $25 million. Lydon went on to add that the growing use of Bitcoin derivatives could help mitigate the BTC liquidity concerns that the SEC harbors.

“We’re still in the early stages,” Sykes told Cointelegraph. “We’re a long way from a regulatory framework that will embrace a Bitcoin ETF.” The continued fraud cases, the pump-and-dump flimflam and a fair bit of hype are slowing regulatory acceptance. The SEC remains concerned about potential market manipulation.

Meanwhile, WisdomTree is also investing in crypto infrastructure projects. On Jan. 7, it announced its investment in the startup Securrency Inc., one of the top institutional-grade blockchain builders in the financial and regulatory space, Cointelegraph reported.

The basic idea seems to be that an ETF can be more efficiently managed on a blockchain platform, bringing ETFs to a broader range of investors and enhancing the investor user experience, the firm said.

Overall, the crypto sector has struggled to gain validation from both institutional investors and regulators, and for that reason asset-manager WisdomTree’s multi-front embrace of regulated cryptocurrency and blockchain infrastructure can only be viewed in a positive light.

Ethereum Rallies 10% and Primed To Continue Higher Towards $150

CME Bitcoin Options Market Grew 10x in the Past Month