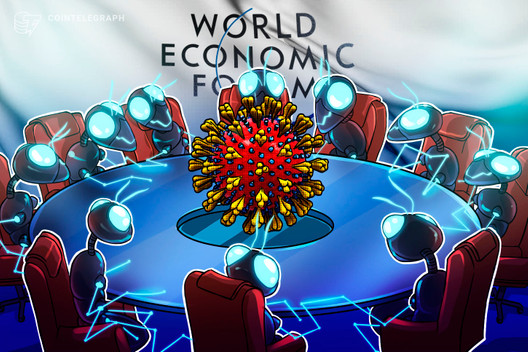 The World Economic Forum published a report looking at how the deployment of blockchain-based solutions can address the supply chain inefficiencies and failures that have been exposed by the COVID-19 pandemic.

Alongside the report, the WEF has released a blockchain deployment toolkit intended to assist government and businesses in adapting their supply chains to the current economic climate and to “accelerate an economic rebound post-COVID-19.”

The report, published April 28, asserts that the resilience of private and public supply chains have been tested amid the coronavirus outbreak — citing the supply chains of pharmaceutical products, medical supplies, and food among the sectors that have been hit the hardest.

The report argues that the efficiency of supply chains relies on transparency, advocating for the adoption of distributed ledger technology (DLT) to create a “shared truth” among supply chain stakeholders.

The World Economic Forum is a Switzerland-based non-governmental organization that was founded in 1971 to engage leaders in business, academia, and politics on key economic issues relating to the advancement of the global economy.

To assist business and governmental leaders in deploying blockchain-based supply chain solutions, the WEF has also launched its “Redesigning Trust: Blockchain Deployment Toolkit” — which is intended to enable “leaders to maximize the benefits and minimize the risks” associated with DLT.

The toolkit was developed for over a year and saw contributions from more than 100 public and private entities spanning 50 countries — including Deloitte, Maersk, the World Bank, and the World Food Program.

“The blockchain deployment toolkit is essential for designing solutions that work for a multitude of actors, including smaller players who may not have access to the resources required to unlock the value of blockchain technology,” said Nadia Hewett, the blockchain and digital currency project at WEF USA.

The DLT toolkit has been piloted in a variety of contexts including Saudi Aramco, Hitachi, and numerous small to medium-sized enterprises.

An increasing number of major companies and institutions have spearheaded ambitious programs to deploy blockchain across their supply chains in recent months.

“We see an acceleration of digitalization in Maritime Singapore, which has improved productivity and efficiency of the sector,” stated Quah Ley Hoon, the chief executive of the Maritime and Port Authority of Singapore.

“Blockchain has tremendous potential applicability in areas such as bills of lading, cargo-tracking, and trade financing,” she added.

The United Arab Emirates is also approaching the deadline for the completion of its Emirates Blockchain Strategy 2021 — an ambitious program with the goal of migrating 50% of governmental transactions onto DLT-based platforms.

Speaking to Cointelegraph, Rupert Colchester, IBM Australia and New Zealand’s head of blockchain, noted that many businesses are implementing DLT solutions across their supply chains in response to greater consumer demand for transparency.

Earlier this month, Cointelegraph reported that ethical egg producer Farmers Hen House had begun printing QR codes on their cartons to allow consumers to trace the origin of their produce.

Bitcoin May See a “Rug Pull” Scenario as Bulls Fail to...