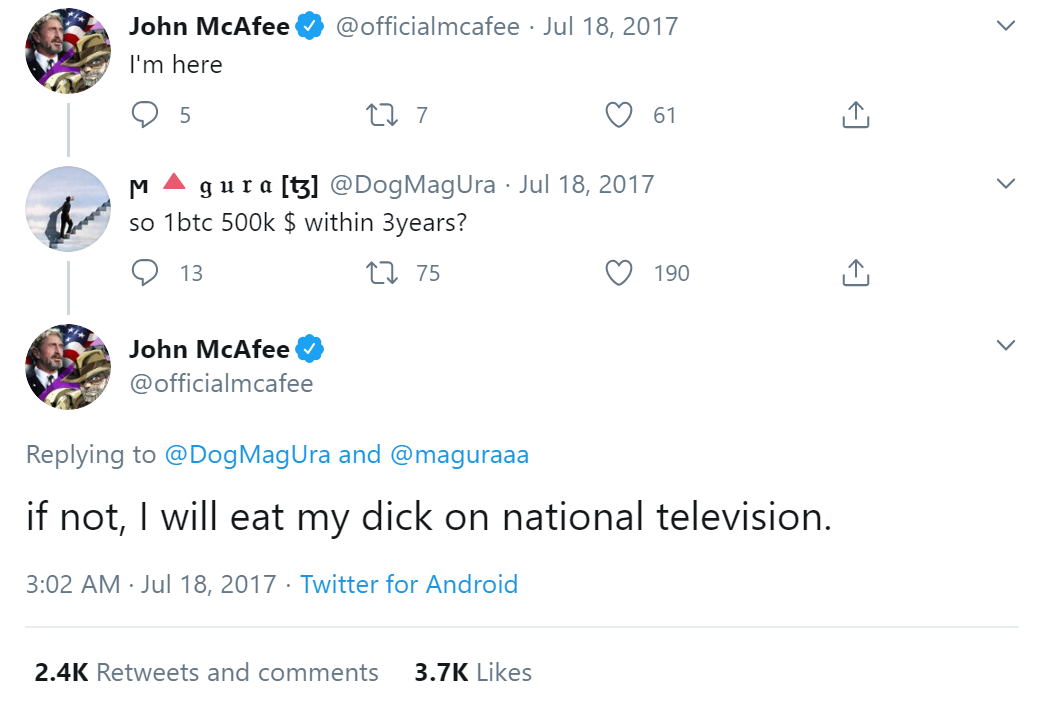 In general, Bitcoin quite clearly got nowhere near $500,000 in the past three years. Not only that, but McAfee is also seemingly backtracking from his $1 million per BTC prediction.

Last year, McAfee said he is positive Bitcoin goes to $1 million. He said negativity around the cryptocurrency market was overblown, especially considering Bitcoin was in the mid-$10,000s.

“Not going to get out of it. I never believed Bitcoin would hit $1 mil. It’s absurd. It’s an old, tired, worthless coin. I just wanted to eat my dick on TV. Wait for it.”

“Bitcoin is at the mid 10’s and people worry. LMFAO!! Why do you pay attention to weekly fluctuations? Look at the past few months FFS! It’s rising drastically. I’m still positive about my $1 mil BTC price by the end of 2020. Alt coins like MTC and Apollo will rise ten times more.”

Contrary to expectations, it also seems McAfee was referring to the end of 2020 as the prediction date for $500,000 per Bitcoin.

When several cryptocurrency enthusiasts questioned him about the subject, McAfee cited a website called dickening.com. The website says McAfee “promised to eat his own dick” if BTC does not hit $1 million by December 31, 2020.

McAfee said that it is “well documented” his bet was for Dec. 31 of this year, not July 2020. When asked about the bet, he reaffirmed that he would follow through with his bet if BTC does not hit $500,000.

“It’s well documented that I will eat my dick on Dec 31st 2020, not in July of this year. Google the bet. The ‘In three years’ was a reference to that date. The originator of this tweet did not research it. Will I eat it? You bet! Myself, or, perhaps, a subcontractor:)”

Max Keiser, the host of The Keiser Report and Bitcoin investor, sarcastically said McAfee must now be recovering at the hospital after honoring the bet.

“John McAfee honored his bet, made three years ago, to bite off his dick if Bitcoin wasn’t at $500,000 GOOD NEWS: He’s doing well at the hospital and expected to make a full recovery,” Keiser said.

Of course, McAfee’s track record shows that his predictions should be taken with a grain of salt. For instance, his facetious U.S. Presidential campaign now appears to be inactive. Then in May 2020, McAfee questioned his own price prediction, leaving many confused.

Nevertheless, for McAfee to win the bet, BTC price would now have to gain at least 10,000% over the next five months.

Hong Kong Wealthy Move Gold For Security, Why Bitcoin Is The...