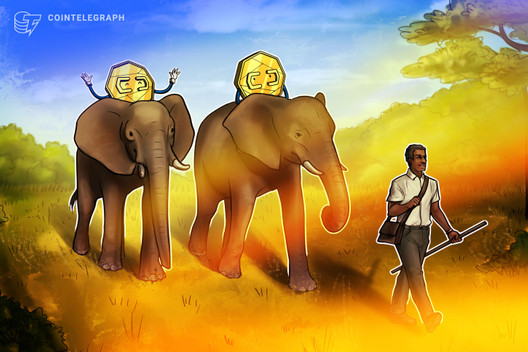 The Reserve Bank of Zimbabwe, the country’s central bank, is considering a regulatory sandbox for crypto companies in an apparent change from its previous anti-cryptocurrency stance. The proposed sandbox is reportedly part of a broader agenda by authorities in Zimbabwe to revamp the nation’s financial sector, which has seen massive hyperinflation since 2007.

Meanwhile, Zimbabwe’s government is also partnering with Apollo Fintech to develop a gold-backed cryptocurrency for the country. The collaboration is expected to allow Zimbabweans to have access to the Apollo wallet for digital-currency payments.

Despite the government’s 2018 crypto ban, peer-to-peer trading of cryptocurrencies continues to thrive in Zimbabwe, as the country’s faltering monetary policies seemingly push investors toward digital currencies. In mid-2019, cryptomania in Zimbabwe reached such a fever pitch that false rumors about the price of Bitcoin (BTC) reaching a 600% premium began to spread.

The RBZ’s plan to create a regulatory testing environment for local crypto companies also comes at a time when the government is reportedly exploring plans for a central bank digital currency.

As previously reported by Cointelegraph, the RBZ has reportedly proposed a regulatory sandbox for local crypto businesses. Cointelegraph has since confirmed that Josephat Mutepfa, the RBZ’s deputy director for financial markets and national payment systems, revealed the plan in a speech delivered at the Sound Prosperity Economic Forum in Bulawayo on March 13. An excerpt from Mutepfa’s address reads:

“We have already started to come up with a fintech framework because in regulation everything should be well-structured. The framework, which is a regulatory sandbox, will be assessing cryptocurrency companies as to how they are going to operate. The sandbox will be an experimenting zone. Once the sandbox is there, there will be an application criterion, which will also act in the same capacity as the sandbox.”

According to Mutepfa, Zimbabwe’s central bank is keen on creating a robust vetting framework to ensure that participating crypto businesses model their operations to suit existing financial regulations in the country. As part of its initial plans for the crypto-regulatory sandbox, the RBZ is reportedly focusing on companies dealing in cryptocurrency-related trading and remittance.

For Mutepfa, the proposed sandbox signals a pivot by the RBZ and the Zimbabwean government regarding its stance on the emerging digital economy, following a 2018 ban on financial institutions participating in crypto transactions.

Related: Countries That First Outlawed Crypto but Then Embraced It

Given the popularity of digital assets among the country’s younger demographic, Mutepfa opined that it was incumbent on the RBZ and the country’s government to work out methods for regulating the industry rather than focusing on prohibition. By ensuring greater government involvement in the digital sphere, he argued that issues such as access to capital can be mitigated, thus allowing small- and medium-scale cryptocurrency businesses to blossom in Zimbabwe.

Commenting on the RBZ’s plans to create the regulatory sandbox, Marius Reitz, the general manager of Africa for the Luno crypto-exchange platform, hailed the decision as a positive one for Zimbabwe’s digital-currency space. In an email to Cointelegraph, Reitz declared:

“The new sandbox is excellent news. It will be critical for bringing more clarity and protection, which will only help crypto’s transition into mainstream use. Some people believe that regulation will stifle adoption but we believe it can play a major role in boosting trust in our sector, which we know is a huge barrier for adoption.”

According to Reitz, the creation of the regulatory sandbox will open the way for constructive dialogue among crypto businesses and regulators, stating, “It’s important that there’s a strong relationship between these two stakeholders so crypto firms know what regulation to expect and how they can best protect their customers.”

According to Mthabisi Tshuma, a business correspondent at the Zimbabwean daily The Chronicle, the government appears keen on legitimizing the crypto industry as part of its drive to improve the country’s financial sector. In a conversation with Cointelegraph, Tshuma remarked:

“The cryptocurrency market in the country is under review and if all goes well the government will adopt it into the financial sector as stated in last year’s monetary policy.”

In its monetary policy statement from February, the RBZ revealed that its focus was on stabilizing its currency. Having suffered massive hyperinflation since 2007, the bank appears intent on eradicating the volatility of its exchange rate through the establishment of a currency-stabilization task force. According to the RBZ, exchange-rate stabilization will result in a corresponding decrease in inflation, thus leading to significant economic recovery for the country.

As part of the currency-stabilization efforts being spearheaded by the country’s finance minister, the RBZ plans to set up a Reuters-based platform for electronic foreign exchanges that will allow free forex deals among participating banks. Authorized currency-exchange agents will also be allowed on the platform via authorized dealers.

While there is no official word from the government, a crypto regulatory sandbox established by the RBZ could be a precursor to the legalization of cryptocurrencies in the country. For now, crypto remains largely unregulated in sub-Saharan Africa, where the two Southern African nations of Zimbabwe and South Africa appear to be on a trajectory toward cryptocurrency legalization. For Zimbabwe, the goal might be tied toward leveraging its digital economy as a means of alleviating economic issues, while for South Africa the emergence of clear-cut laws might help to combat the many instances of virtual-currency scams in the country.

So far, however, there have been reports of commercial banks in South Africa closing accounts belonging to crypto exchanges, citing the absence of regulatory clarity for the country’s cryptocurrency industry. As reported by Cointelegraph in December 2019, the South African Reserve Bank is considering the introduction of new cryptocurrency regulations. These laws reportedly focus on rules that will prevent the use of digital currencies for money laundering and tax evasion.

According to Reitz, the South African Reserve Bank is in consultation with industry stakeholders to craft a meaningful regulatory framework for South Africa’s crypto space. As part of his email to Cointelegraph, the general manager of Africa for Luno revealed:

“The SA Reserve Bank has established a working group (including players from the industry) to craft a regulatory framework for cryptocurrency, so it could be explored in the future. With South Africa ranking as the third-highest country with Google searches for bitcoin, crypto is definitely a growing industry in South Africa and we’re sure the authorities are keeping a close eye on developments.”

Zimbabwe’s government is also reportedly partnering with Apollo Fintech to launch a gold-backed digital currency for its citizens. On Friday, Apollo announced that it has signed a memorandum of agreement with CBZ Bank — one of the country’s largest commercial banks — to develop three national fintech projects. The proposed gold-backed digital currency is one of the three projects currently being developed by Apollo for CBZ with the backing of the Zimbabwean government.

Given the less-than-stellar record of Zimbabwe’s government on matters relating to its national currency, crypto adoption might present a viable solution. However, asset-backed digital currencies have yet to show any evidence of success.

Venezuela’s oil-backed Petro has so far failed to make any significant progress despite concerted efforts by the country’s government to enforce the adoption of the digital currency. Like Zimbabwe, Venezuela is also suffering from massive hyperinflation, a situation further worsened by economic sanctions imposed on President Nicolás Maduro’s administration by the United States government.

Apollo Fintech CEO Stephen McCullah said he was excited to work with the Zimbabwean government. In a tweet published by the company on Thursday, Apollo identified Zimbabwe as a “priority country” for the live implementation of its suite of national crypto and financial solutions.

If the other yet-to-be-announced projects include an interbank settlement network, then Zimbabwe will be joining the likes of Iran in utilizing fintech to revamp its ailing financial sector.

CoinZoom Disrupts the Remittance Landscape With 0% Commission And Cryptocurrencies